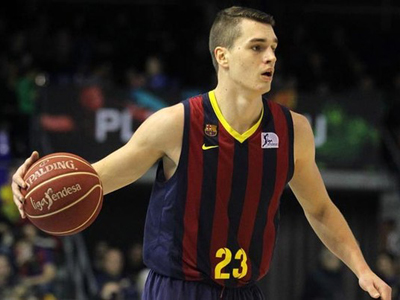 Making his Croatian A1 League debut for KK Dubrovnik shortly after his 14th birthday in 2009 and staking his claim as one of the future stars of the European game at the 2011 Jordan Brand International Game, if it feels as if Mario Hezonja has been on the NBA Draft radar for an eternity, it's because he has. Identified as a potential lottery pick very early in his career, but opting not to enter his name in the draft in 2014, the first year he was eligible to do so, the stars appear to have aligned for the athletic Croatian swingman as he went public with his intention to declare for the 2015 NBA Draft on April 23rd.

Hezonja is one of the most intriguing talents in this draft class, showing an impressive blend of athleticism and shooting ability while carving out a role off the bench for FC Barcelona in the Euroleague and ACB, the top leagues in Europe. Signing a seven year deal with the Spanish powerhouse prior to the 2012-2013 season, Hezonja served as the primary scorer on Barcelona's 2nd team in the LEB Gold during his first year in Spain amid sporadic appearances for the club's 1st team in mop up duty. Averaging only 9.6 minutes per-game playing for Barcelona's senior team a year ago and 15.5 this year, Hezonja's talent has shined brightly at times over each of the last two seasons, as he's exploded for a number of big scoring games while playing an otherwise modest role.

Standing 6'8 with a decent wingspan and a solid frame that could continue to fill out over time, Hezonja has outstanding size for a shooting guard. He's also an effortless athlete who runs the floor exceptionally well, has nice quickness, and can finish plays above the rim, ranking among the most impressive physical specimens we've seen among European prospects in recent memory.

Besides his physical attributes, the most appealing part of Hezonja's game is his offensive skill-set, which has helped him earn minutes, albeit inconsistently, for one of Europe's premier teams. Combining supreme confidence with tremendous fluidity and coordination, Hezonja's offensive game starts with his jump shooting ability both when spotting up and running off of screens within set plays. He shoots the ball with an effortless, high release point that will translate nicely to the NBA three-point line in time.

Connecting on 39.6% (57/144) of his attempts from beyond the international line on the year. including an 8/8 performance against Manresa in the ACB on February 1st, the Croatian swingman is capable of running very hot from the perimeter, but also has the ability to put the ball on the floor and attack off the dribble if the defense closes out too aggressively.

Though 60% of Hezonja's field goal attempts are three-pointers, one of the highest marks of any player in our mock draft regardless of league, and he has scored a fantastic 1.34 points per spot up possession according to Synergy Sports Technology, Hezonja's potential at the NBA level extends well beyond his talents as a set shooter, even if that's an area the team drafting him will hope he can contribute in early on.

A capable ball handler, Hezonja also flashes the ability to create his own shot, notably as the ball handler in the pick and roll. His ability to explode past the defense with his strong first step off the dribble make him a threat to get to the rim, and he has a bit of shake to his floor game as well, showing the ability to use step backs to create space for his jump shots. Making 42% of his pull-up jump shots and finishing at a 62% clip around the rim, Hezonja's scored efficiently in a variety of ways this season.

On top of his overall offensive skill level, Hezonja's athleticism also allows him impact the game in a variety of areas. He's a target to cut back-door for lob passes thanks to his leaping ability, and he runs the wings exceptionally hard in transition. Though he isn't a particularly consistent defender, he can make contributions when he's focused with his terrific quickness and size. He has some truly impressive moments defensively playing scrappy, energetic one-on-one defense, shadowing his man running off of screens, and getting in the passing lanes thanks to his speed and anticipation. Hezonja's combination of athleticism, instincts, and talent allow him to contribute at in a wide variety of ways, which is part of the reason his upside is nothing short of tantalizing in the eyes of NBA decision-makers.

Despite all his merits as a prospect, it is important to note that Hezonja is not without his flaws, which should come as no surprise considering he's just 20 years old. Playing on a short leash surrounded by talented veterans in Barcelona, the young wing posted his gaudy scoring efficiency numbers in a small role, as he averaged only 6.1 points per game and is still learning how to utilize his tremendous tools consistently.

Scoring in double-figures in 11 games but going scoreless in 10 others and playing sporadic minutes when Barcelona has had a full stable of healthy guards, Hezonja, like any young player competing against competition, has struggled with bouts of ineffectiveness. Hezonja's worst moments this season have come in situations where the intersection of his talent and confidence have led to him settling for difficult shots in the half court and looking to do too much with the ball in his hands in transition and on the pick and rollsomething that is frowned upon far more in Europe from a player his age than it is in the States.

He can take and make difficult, contested shots with deep range, and throws some highlight reel passes, but doesn't always pick and choose his spots as well as one might hope or seem quick to recognize openings for others. He can be turnover prone when he puts the ball on the floor as his handle is a bit rigid, and often tries to get creative instead of drawing contact and forcing whistles when he ventures inside as his extremely low 1.6 free throw attempts per-40 minutes pace adjusted average reflects.

Questions also remain about Hezonja's ability to defend consistently. Those questions don't revolve around his actual ability to defend as much as they're based on his sometimes non-chalant approach on that end of the floor. He tends to run very hot and very cold in terms of his intensity as his worst moments are just as glaring as his best ones. Hezonja could stand to get stronger, but his combination of size and quickness seemingly give him the potential to hold his own if he's committed to being a factor on this end of the floor. The question is, in a long 82-game season, where minutes will be handed to him much more easily than they were in Europe, will he feel the desire to get in a stance and compete at max intensity on every possession?

As we've noted in previous reports one of the more significant ongoing concerns about Hezonja is his demeanor. His body language is poor at times and he seems to get down on his teammates. Though he's become far less demonstrative than he appeared at the junior level, it will be fascinating to watch how his swagger, ego and unlimited self-confidence fit in on whichever team opts to draft him. His mentality could pay huge dividends if he reaches his lofty potential down the road, but what kind of growing pains will he experience early in his NBA career?

As with many elite international prospects competing at the highest levels, there's also a notable economic element to Hezonja's future due to his contract situation. As is often been the case, there's a fair amount of confusion surrounding his situations, but as it stands, the seven year contract he signed three years ago includes a team option to extend his deal for its final four years on May 31st. Barcelona will certainly pick it up and Hezonja doesn't have an option to terminate, meaning he'll have to pay his NBA buyout, which stands at 2 million Euro, before he makes the jump across the Atlantic. Though he may have to take out a loan and pay interest to make that payment up front, this shouldn't have a major impact on his draft stock or his decision to stay in the draft as he's a likely top-10 pick.

At face value, Hezonja looks like a player who should be able to find a way to contribute to some degree early in his NBA career with the potential to grow into a star down the road. Few international players we've ever covered enjoy the same clear-cut NBA upside. The question is just how quickly his flashes of brilliance will become extended stretches of productive play on both ends of the floor and whether his attitude becomes a hurdle between those two points.
Read Next...