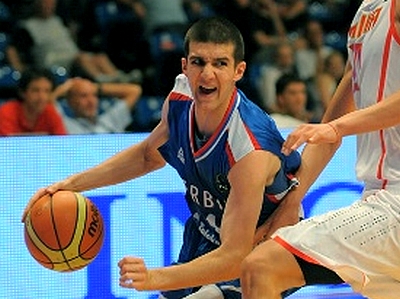 Jonathan Givony
@DraftExpress
After a full weekend spent evaluating some of the top 1993 and 1994 born prospects in European basketball at the NIJT in Belgrade, we report back with our findings. We'll start with the MVP of the tournament, Aleksandar Cvetkovic.

The MVP of the Nike International Junior Tournament in Belgrade, this weekend was likely a major turning point in Aleksandar Cvetkovic's career.

Left for dead after a knee injury sidelined him for a period last year, and facing intense pressure from all directions causing him to stumble as he tried to recover over the summer, Cvetkovic bounced back in a huge way to dominate some of the best point guards in his European age group.

He managed to bring home a surprising championship by defeating the heavily-favored tournament hosts, FMP, in one of the most intense and well-played junior finals we've ever seen. His team will now participate in the NIJT finals at the Euroleague Final Four in Barcelona, something they didn't anticipate or budget for going into the week.

Already seeing solid minutes at the senior level for Red Star this season, Cvetkovic performed with a maturity and confidence that you rarely see from a prospect this age. He looked as sharp and decisive as a 17-year old can, playing a flawless final game that went far beyond the incredible stat-line of 35 points (12/17 FG, 9/9 FT), 9 rebounds, 8 assists and 0 turnovers.

Not particularly impressive from a physical standpoint on first glance, Cvetkovic is undersized at around 6-1, and doesn't have a great frame or wingspan to compensate. What he lacks in initial impressions he more than makes up for once you start watching him play, though, as he simply controls the game in a way that only a great point guard can. He has quick feet, outstanding footwork, the ability to operate at different speeds and phenomenal ball-handling skills, allowing him to get to virtually anywhere he wants on the floor, at least at this level.

Cvetkovic is a pretty complete player from an offensive standpoint, as he's able to make his impact felt as a 3-point shooter, a slasher, a passer or by pulling up off the dribble from mid-range. He takes what the defense gives him and is absolutely decisive with his decision making, playing with utmost creativity and confidence.

Able to drive equally well in both directions and stop and go with choppy, tricky and highly polished footwork and hesitation moves, Cvetkovic is more likely to finish plays with a pretty floater than he is to drive all the way to the basket and elevate amongst the trees. That's probably a good thing considering his small, skinny stature, but might be something to keep an eye on as we continue to track his progress over his career. He has soft touch on his finishes and the ability to stop on a dime for a pull-up from 15 feet, as well as consistent range out to the 3-point line.

As effective as he was as a scorer (at 29 ppg) at this tournament, where Cvetkovic was at his best was as a playmaker. He shows the ability to make every type of pass a point guard needs, and does so unselfishly and with perfect timing. Be it a lob into the post, a bounce pass, an underhanded scoop into the paint to a streaking big man off the pick and roll, or a simple kick-out to an open shooter spotting up on the opposite wing, Cvetkovic is a pure point guard who enjoys making others better. He's highly respected by teammates, shows terrific leadership skills, is extremely competitive, and appears to have a perfect demeanor for his position, never looking rattled and always being quick to encourage or congratulate. It's clear that being elevated to Red Star's senior squad this summer and seeing solid minutes at the very competitive Adriatic League level has done wonders for his confidence.

Defensively is where Cvetkovic will likely struggle the most at the pro level. Undersized, lacking great length or lateral quickness, and sporting a narrow frame, he lacks the physical tools to be a great presence on this end of the floor. The extremely creative Nenad Miljenovic was able to get by him time after time in the finals, and Cvetkovic wasn't able to offer much resistance. This will likely be the biggest hurdle he must overcome if he's able to reach his full potential as a player down the road.

All in all, it was tough not to come away extremely impressed with the way Cvetkovic performed in Belgrade. While his upside may not be off the charts, there is clearly a huge market for incredibly smart and skilled point guards with great intangibles. How far he'll be able to take his talentsbe it the NBA or high-level Europeis a question that will likely be answered as we see how he's able to perform at the pro level with Red Star over the next year or two.
Read Next...