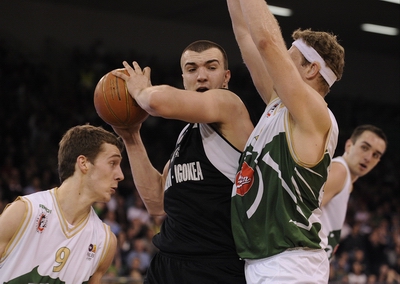 In a controversial decision, the Euroleague chose Danilo Gallinari over Nikola Pekovic as the winner of the Rising Star award that honors the best young player in the competition. Still, the Serbian center wont likely be sulking about it for too long after leading his team Partizan to win the Adriatic League, earning in the process MVP honors and our Player of the Week nomination.

Partizan validated its dominance of this year's Adriatic League by beating Union Olimpija and Hemofarm in this past week's Final Four. Pekovic had 31 points and 5 rebounds in the semis, while settling for 22 point and 7 rebounds in the final, combining for 19/25 from the field.

3096[c]Photo: ABA League[/c]
As usual, he did all his damage around the basket, showcasing his ability to establish great position inside and emerging as almost unstoppable once he received the ball. Pekovic is not a go-to guy in the sense that hes a creative force that facilitates his teams offensive flow, but he's such a big threat that his sole presence makes his team's offense run smoothly due his own ability to finish around the rim and the spaces he generates for his teammates with the defensive help he regular draws.
Partizan should find no opposition on its way to the Serbian championship as well; it will be way more difficult to retain all its young gems, starting with Pekovic. As we stated a few months ago, he has pretty much all but boarded the plane for Panathinaikos, as everything regarding his transfer there has already been agreed upon. Even though he would normally garner a considerable amount of interest in the first round with the incredible season hes had, the inevitably of him staying in Europe for a considerable amount of time, along with the verbal discouragement hes given teams from drafting him (saying that he just does not like the NBA) will almost certainly drop him to the 2nd round.

Danilo Gallinari celebrated his Euroleague Rising Star award that honors him as this seasons best youngster with another very productive outing in the Italian League. He had 19 points, 7 rebounds and 3 steals, in front of a large number of NBA scouts and executives, although his team couldnt beat Upim Bologna. Danilos streak of double-digit games in the scoring department continues, and hes yet to fail reaching the 10-point mark this season in the Italian League, which sounds like unbelievable consistency for a 19-year-old player. With the regular season now in the books, Gallinaris team will face 4th seeded Montegrenaro in the playoffs, with his team Milano being the 5th seed.

Alexis Ajinca came off the bench for Hyeres-Toulon to offer a significant performance in his team's victory over Gravelines, providing 17 points, 7 rebounds and 3 assists in just 19 minutes of playing time, showing again that he usually produces when he's given playing time.

Dejan Ivanov has dramatically improved his production in the Croatian championship once the Adriatic League is over. Last week he contributed with 23 points, 6 rebounds and 2 steals to Splits victory over Dubrava, and he averages 21.4 points in the last five games.

Vladimir Dasic has delivered a completely forgettable season for Buducnost in the Adriatic League, actually having regressed from the previous campaign. Usually playing as a perimeter-oriented face-up power forward, he has looked extremely inconsistent with his offensive game. Netting only 18.7% of his three-point attempts, he has been more prolific with his perimeter shots rather than the two-point attempts, which has resulted in very ineffective production (a horrible 35.7% from the field). Dasic hasnt been able to smooth out his mechanics, and hes settling for pull-up jumpers way too often.

Meanwhile, he hasnt been able to build a solid slashing game. Hes a very decent ball-handler and pretty quick for a power forward, but he doesnt look particularly skilled when it comes to going inside and finding a way to score, force a foul or dish the ball, lacking some better use of his body, more refined ability to finish around the rim against opposition and savvy reading defenses. Also, his off-the-ball game is far from outstanding. Indeed his basketball IQ looks average at this point. Underwhelming in the rebounding department (3.7 captures per game), hes not showing great desire and positioning. Defensively he looks a bit better, showing nice lateral quickness and some intensity, but sometimes suffers as a tweener going against bigger inside guys.

All in all, this is pretty disappointing coming from a guy who looked really promising a few years ago.

Henk Norel is entering his name in the draft, as his agent Peter de Bos has confirmed us. The young Dutch will test the waters, and his camp wont likely make a decision about staying or withdrawing until the deadline.

A very interesting long-term prospect, Norel would almost certainly find some love in the second round of the draft should he decide to keep his name in. At the same time, his potential to climb higher and reach the first round next year looks seriously limited, as he will likely need more time to establish himself as a consistent and productive guy in the ACB League, where he will play next season for Joventut.

According to his agent, Norel is taking his career step by step, working hard on his game and taking things one step at a time. Hes currently playing on loan in Alicante, in the LEB League (Spanish second division), and even if hes dreaming of the NBA just like any other kid, he really wants to play in the ACB League.

Joventut is a perfect place for a young player like Norel. He will enjoy an excellent coaching staff there and a youth-friendly culture that will likely provide him with regular playing time, while he can challenge the best competition in the continent playing the ACB and, next season as well, the Euroleague. Besides, he might also be able to play more extended minutes as a face-up power forward, perhaps the most natural position for this multi-talented player, rather than being stuck exclusively in the paint, where he still gets out-muscled despite the visible progress hes made in the physical development.

Indeed, following in the footsteps of Rudy Fernandez and Ricky Rubio, it seems like Joventut is greatly en vogue these days, and even Serge Ibakas agents are openly saying to anybody willing to listen that they want the young African there.

Back to Norel, he has two more years left on his contract with the Spanish team, so he would be free by 2010 (nice timing considering his development process and the great situation hes in right now), and even if some deal is worked out with Joventut to extend his contract, they would seek a reasonable buyout, according de Bos. For the moment, he is invited to Treviso in June to play in the Reebok Eurocamp, although Joventut would have the last word on it (Norel is expected to join the first team practices once the LEB season is over).

All in all, hes another international big to fuel a nicely intriguing crop that also includes the likes of Ajinca, Ibaka, Asik, Pekovic, Jawai or Erden.

Every draft process brings an endless list of international guys declaring (not so endless since the limits on declaring for the draft [twice] was established), including some pretty much unknown guys. Testing the waters or not, some of them are legit NBA prospects, while others look more like intruders to a party to which they have not been invited.

Herb Rudoy has informed DraftExpress that, besides Omri Casspi, his agency Interperformances will have three Ukrainian players declaring for the draft.

One of them, Sergei Ilin, is a complete unknown to us. Actually, his name is nowhere to be found in the net, which takes the mystery man label to a whole new level. In fact, even our friend Vitaly Lebedintsev, a General Manager and coach of a Ukrainian league team, and former junior and senior national team head coach, has seemed to never have heard of him. The mythical Ilin is 7-6 by the way.

The other two guys regularly play for Dnepro in the Ukrainian Superleague, and we actually had a chance to take a quick look at them.

Maksim Vilkhovetskyi is a 6-4 (could be slightly shorter) combo guard born in 1988, physically pretty mature, pretty quick, decently athletic, rather strong, a surprisingly good defender but average offensive player. He doesnt look particularly creative nor a noteworthy distributor, hes way too in love with his extremely inconsistent perimeter jumper and, from the small sample we could watch, he didnt look aggressive enough attacking the basket, pretty disappointing for a relatively strong guy who also happens to enjoy solid ball-handling skills.

Maxim Korniyenko is a 6-10 forward born in 1987, but rawer than his teammate, nothing more than a decent athlete, not very explosive, skinny, but who enjoys long arms and a decent frame, and shows signs of budding but so-far ineffective versatility. We could see him missing a mid-range jumper with decent mechanics, putting the ball on the floor with his off hand for an underwhelming slashing move, being completely out-muscled in the low post, or trying a nice pass by the baseline that ended up out of bounds.

Really nothing to write home about for any of them. The strategy would likely be to make their names better known, but unless they develop dramatically in the future, they dont really look like draft material.

On the other hand, we got word today that the Early-Entry list will feature two better known players that will likely draw some attention to themselves. One is Nando De Colo, who weve written about extensively on this blog over the past few months, and the other is Jonas Jerebko, a Swedish forward who was named MVP of the U-18 European Championships Division B last summer. Both seem to be putting their name in with an eye on next year, as a means of drawing some buzz before they become automatically eligible in advance of the 2009 draft. De Colo is the better prospect of the two, already a star in the French first division, while Jerebko plays in a stronger level of competition with Biella, but is just a rotation player at this point. Well surely see Jerebko in Treviso, while De Colos situation is more up in the air due to the French national team.
Read Next...