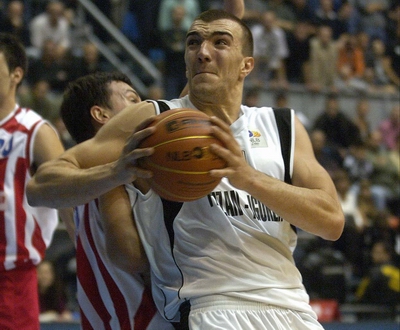 Luis Fernández
@DraftExpress
We have no choice but to award Nikola Pekovic our Player of the Week honors once again. Hes just destroying opposing defenses with his ability to finish around the basket, and this week both Chorale Roanne and Crvena Zvezda got a taste of his devastating game. We also take a look at Mickael Mokongo. The small French point guard is delivering a very nice season in the Turkish League.

Player of the Week: Nikola Pekovic

Two more monster games, and thus, another Player of the Week nomination for Nikola Pekovic. The Serbian big is blossoming this season after the departure of Kosta Perovic and Predrag Drobnjak. He had to step up in order to fill the void in the middle and, so far, nobody is missing those two in Partizan Igokea.

Its only two games into the Euroleague season, but Pekovic already leads the efficiency ranking and field goal percentage stats, while coming up second in scoring. Thats what happens when, after a MVP performance, the guy goes for 23 points, 7 rebounds and 3 assists against Chorale Roanne, actually helping his team to collect an extremely important road victory in order to achieve a surprising 2-0 record.

That good start is well reflected in the Balkan competition as well, where Partizan leads the Adriatic League with a 7-1 record, after beating Crvena Zvezda, likely their biggest rivalry game in the competition (considering were talking about the Balkans, that means a super hot game). Pekovic was again the scoring anchor for his team, with 23 points, 10 rebounds and 3 blocks.

Nikola Pekovic is for real. Of course not every week will be like the last two, but hes most likely going to deliver a superb season. As long as his team keeps playing smart basketball, hes going to take advantage of every ball he receives in the paint. His effectiveness down low is proving to be ridiculous: after 10 games combining his Adriatic League and Euroleague outings, he is hitting a ridiculous 72% of his field goals. And as we expressed last week, its not like hes dunking the ball every time.

Although not a high-profile prospect for the NBA, its always interesting to dig into good young players, and Mickael Mokongo is showing that hes already a very useful point guard in Europe.

Its not the most common thing to see a very young French player looking for a job outside his country in the early stages of his career, but Mokongo has already played in Italy and this season he sweats the Banvit jersey in the Turkish League. He hasnt needed much time to adjust: officiating as the starting playmaker, he averages 14.8 points, 3.4 rebounds and 4.6 assists, scoring in double digits in every single game of the season (5 to date).

A very small point guard, clearly under six feet, Mokongo makes up for it with his excellent quickness, nice athletic profile in general and his remarkable strength. He shows a rather wide body (relatively speaking while considering his youth) which is nicely built. Hes quite an electric guy on the floor, capable of coming up with short efforts at great speed. He looks terrific in the open court, providing great rhythm to the team in transition.

Not the most creative guy around, Mokongo doesnt stand out with his court vision. Hes more of a drive-and-dish player that uses his quickness to break down defenses. And even if he can eventually get a bit out of control, hes a heady player considering his strengths and main weapons. He usually knows when to push the trigger and when to circulate the ball. A very good ball-handler, Mokongo can attack both ways, either to pass the ball or look for the basket. However, his small size seriously hurts his ability to finish around the rim. He can use both hands there, but he doesnt look particularly effective with creative layups against opposition. Actually, its often easier for him to force a foul and pay a visit to the charity stripe.

Mokongo is a lot more consistent with his shooting stroke. He has range out to the three-point line and nice quick mechanics. He can shoot off the dribble, but looks more reliable in spot-up fashion. Again, his limited size doesnt allow him to go for the jumper unless he enjoys some space to release it. All this obviously means that Mokongo cant create his own shot on a regular basis.

On defense, he showcases his excellent lateral quickness. Blessed with very good feet, he can put a lot of pressure on the ball, and hes not the typical gambler looking for steals. Indeed, Mokongo looks like a rather mature player. He even sometimes becomes a leader on the floor, vocal and supportive with his teammates. Anyway, unless he figures out how to consistently produce points off his slashing attempts, hes probably not going to be considered incredibly interesting draft material. And still, under six-feet players are not the most desired bargains. Still a nice player, thats for sure.

Nicolas Batums basketball show is still on display all across Europe. Le Mans challenged Aris in the Euroleague, led by the French swingman with 13 points, 5 rebounds and 2 assists. In the domestic competition, they rolled over Le Havre and Batum improved to 15 points, 5 rebounds and 3 assists. To the extensive report published here last week we have to add another very interesting plotline that Nicolas is showing in his game lately. The French swingman is increasingly using his terrific length in the paint, sometimes asking for the ball in the low post in order to exploit the size differential he enjoys over his opponents, and therefore adding versatility to his game.

Nando De Colo is one of the young sensations in the French League. This 6-5 combo-guard born in 1987 is becoming a very important piece in Cholet. This past weekend he came off the bench to deliver 26 points, 2 rebounds, 10 assists and 3 steals, leading his team to the victory over Hyeres-Toulon. De Colo played this summer in the U-20 European Championship, becoming one of the main forces in the French squad.

Dusan Sakota is employing his shooting touch in Panionios this season. Coming from Panathinaikos, hes now looking for playing time and trying to solidify his game against veteran competition. This weekend he shined with an almost perfect game from the field to score 18 points and grab 5 rebounds in the close victory against AEP Olympias.

Joe Ingles is one of the youngsters in top shape right now. Ever since the new campaign started, he took over a significant degree of leadership in South Dragons while an increased production. The good news is that his team has started to win games, this past weekend the second in a row, with Ingles leading the way with 25 points, 5 rebounds and 10 assists.

Milos Teodosic is suffering the consequences of playing for one of the richest teams in Europe. Olympiakos is an incredibly deep team, with extremely talented players, and theres not always room for a young guy, even if a phenomenal distributing point guard like him. The million-dollar signing of Lynn Greer became the worst possible news for him, as the American scoring playmaker soon emerged as the team leader on the court. Also suffering the competition of Roderick Blackney, coach Gershon has eventually used Teodosic as shooting guard, which might work given his size and shooting stroke, but isnt a great solution since hes a lot better player with the ball in his hands. His decreasing importance in the team is well reflected by his minutes on court in the Euroleague, 13 in the opener against Tau and 5 in the following game against Union Olimpija, while he only played a few seconds in this weekends derby loss against Panathinaikos.

Serge Ibaka is back. FIBA sent the players transfer this past week, and Ibaka could play again in the LEB this past Saturday. It wasnt a good showing for him. Looking a bit rusty and out of rhythm, he made some mistakes and overall wasnt very productive.

Serge barely played off the dribble, and actually looked extremely uncomfortable the lone time he took the ball up-court. He basically asked for the ball in the low post or in the mid-range area to settle for jumpers, even if he sometimes looking a bit passive playing off the ball. He was pretty erratic with his shot, but one of his misses brought the games highlight, as Ibaka rebounded his own missed jumper to directly put it back with a powerful dunk. He had some problems to establish position in the low post, but in one situation where he could receive the ball, he looked pretty solid going for a turnaround jumper (although it was a simple move that didnt require great footwork). He gets pretty high off the ground to release the ball, so its not easy to contest him.

Ibaka wasnt very focused on defense, easily getting into foul trouble after forcing some unnecessary fouls, and eventually suffering with a lateral move against another power forward, although his lateral quickness is not expected to be a problem at that position.

The big man from Congo finished the game with 6 points and 4 rebounds in 16 minutes. Anyway, it would be a mistake to draw any real conclusions from this rusty showing. Once he gets into rhythm, we will be able to provide a more fair evaluation.

It seems like we have yet another chapter in the crazy world of Aleksandar Ugrinoski going on, promising us new adventures for the talented Croatian point guard, this time in the American Developmental League. After declaring for the D-League draft, he is headed to play a season with the Utah Flash, the team that picked him in the third round. Good luck to him.

To finish this edition of the roundup, let's celebrate the successful debut of Donatas Motiejunas with Zalgiris in the BBL. He scored 15 points and had 2 blocks against a strong team in ASK Riga, although he came up empty in the rebounding department. Anyway, not bad for a kid who only recently turned 17 years old.
Read Next...