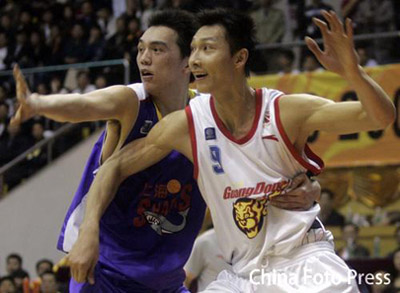 Luis Fernández
@DraftExpress
It took only one game for Yi Jianlian to show his credentials in the CBA playoffs, with a 38-point performance to ignite Guangdongs dominance in the postseason. Thats why the Chinese big has earned Player of the Week honors this time. With a less eye-popping stat-line, but battling at the very top international level, we also follow Ricky Rubios impressive showing against Olympiacos in the Euroleague.

Player of the Week: Yi Jianlian

The CBA playoffs started last week and only Guangdong remains undefeated in the quarterfinal series (2-0 over Shangai). Yi Jianlian has been the anchor for his team on the court, with two excellent performances to feed the buzz about his draft stock.

Yi particularly shined in the opener, netting 38 points and capturing 10 rebounds. He was deadly with his mid-range jumper, knocking it down with terrific consistency. He made an excellent turnaround shot and also a couple of jumpers off the dribble. Hes not a Nowitzki-type of shooter, of course; he just tries to get closer to the basket if he enjoys the space to advance: just one or two dribbles and he gets up for the jumper. Actually, he already struggles from the international three-point line, so he likes to step into the arc to feel more confident about his stroke (in this game he eventually netted a trey, as a natural consequence of the incredible shooting rhythm he was enjoying). Actually, its not usual to see Yi putting the ball on the floor to create space between him and his defender, even if he can certainly use a fade-away move for this regard.

Despite his physical dominance compared to his Shangai counterparts, Yi barely played in the low post given the accuracy of his mid-range game, but still was pretty effective finishing his slashing moves and fast-breaks around the basket, delivering a couple of powerful dunks or a nice left-handed layup (it was almost a semi-hook). Dont ask him to make direction changes while driving, but Yi can decently attack his match-up with both hands. Also, he shows terrific coordination receiving the ball in transition, virtually backing the basket and, in a successive move, dribbling with his two hands while he turns around and attacks the basket, usually for a dunk.

1876
On defense, it was the same old story, as he made some questionable defensive rotations, and even wasnt always intense on his own match-up. He needs to learn to defend with his body, and not rely on his ability to intimidate.

In the second game, Yi was less prolific on the offensive end, also being better guarded even with double-team defenses, but with a strong scoring run in the last quarter, finally finding the rhythm with his jumper, and a high activity under the boards, he finished with 20 points, 15 rebounds, 2 assists, 4 steals and 3 blocks.

Playing at this level, and despite continually showing some flaws in his game, Yi will only keep solidifying his lottery chances for Junes draft, and emerges as the most likely first international pick in this edition.

Ricky Rubio, with yet another impressive performance in the Euroleague, becoming the key factor for DKV Joventut to beat the powerful Olympiacos and remain alive in the Euroleague Top-16. He had 5 points, 5 rebounds, 3 assists and 7 steals.

Sometimes, its hard to believe the immediate impact Rubio has on a game whenever he enters the court. But its true: suddenly strange things start to happen on the floor. This time was no different. With Joventut taking an early lead in the score, coach Reneses didnt play Ricky until a few minutes into the second quarter, right when the Greek team was completing the comeback. On the first play, veteran Greek PG Christos Harissis is ready to inbound the ball and Ricky is in front of him waiving his 6-9 wingspan for a five-second violation.

You dont usually see this kind of violation in a game, much less in the second quarter. And while its true that Ricky is an excellent and unorthodox defender, or that coach Reneses puts more emphasis on pressure defense whenever hes on court, there has to be something else, perhaps a psychological factor.

Anyway, it was particularly interesting to see that his shot appears to be making some strides. He still doesnt look completely natural, but his mechanics do seem a bit more fluid, his release quicker and his confidence bigger. He missed a couple of jumpers, but looked good in both; the first one was a catch-and-shoot jumper, grabbing the ball right in front his face and just igniting the release from there, without lowering it to take impulse or rhythm; the second one was a long three-pointer, near NBA range and again in catch-and-shoot fashion, and he did look very solid here, with a fluent and quick release, and the ball almost making it through the rim. Its a pattern lately, as he looks more confident and shoots when left open.

1877[c]Rubio aggressively guarding Scoonie Penn off the ball[/c]
Actually Ricky didnt score a single point until the last quarter, when he emerged to lead Joventut to the victory with his aggressive defense and by cashing in off fastbreak situations. Paired with James Scoonie Penn in that decisive period, he did a terrific job on him, particularly off the ball, denying passes to him and therefore hindering Olympiacos offense. Indeed he got a couple of steals in that period while Penns teammates tried to give him the ball, by coupling with a teammate in doubling the ball with a trap in the corner over Penn, or while Scoonie was in-bounding the ball. Also Ricky didnt suffer as much as expected in one-on-one situations against such a small and quick point guard. Penn finished the game with a season-high 8 turnovers.

Sun Yue delivered back-to-back triple doubles for Beijin Aoshen in consecutive wins over Maywood Buzz in the ABA League. With 20 points, 10 rebounds and 16 assists in the first, and 27 points, 11 rebounds and 10 assists in the second, this could mean a boost in his draft stock after disappointing in the Asian Games a couple of months ago. Particularly encouraging look his scoring figures, especially concerning his perimeter shooting (he went 6/12 both games combined), which has been one of his biggest flaws. Still he will likely have to convince NBA teams to pick him in a stronger setting than the ABA League.

Zoran Erceg continues with his great form for FMP. This weekend he had 24 points, 4 rebounds and 3 assists in the victory against Zadar, which pushes his team to shared leadership on top of the Adriatic League standings. Ercegs consistency is well reflected by the fact that he has scored in double digits in the last 9 games in the Balkan competition. Drafted or not, considering the selling policy of FMP, chances are Erceg will play for a wealthier team next season.

Vitor Faveranis immediate future is up in the air again. Last month he was on the verge of being cut, but instead there was a coach switch, seeing Chus Mateo (the guy who bet on him to fill one of the two non-EU spots in Cai Zaragoza) leave and be replaced by Curro Segura. Segura brought Faverani back to the rotation, and has been trying to motivate him in order to recover a very useful piece for his team, but with poor results so far.

Lets remember that the Brazilian played at great level in November and early December, making his signing then (on a loan from Unicaja Málaga) like a very successful bet. Simply, there arent many guys with his combination of post skills, size and athleticism in the Spanish second division, the Adecco LEB. But still this is a very competitive category, and the early accolades, all the NBA talk about him and Faveranis lazy attitude and lack of intensity came back to haunt him. With coach Segura commanding the boat in Zaragoza, there seemed to emerge a shade of hope, but it lasted just a few weeks. In the four games the Brazilian has played under his guidance, Vitor has averaged only 5 points and 4.2 rebounds in 15 minutes.

This weekend, Faverani didnt even travel with his team, instead staying in Zaragoza to, according to his team, follow a conditioning program to get in shape. Regardless of whether this is a smokescreen to hide a punishment for some disciplinary incident, or Faverani is actually out of shape after more than half a season played and no important injuries suffered, it does not look good at all.

The Russian market has stayed very active in February, to the point that various young prospects have switched teams these days. All moves involve CSKA Moscow, having Khimki as a trade partner in the most important one. In exchange for Venezuelan swingman Oscar Torres, CSKA has sent to Khimki the rights of Nikita Shabalkin and Vladimir Dyachok and the loan rights of guard Alexey Shved.

Shabalkin is currently playing in Samara on a loan and wont move to Khimki until the next season. Actually, its a bit of a surprise that CSKA apparently gives up on a talented and skilled power forward like him, who is enjoying a very solid campaign and should become a very nice player in the European scene. For Shved, it might be a good opportunity to start getting some burn at top competition. He had spent most of the season with CSKAs second team (CSKA Trinta) at the Division A of the High League, a sort of third division in Russia, where he averaged 19.2 points, 4 rebounds, 5.2 assists and 2 steals. Logically, CSKA retains his rights, as hes a kid with terrific potential for down the road. Still, he will have a hard time getting playing time in a loaded team as Khimki, having veterans Melvin Booker and Gianmarco Pozzeco ahead of him in the rotation.

Shved has been rumoured as a possible candidate for the Nike Hoop Summit World Team along with his countryman Artur Urazmanov, who precisely has come back from a loan in Samara to replace Shved at the point in CSKA Trinta. Also back to CSKA, indeed to play with him in that second squad is Urazmanovs old teammate Maxim Sheleketo, a physically gifted forward who tried to make Union Olimpijas roster early in the season and had remained inactive ever since.

We still have to mention sharp-shooter Vasily Zavoruev, another member of that terrific 1987 CSKA generation that, alongside Urazmanov and Sheleketo, also included lottery pick Yaroslav Korolev. Zavoruev, who was reportedly having troubles collecting his salary wages from his team Standart (where he was in a loan from CSKA Moscow), has moved to BC Kiev in Ukraine, signing a one-month contract, with an option to extend the deal to the remainder of the season. He has already scored 8 points in the last game played of the SuperLeague, a victory against Khimik.
Read Next...