Thoughts on the Euro Fever 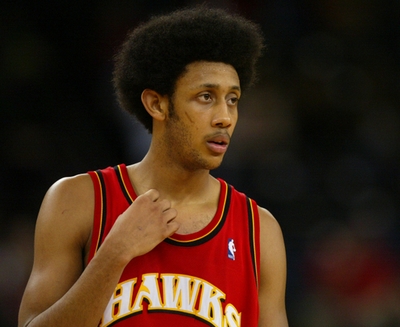 Luis Fernández
@DraftExpress
One of the hottest topics these days in the basketball world, NBA included, is how European teams are luring players away from the NBA with big money. Were not talking about any big stars, but still this offers a relatively new scenario, with the Old Continent emerging as a viable option for players who are still the object of desire for NBA teams.

Bostjan Nachbar and Carlos Delfino raised some eyebrows when they decided to leave the NBA and sign lucrative deals in Russia. Both were useful rotation guys in the NBA, and had decent offers to remain in the worlds top league, but regardless ended up signing for over mid-level exception equivalent money in Europe. Its not like these type of signings hadnt happened in the past productive internationals heading back to Europe (Dino Radja or Predrag Danilovic come to mind)- but they were extremely rare.

However, it was Josh Childress the one shocking the basketball world with his decision to join Olympiakos. Never had an up-and-coming young American player with NBA experience perhaps a potential future star- chosen European money over the American dollars. Its a new scenario unfolding right in front of our eyes. Picture it with the Nachbar and Delfino situation, and you have a real shake, probably small, perhaps isolated, but also capable of unfolding some consequences.

In the different analyses we read in the media these days on the issue, those three guys dont travel alone.

Mentioned with them are Jorge Garbajosa and Primoz Brezec, but they likely didnt have any decent NBA offers, obviously nothing comparable to what they will earn back in the Old Continent (especially Garbajosa, fishing in the Russian market).

Meanwhile, other penciled players such as Tiago Splitter and Juan Carlos Navarro cant be considered in the same boat, as they had dramatic buyout situations that virtually forced them to stay in Europe (the Brazilian) or come back (the Spaniard), unless they wanted to play almost for free in the NBA the following years. Those guys love the NBA, but even love has its limits.

Finally, Brandon Jennings is an entirely different category in his own, more related to the age limit than to any potential economic threat to the NBA coming from Europe.

Is this for real? Are we witnessing a new trend? Perhaps a worrisome scenario for the NBA?

The huge contracts those guys have signed are feasible only because, besides the strength of the Euro, some wealthy pockets are putting big money on the table. This is not any potentially profitable investment, theres no monetary return expected, perhaps only some political favors or under-the-table agreements. But its not a real business, like for example, the NBA is.

The biggest problem European basketball faces is its minimal ability to generate income and revenues. In a Continent dominated by soccer, basketball is a secondary sport played in second-tier leagues (talent wise). No big attendances, small TV ratings, ridiculously low merchandising, its really hard to make money off it. And teams really dont try to.

These Russian and Greek teams just recover a small fraction of what they spend, and honestly, that doesnt look like the foundation of any serious threat. Supported by billionaires, they completely depend on their money to keep that high standard of living. But right in the moment they decide to stop spending so much on basketball, its the end of the story.

Of course, these guys could still raise the bet, fuel in more cash, and start competing with the very top contracts in the NBA, the biggest fear some people feel overseas, but it would mean such a large amount of lost money that it seems highly unlikely.

Besides, were talking about a handful of teams. Only three Russian squads CSKA, Dynamo and Khimki- and the two Greek powerhouses Panathinaikos and Olympiakos- that enjoy the proper ownership to eventually pry a star away from the NBA. Thats five teams, and not a single one more (as long as other billionaires doesnt decide to join them- such as Triumph Moscow).

The NBA still has the upper hand for most European players, not to mention Americans.

Virtually every single guy that chooses a European offer over an NBA one is seeing a lot more money coming his way (the difference is often ridiculously big). At the same time, others are still giving up significant money to play in the NBA, such as Marc Gasol or Rudy Fernández have done this summer, or reject bigger money from Europe than they currently earn in the NBA, as both Anthony Parker and Luis Scola decided to.

The conclusion, players still want to play in the NBA, and overpaying seems like the only way to take them out. Some players, such as Matt Barnes, would rather take a minimum contract from a team like Phoenix than even consider a multi-million dollar deal from places like Russia.

Considering the amount of money being spent on these NBA guys, they dont really offer enough guarantees of stardom and dominance in the Old Continent. Rephrasing it, not only do they look overpaid by NBA standards, but also from a European point of view.

Both Delfino and Nachbar, although very talented, are inconsistent players even in the international scene, and its yet to be seen how Childress will adapt to a new basketball style, especially since he still doesnt enjoying a solid perimeter stroke.

It gets worse when you consider the signing policy of some of these teams, as they stockpile talented players with apparently not that much sense, gathering incredibly deep rosters that end up sadly misused. Olympiakos in particular, Childress new home, is building a solid reputation on this regard.

Meanwhile, its interesting to check how the richest team in Europe, CSKA Moscow, current Euroleague champion, only looks at the European market (with the sole exception of Viktor Khryapa, very valuable in Russia given his nationality and the required quota of national players for the domestic league), and only targets players they really need in order to build an incredibly strong core, not exhibiting the luxury of any unnecessary depth.

Theres good management and bad management out there, and those making the most noise arent necessarily included in the first group.

As you will have figured out by now, this is not any war between the NBA and the Euroleague. Indeed, its rather surprising the extremely low support that the Russian money is finding in the top European competition.

Since the ULEB took over European basketball (right at the beginning of this decade), the distribution of the Euroleague berths have remained stable, insensible to the changeable European environment. So its today that a mediocre French League still gets two teams into the Euroleague, or the extremely decimated Italian A1 gets four, while the increasingly rich Russian Superleague can only feature one squad (CSKA Moscow) on the premiere European stage.

Thats right, both Dynamo Moscow and Khimki, the new home for Nachbar, Delfino or Garbajosa, wont play in the Euroleague this upcoming season.

Reading into this situation, we can either think that the ULEB fails to adapt to new scenarios (perhaps given its composition and governing rules), or that they dont believe much in these expending adventures and prefer to support sustainable long-term policies.


Recently, the ULEB announced a new project for the Euroleague, to begin functioning in the 2009/10 season, that would result in 16 teams enjoying long-term licenses, in order to battle the uncertainty of the European basketball environment, and attract investors. At the same time, those teams would be required to maintain at least 10,000-seat arenas.

Given the requirements asked to land one of those long-term licenses, only CSKA will have one among Russian teams. Meanwhile, when a team like Khimki is showing up with only a 3,500-seat arena, you can imagine that its not the club model ULEB wants to promote.

This looks like an attempt to build professionalism and erase bad habits that too often resulted in bankruptcies and entire clubs disappearing. And signings like Childress might not be the best answer.

After several months of economic struggles, it became known these days that Akasvayu Girona wont be able to play in the ACB league this upcoming season because of excessive debts.

Its a pretty symbolic fact, since Girona used to be a small ACB club that in the summer of 2005 was blessed with a boatload of money from a real estate company, Akasvayu, that officiated as the sponsor of the team.

It was Akasvayu prying away Fran Vazquez from the NBA right after he was selected in the lottery by the Orlando Magic, signing him to a massive contract. They also threw enough money to convince Raul Lopez to come back to Europe after his NBA stint.

Fast forward three years, the real estate business is in a great crisis these days in Spain, the money is not flowing anymore, and Girona is out of the ACB.

Similar things could happen to other happy spenders whenever their rich owners stop pumping in money, as they cant live by themselves on those high standards.
Read Next...