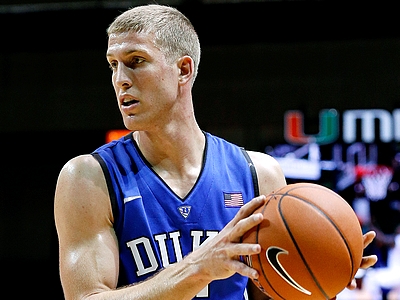 Derek Bodner
@DerekBodnerNBA
Duke senior Mason Plumlee is a NBA-caliber athlete who can run the floor, finish around the basket, score efficiently, and brings excellent size to the table. Where does that put him in this draft at age 23?

Returning to Duke for his senior season, Mason Plumlee had high expectations placed on his shoulders, both from an individual and team perspective. For the most part Plumlee has met those expectations, as he posted the best numbers of his career and helped the Blue Devils advance to the Elite Eight before falling to Louisville.

He saw his scoring average continue to increase, posting a career-best 19.0 points per 40 minutes pace adjusted, a nice increase over the 15.2 he posted his junior season while keeping his true shooting percentage and free throw rate up near the top of big men prospects in our database.

He sees a considerable amount of his offense in the post, a transformation that started during his junior season. According to Synergy Sports Technology, nearly 40% of his possessions now come from the post, where the 0.897 points per possession he generates is near the top 25th percentile in college basketball.

His increased effectiveness in the post has not come from a drastic change in his repertoire of post moves, as it's still relatively limited. His post game largely consists of hook shots over either shoulder, with an occasional drop-step mixed in. He has been doing a better job of establishing good post position and now does a fairly good job sealing off his defender and creating space.

He is showing increased awareness in the post, doing a better job of sensing both where his defender and where the double team is coming from, and doing a better job of either kicking it out and re-posting or attempting a counter move away from the help, but it's not yet at the point where you would consider it second nature for him. Plumlee will at times still look methodical in his counter moves, especially when his defender is able to dislodge him from his established post position and disrupt his move, something which happens with a bit too much regularity. Also, while he has improved his left hand on hook shots, he still tends to rely on his dominant right hand on all other finishes around the basket, at times leading to wasting his established position by finishing with his wrong hand.

Plumlee also gets a good portion of his offense off the ball, something that should carry over much more effectively to the next level. He is extremely quick getting up and down the court in transition and is overall very athletic for his size, with the ability to finish above the rim emphatically. He also moves well without the ball, has soft hands, and attacks the offensive glass. While his 3.0 offensive rebounds per 40 minutes pace adjusted is the lowest of his 4 year career, that is likely due to the fact that much more of Duke's half-court offense has been run through him than it has in years past.

Another area where Plumlee's athleticism could shine is diving to the basket off pick and roll sets. The fact that he's not a threat to make jump-shots hampers him somewhat in this regard, and his ball handling is only average  you wouldn't want doing more than one or two power dribbles in traffic  but he has the size, athleticism, and touch to develop this part of his game as his perimeter skills develop.

One area that Plumlee hasn't made all that much improvement in is his perimeter shooting. According to Synergy Sports Technology, Plumlee attempted only 10 jump shots on the season. He did improve his free throw percentage quite a bit, from 52.8% his junior season to 68.1%, with 4.8 makes per game. While that is a good sign, he still has a hitch in his release and has yet to really show that in game situations. His jumper will likely be something teams will want to study more closely during his pre-draft workouts to gauge if he has more potential here than he's shown.

On the defensive side of the ball, Plumlee has the size and willingness to be an effective post defender, as he has in years past. He has continued to fill out his frame, as it appears he has added both lower and upper body strength, and has done a better job of holding position down low. He's also a very good defensive rebounder, with his 8.0 defensive rebounds per 40 minutes pace adjusted ranking second among centers expected to be drafted in the first round, trailing only Nerlens Noel. He does a good job boxing out and fighting for position early, and does a good job tracking the ball.

While he's overall a good athlete, his lateral quickness is average at best. He tends to give quite a bit of room to ball handlers on the pick and roll, as he struggles to get back to his man if he doesn't. In the NBA, with improved pick and roll play and the big men he'll be asked to defend, this is going to be a concern. Duke was attacked mercilessly at times on the pick and roll this season, and Plumlee was a major target of opposing coaches due to his inability to step outside of the paint. He's also not a prolific shot blocker, so it remains to be seen how effective of a rim protector he will be inside the paint.

Mason Plumlee is a name decision makers will be readily familiar with come June, with clearly defined strengths that should be able to provide help to a team next year. Near 7-footers with NBA caliber frames and terrific running and leaping ability aren't easy to come by, so it's not difficult to see him fitting into a NBA rotation, even if his long-term upside is somewhat limited. If he can show that his improvement in the post will translate to the next level and show signs that he can develop his jump shot into a usable weapon, it's possible that he can convince someone that he still has room for growth despite the fact that he is already 23 years old.

When it's all said and done, Mason Plumlee clearly has the physical tools and talent needed to play in the NBA. The biggest question might be whether he is physically and mentally tough enough to make his presence felt on a nightly basis against other elite-level athletes inside the paint.
Read Next...