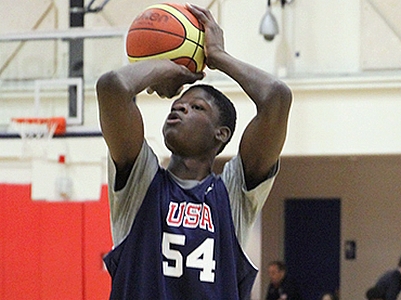 Strengths
-Has impressive physical attributes. Measured between 6'10 and 6'11 with shoes in different settings, with a 7'4 wingspan. Has a strong, well-proportioned 254 pound frame
-Mobile player
-Has very good scoring instincts. Can score with either hand in the post using decent footwork and soft touch
-Has good hands and is a solid finisher off two feet.
-Has a nice looking stroke from mid-range. Should be able to develop this part of his game in time
-Shows very nice potential defensively. Stepped out on the pick and roll and moved his feet impressively. Can block shots using his very long arms

Outlook: Very talented big man who is highly productive on both ends of the floor. Considered by most to be the #1 or #2 center in his class. Had a strong mini-camp in Colorado Springs, likely cementing an invite to the Nike Hoop Summit.

Strengths
-Nice frame with a huge, 7' 4.5 wingspan. Massive hands.
-Good athlete who can really run the floor. One of the first players down the court on most possessions. Above average leaper.
-Uses his mobility, hands and leaping ability to finish out of pick and roll. Nice touch around the rim. Moves intelligently off the ball
-Soft touch on his right-handed jump hook
-Shows flashes of an impressive motor. Very good offensive rebounder. Able to rebound well in traffic thanks to his length.
-Displays good timing as a shot blocker. Fairly quick off the floor. Long and rangy. Able to cover ground quickly. Can defend in face-up situations a little bit.
-Very intelligent young man off the court. Plays within a role for the most part, although he will break off and shoot a contested jumper every once in a while

Weaknesses
-Frame still has room to fill out. Struggles at times versus overly physical bigs.
-Makes up for it in length but he's a bit short for a center at 6'9 or possibly 6'10
-Not much of an offensive threat outside of the paint. Gets rotation on his jumper but overall shooting mechanics aren't great.
-A bit slow getting to his jump hook. Footwork still a work in progress. Not very fast-twitch. Nice touch but mostly limited to his right-handed jump hook on the block.
-Decent decision maker overall but will go through stretches where he takes contested jumpers early in the offense
-Will bite on fakes from time to time on the defensive end
-Doesn't show much negative or positive emotion on the court. Looks a bit apathetic at times

Outlook: Allen put together a very impressive camp by excelling in areas that college coaches are looking for out of their five man. The Austin, Texas native ran the floor hard, finished around the rim, crashed the glass on both ends of the floor, and protected the rim with regularity. Allen can impact the game in several ways without being a focal point in the offense, which should earn him heavy minutes early on at the NCAA level. Allen isn't overly polished on the offensive end, but he will certainly be on the NBA radar screen given his frame, impressive length, mobility and touch around the rim. Allen is without a doubt worth following to see how his frame fills out and how his offensive game develops.

Strengths
-6' 9' with a 7' 2 wingspan
-Can really offensive rebound. Uses his strength and mobility to overpower opponents or beat them to the spot.
-Fairly light on his feet despite being 287 pounds
-Impressive touch on his jumper for a player that size. Can stretch it out to three. Comfortable facing up, jab stepping and stroking mid-range jumpers.
-Soft hands
-Nice touch out of the post.
-Doesn't shy away from contact at all
-Very good basketball instincts

Weaknesses
-Way overweight at 287 pounds. Coming off of an injury, which may have contributed to the high weight (was only 269 pounds at the Nike Academy)
-Struggles with pace of play. Gets tired easily.
-Has issues finishing over length. Surprisingly fleet of foot but still isn't an explosive leaper, especially from a standstill.
-Doesn't get great extension on his jump hook
-Better offensive rebounder than defensive rebounder at this stage
-Motor runs hot and cold, in large due to his conditioning
-Lateral quickness is average. Is he quick enough to guard power forwards?

Outlook: Spellman has an impressive skill set for a player at his size, showing an ability to make shots consistently with range and crash the offensive glass aggressively. He has nice overall basketball instincts and most definitely doesn't shy away from contact on either end of the floor. The biggest question for Spellman, however, revolves around his weight. He's very skilled for his size and has good length for his position, but Spellman will most likely always be limited by his weight if he continues to play up in the 280-pound range. Assuming Spellman is able to get back to the high 260s like he was at Nike Academy, he's certainly poised to turn in a very impressive career at Villanova as a skilled big who can mix it up on the interior and also step outside at times as well. From an NBA standpoint, he will have to find a position he can guard before he can be seriously considered, which will likely come down to how his conditioning evolves.
Mohamed Bamba, 6-11, Center, New York, Class of 2017

Outlook: Extremely raw, but had arguably the highest upside of any player in attendance. Really struggled the first day, but came back strong and showed some very impressive things in the second and last day of the Camp. Will draw some inevitable comparisons to Rudy Gobert.
Read Next...