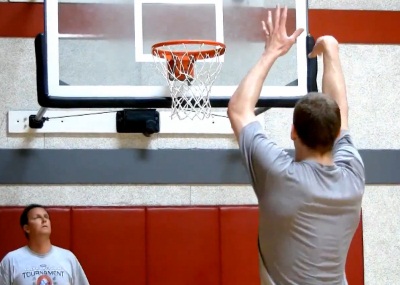 Richard Walker
@DraftExpress
Once again we've made out way to Los Angeles to check in some of the top prospects in the 2011 draft class as they prepare for their upcoming workouts.

We start our coverage this year at the 360 Sports Performance Center, where we got a chance to watch a brief workout featuring Priority Sports Clients Jon Leuer and Chandler Parsons, who spent a few weeks here preparing for the draft with former NBA player and UCLA star Don MacLean. Leuer and Parsons were joined by J.R. Giddens, who ended the season with the New Mexico Thunderbirds, and David Lee who is already itching to get back off the floor while most NBA veterans are still on vacation.

The workout, which was separated into two sections of offensive skill development and competitive play, started with the players working on their spot-up shooting ability before working on some specific moves in pin-post and midrange games. When the sessions transitioned into a game of 2-on-2, it was heavily geared towards implementing and refining the things MacLean had the players working on early in the day.

One of the most polished big men in this year's draft, Jon Leuer was a later bloomer on the high school level, but was amongst the most productive players in the NCAA this season. Averaging over 25 points per-40 minutes pace adjusted as a senior, Leuer consistently improved his game each year he spent with the Badgers and earned First Team All-Big Ten honors to cap off an impressive senior campaign.

Here at the 360 Sports Performance Center, Leuer finds himself in an extremely unique position to develop his skill set, since his trainer, Don MacLean, found considerable success on the NBA level playing the role Leuer will likely find himself in. He's also benefitting from the presence of David Lee, who was constantly giving both draft prospects here feedback, making it clear what works in the NBA and what does not.

The first order of business for Leuer in this workout was to prepare to shoot the NBA three. Given the role he'll play at the next level, his ability to space the floor out to 24-feet is especially important, and MacLean had all of the players here attempting shots from distance with their feet set. Leuer's shooting from beyond the arc tapered off a bit late in the season as we noted the last time we wrote about him, thanks in large part to teams doing a better job closing him out.

Despite their efforts, Leuer still finished the season shooting a solid 37% in catch and shoot situations. His footwork and release are extremely sound and consistent, and while his mechanics aren't as fluid as some of the players we've seen in his mold, the results we saw here from beyond the NBA line looked promising.

As the training session went on, we got to see Leuer open up his game a bit, working on his pull-up jump shot and matching up against David Lee in the two-on-two session.

MacLean had Leuer working extensively from the elbows and pinch post, both in drills and during competitive play, two things he'll do regularly in private workouts with teams in the coming weeks. Leuer's footwork was a big factor when he was looking to score inside the arc, and he appeared comfortable knocking down midrange shots off the bounce, but MacLean and Lee looked to drill home a few details to help him maximize that part of his game.

Leuer showed that he can consistently score both facing the basket and with his back to the basket at Wisconsin, but in the single session we watched, it was interesting to see pieces of his game dissected and how the minor changes he made added to what he does. Tending to hold the ball for too long and look at the floor and jab if he can't get a shot off as soon as he turns to face from the midrange, Leuer had some initial struggles scoring off the bounce against Lee, but he more than held his own after MacLean and Lee pointed out the changes he needed to make. Once he did a better job turning to face, keeping his eyes on the rim, looking for contact on the up and under, and not telegraphing his moves, he looked extremely crisp.

Though Leuer struggled at times with the stronger and more explosive Lee down low--like many NBA power forwards did last season--he competed admirably on the defensive end, and had some stretches of brilliance offensively that even had Lee impressed.

As much a coach as a participant since he was coming off a long season and short vacation, it was refreshing to see Lee pushing Leuer to work on his weaknesses, and his presence is only going to work in the Wisconsin product's favor as he competes against his peers in the draft in private workouts.

One of the top clear-cut role-players at the power forward position in this draft, it was hard not to come away impressed with Leuer. He's going to benefit immensely from incorporating MacLean's instruction into his game long term, and if he can continue to make strides in the strength and conditioning department, his time at the 360 Sports Performance Center will have been well spent.

The Player of the Year in the SEC this season, Chandler Parsons is one of the more accomplished prospects in the senior class. Standing nearly 6'10, Parsons has excellent size for a small forward, and while he didn't light the world on fire statistically as a senior, he is extremely skilled and versatile.

Here at the 360 Sports Performance Center, Parsons has been honing his ability to score from the perimeter under the instruction of Don MacLean, and getting a crash course in defending smaller players at the next level by regularly matching up against the ultra-athletic J.R. Giddens. Getting pointers from fellow Gator David Lee, Parsons has continued to foster his jack-of-all-trades skill set since the end of the college season.

Similar to Leuer, Parsons started the session we watched by getting up some catch and shoot threes from behind the NBA line. Fresh off the best shooting season of career, Parsons looked comfortable from NBA range. His shot is extremely smooth, just like the rest of his skill set, and he got better and better from the outside as the workout progressed.

As the training session went on, we got to see Parsons show some of the other facets of his game matching up against a staunch defender in J.R. Giddens in two-on-two competition. Putting the ball on the floor to get to the rim, Parsons was able to turn the corner on a few occasions, and did a good job defending the quicker Giddens throughout the five game series they played.

Much of what makes Parsons an intriguing prospect stems from his ability to pass the ball, crash the glass, and distort the defense with his handle. We've grown accustomed to seeing all those things from Parsons over his four year stint at Florida, so seeing him have to create one-on-one against Giddens and be a scorer first was interesting to watch. He's not going to be asked to force the issue to score on the NBA level like he was here, so it was intriguing to see him out of his element, having to make decisive moves and get his shot off under duress.

A terrific fit next to the high scoring guards NBA teams love to bring off the bench, Parsons is working to become a more potent shooter and scorer to complement all of the things that he already does well. He's been especially focused on his conditioning in recent weeks, but from what we saw, is benefitting from the on court instruction as well.
Read Next...