Word on the Street: Love to Minnesota? 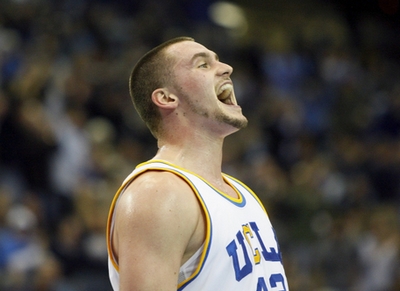 Numerous sources with varying ties to Minnesota confirmed to DraftExpress over the past few days that Timberwolves GM Kevin McHale has locked in on UCLA freshman Kevin Love as possibly his favorite prospect in this draft. McHale reportedly likes the skill-level and all-around feel for the game that Love brings to the table, as well as his winning mentality, and sees him as an excellent potential compliment to Al Jefferson in Minnesotas front-court.

Picking 3rd in this draft, many would consider it a reach to take Love, although numerous advanced statistical formulas have identified him as being the 2nd most productive player in this draft, behind Michael Beasley.

There is already some talk that Minnesota will look to make a trade with Memphis GM Chris Wallace, who would then have the option of fortifying his front-court by drafting Brook Lopez at #3, or swinging for the fences and taking O.J. Mayo. Memphis could offer Minnesota the young prospect of their choice in Kyle Lowry, Hakim Warrick or Javaris Crittenton to help facilitate the deal. Wallace only has two more years left on his contract and needs to make as big a splash as possible in this draft to jump-start Memphis rebuilding process, meaning he could be leaning more towards taking Mayo, especially if his team is drafting 5th.

Seattle Locking into Bayless at #4?

Although Sam Presti has to be considered one of the best GMs in the league in terms of holding his cards as close to the vest as possible, early indications are that the Supersonics are heavily targeting Arizona freshman point guard Jerryd Bayless, barring poor workouts or background checks. Reports weve gotten indicate that Bayless will measure out extremely well as far as his intangibles are concerned, as hes a highly motivated and engaging person who comes from a strong background.
Bayless fits the up-tempo early-offense system that P.J. Carlesimo has implemented in Seattle, and can play minutes alongside their existing point guard rotation of Earl Watson and Luke Ridnour until hes ready to man the position full-time. Seattle had the 4th fastest paced offense in the NBA last year, but finished dead last in points per possession and near the bottom in true shooting percentage. A big time athlete and shooter like Bayless could help in that regard.

NBA teams we spoke with indicated that their intel suggests that Presti is also high on Indiana shooting guard Eric Gordon, although he might be a bit of a reach with the 4th overall pick.

Is 7th a Reach for Augustin?

In desperate need of help at the point guard position, and with D.J. Augustin in their sights holding the 7th overall pick, the Clippers are pondering whether to pull the trigger on the extremely productive sophomore playmaker from Texas. Augustin will clearly be the best point guard on the board, but may be a bit of a reach where they are selecting. Workouts will play a big role in the decision of Elgin Baylor and key decision maker Mike Dunleavy Sr. They will also likely nab a big man with the 35th pick.

Adding interest is the fact that Augustin has reportedly decided to hire Thad Foucher of Los Angeles-based agency Wasserman Media Group as his representation. Foucher is from Augustins home-town of New Orleans, and the agency has strong ties to the Texas program, currently representing LaMarcus Aldridge. If Augustin is selected in the top 10, WMG could have 5 of the top 10 picks in the draft, as they also represent Derek Rose, Brook Lopez, Danilo Gallinari and Anthony Randolph. There are rumors that they may end up signing Russell Westbrook as well.

Augustin has numerous fans in the lottery, including Charlotte and especially Indiana, and likely doesnt slip past Sacramento at #12 at worst. He is one of the 9 players who will be participating in the very exclusive NBA pre-draft camp media session, which is a very good sign for him.

D.J. White may a promise from the Detroit Pistons at the end of the first round, according to sources with ties to the player. The Pistons have the 29th overall pick and may like the way Whites length and toughness fit into their teams overall culture. They have not been shy in the past about identifying players they like early on and being aggressive pursuing themhaving made a promise to draft Rodney Stuckey with the 15th overall pick right around this time last year, and reportedly also giving DeVon Hardin assurances they would select him in the late first round before he decided to return to school. They did the same exact thing with Jason Maxiell a few years back, which caused him to pull out of the NBA pre-draft camp after just one day, despite then being projected as a 2nd round pick.

White has scheduled many workouts with NBA teams for the weeks leading up to draft, which is not unusual even for players like Stuckey or Maxiell if years past is any indication. He will not be playing in the NBA pre-draft camp, which is a pretty good sign that he feels comfortable with where he is projected to be drafted.

Will Omer Asik be the steal of the 2nd round?

We had the chance to go over quite a bit of film, advanced statistics and previous scouting reports over the past few days in advance of a large quantity of NBA draft content well be providing Yahoo! Sports once again this year. While doing so, one player really stood out as someone we (the DX crew in America, not Europe) may have previously been overlookingTurkish big man Omer Asik. You may have read some of his scouting reports on this site already, as Luis Fernandez has gone into quite a bit of depth on him recently.

Asik has very good size, a frame that looks capable of adding more weight over the next few years, and a phenomenal wingspan that helped him break the Euroleague Top 16 round shot-blocking record. Asik is an extremely late bloomer who barely could minutes on the basketball court two years ago, but has quickly developed into one of the top big man prospects in all of Europe this season. He started the season on loan with Alpella, and averaged 15 points, 11 rebounds and 2.2 blocks in 34 minutes per game over the first 10 games of the season. After exploding for a 25 point, 16 rebound, 6 assist outing against European powerhouse Efes Pilsen, Asik was brought back to the team that owns his rights, Fenerbahce, and was quickly added to their roster for the Euroleague.

On a per-40 minute basis, Asiks numbers are spectacularaveraging 16.8 points, 11.5 rebounds, and 4.5 blocks, while shooting just under 60% from the field. He ranks 5th in Win Score and 16th in PER, behind some of the most established players in European basketball.

This is coming remind you from a fairly skinny player who is extremely raw offensively and is only playing essentially his second season of professional basketball, meaning his learning curve is still very steep. He put up those numbers against a level of competition that is far stronger than anything any NCAA player faced this season, against the cream of the crop of Europe in the second round of the Euroleague. There is a very good chance that once his body develops, and his skill-level becomes more polished, we could have a very intriguing player on our hands, in the mold of an Andris Biedrins. He doesnt turn 22 until July.

Were talking about a pretty athletic big man, with good hands, solid touch, and great extension around the basket thanks to his length. He is a good defender, mobile enough to defend on the perimeter and physical enough to defend down low, thanks to the high amount of energy he brings on both ends of the floor. His rebounding numbers with Alpella or per-minute with Fenerbahce dont lie.

On the downside, Asik is still fairly raw on the offensive end, possessing very little in terms of perimeter shooting ability or scoring moves in the pivot, and no left hand to speak of. He struggles at the free throw line, shooting just 52% in the Euroleague. He is certainly not a player that can be relied upon to get points, and also struggles when pressured with the ball in his hands. While his frame is solid and should develop in time, he still needs to add plenty of strength to play in the NBA. He currently struggles at times finishing with contact due to his underdeveloped body.

With two more years left on his contract, and no NBA out clause, it will be a while before the team that drafts him sees dividend from the pick, which could be viewed as a positive by some. His team is currently playing in the finals of the Turkish league playoffs, and he wont be able to come over for private workouts until probably the middle of June, which eliminates the possibly of getting a physical at the Orlando pre-draft camp or playing at the Reebok Eurocamp in Treviso.

Weve moved Asik all the way up to the top of the 2nd round, and will be curious to hear what teams think of him once he comes over for private workouts. While there are certainly no guarantees that he will develop, adjust culturally or even make it over to the NBA, there is very little downside to drafting a long, athletic and productive 7-footer with a big upside in the second round. We could easily see a team with multiple picks, such as Seattle, Minnesota or Portland targeting him, as all have very competent international scouting operations as well.
Read Next...