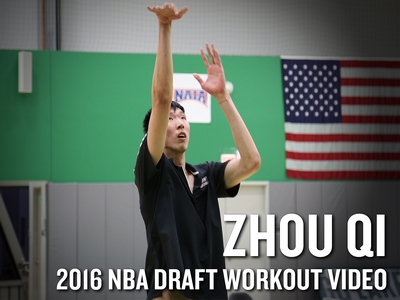 Matt McGann
@McGannMan11
We joined Zhou Qi, 7'2 big man from China, as he worked out in Chicago and Dallas in preparation for the 2016 NBA Draft.

DraftExpress was present at two workouts for Zhou Qi recently in Chicago and Dallas, just days before he is expected to return to China to join the senior national team in their preparation for the Rio Olympics this summer.


Measuring over 7-foot-2 in shoes with a 7-7 ¾ wingspan that ranks among the longest ever seen at an NBA combine or predraft setting, Zhou has the interest of franchises selecting in the mid- to late first round because of his mobility, soft shooting touch and rim-protection ability.

Zhou, DraftExpress' No. 26 prospect, led the Chinese Basketball Association in blocks per game and per minute this year, comfortably edging out former NBA players Samuel Dalembert, Greg Oden, Dominic McGuire and Jerome Jordan with 3.2 blocks in 34 minutes per game. He also added 15.8 points and 9.8 rebounds, shooting 60 percent from the field and 76 percent from the free-throw line. His ability to stretch defenses beyond the three-point line, while providing a shot-blocking presence in the paint, is coveted in today's NBA.

He has been working out in the States for the past two months in Dallas and Phoenix, and is currently traveling to different cities to work out for NBA teams privately before heading back to China on May 26. Zhou worked out in Boston and Memphis after the NBA combine, and has two more visits scheduled with teams on the West Coast before departing.

Zhou's representatives expect to reach an agreement with the Chinese Basketball Federation to allow him to join the NBA in the near future, which should boost his draft stock. The plan is for him to work with an English tutor in China, work out and focus on his nutrition to help him prepare him for the rigors of the NBA. He has a significant following in China and is considered the best prospect to emerge in the country in some time.