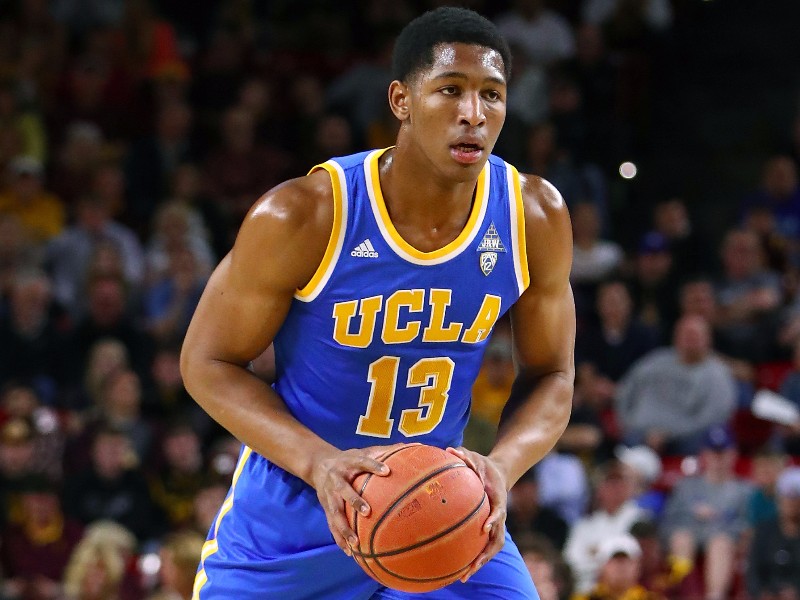 Ike Anigbogu was slightly overshadowed by fellow freshmen Lonzo Ball and T.J. Leaf when talking about UCLA's drastic turnaround this season, struggling with minor injuries throughout the year, and averaging a modest 4.7 points, 4.0 rebounds, and 1.2 blocks in 13 minutes off the bench for the Bruins. Nevertheless, Anigbogu provided a dynamic that Steve Alford and the Bruins were lacking, despite being one of the youngest players in all of college basketball, and played a role that is highly sought after for big men in today's NBA,

The intrigue with Anigbogu starts with his excellent frame, standing 6'10" with long arms, an excellent standing reach, and a strong lower body. He's also quick on his feet, fast off the ground, changes direction well, has a very quick second jump, and brings a consistently high energy level, providing him with many of the attributes that NBA teams look for in the modern NBA big man. Those physical tools provide Anigbogu with a strong starting point, allowing him to make an impact even as his overall skill level catches up.

Anigbogu contributes in a number of ways offensively, despite a perimeter game which is very much in its beginning stages. Perhaps his most consistent contribution is on the offensive glass, where he pulled down an impressive 4.1 offensive rebounds per 40 minutes, pace adjusted, a number which ranks fourth best among DX Top-100 prospects.

Anigbogu is constantly active in pursuing offensive rebounds, and can be an explosive athlete in space, making it imperative that teams seek him out when a shot goes up. He also has the size (250 lbs) and lower body strength to push opponents out of the way, and this combination of different ways he can beat you make him a constant threat on the offensive glass.

In terms of converting those extra possessions into points, Anigbogu has some distinct strengths and weaknesses. He has a quick second jump, and the physicality to absorb contact, both of which help him in this regard. His overall touch around the rim can be erratic, though, he's not nearly as explosive of a leaper in traffic, and doesn't have the awareness to consistently know when to kick the ball out and reset the possession, often forcing tough shots with little to no chance of converting. Overall, he shot just 48% on field goal attempts after offensive rebounds, per Synergy Sports Technology.

This dynamic strong leaper in space, quick off the ground, seeks out contact, struggles with touch, not incredibly explosive in traffic impacts other areas of his game as well. Anigbogu moves well off the ball, especially with his mobility and ability to explode in space, and can attract attention from defenses because of that, thus creating space for his teammates. When contested by an equal athlete, however, his lack of touch becomes an issue, and it will be interesting to see how that develops down the line, especially considering the jump in interior talent he'll be facing in the NBA. He also struggles to catch passes thrown below his chest, being a lot more reliable when catching balls passed to him above his shoulders.

Anigbogu's other main strength offensively is in transition, where he has a strong first few steps in transition and long strides once he gets up to full speed, allowing him to beat his man down the court with regularity. He's also an active rim runner who takes few possessions off, and this is likely to be an area where he can help teams early on at the next level.

In terms of skill level, Anigbogu still has much work to do. He attempted just eight jump shots on the season, per Synergy Sports, and looked very mechanical when doing so. There isn't a whole lot of fluidity in his jump shot, and his 53.5% shooting from the free-throw line suggests a patient approach to improving this aspect of his game is likely necessary.

Anigbogu is similarly unrefined in the post. Despite his size and strength advantage, he shot just 30.4% on post-up opportunities, despite using a sizable portion of his half-court offense on the block. His lack of touch comes into play here, but his underdeveloped and mechanical footwork is a big factor in his ineffectiveness as well. Limited to simple jump hooks and turnarounds, Anigbogu can become predictable, and his awareness and recognition leave something to be desired as well. He becomes very turnover prone when doubled in the post, turning the ball over on nearly 18% of his post-up possessions, per Synergy Sports, which is nearly as frequently as he scores (25% of the time).

Defensively is where Anigbogu looks to make the biggest impact, and where his long-term potential is the most obvious. He averaged 3.5 blocks per 40 minutes, pace adjusted, which once again ranks as one of the best numbers in our top 100 rankings. His length comes into play here, as does his ability to cover ground quickly, and he shows good timing as he actively seeks out opportunities to alter shots.

One of the problems he faces, however, is he's a little too active in seeking out opportunities to alter shots. Anigbogu has a tendency to find himself out of position as he chases shots he has little to no chance of getting to, leaving his teammates in a bind as they have to cover for his over-aggressiveness. While his constant motor and activity level are something to be applauded, his overall recognition, awareness, and communication defensively is something he'll have to continue to develop down the line in order to make the most of his impressive physical gifts. His 7.6 fouls for per 40 minutes, pace adjusted, a number which is far and away the worst among top-100 prospects in our database, shows some of the development needed in this regard.

Another area where Anigbogu can impact the game defensively is in the pick and roll, a key for a big man in today's NBA. He does a good job of zoning a pick and roll, dropping back to cut off a driving lane while having the quickness and length to recover and challenge a perimeter shot. He's a little bit inconsistent in this regard, especially in his stance, but the potential is clearly there. Anigbogu is also a strong post defender, with the size and strength to hold his position and the length to contest shots.

One area where you'd like to see improvement from Anigbogu is on the defensive glass, as he hauled in just 19.9% of the available defensive rebounds while he was on the court. His activity as a shot blocker hinders him somewhat in this regard, but his overall awareness leaves something to be desired in this respect as well. He's capable of rebounding out of his area thanks to his quickness and strength, but he needs to do a better job of being in position when the shot goes up.

Ike Anigbogu is an interesting case, with well defined strengths and weaknesses. The good news for Anigbogu and his draft stock is the things that he's good at altering shots at the rim, running in transition, cutting off the ball, being a lob threat at the rim is a role that's become increasingly valued at his position. His awareness and recognition needs to continue to develop, as does his overall skill level, but given his physical gifts, effort level, and youth (he won't turn 19 until next October), there's going to be plenty of demand for his services come June 22nd.
Read Next...