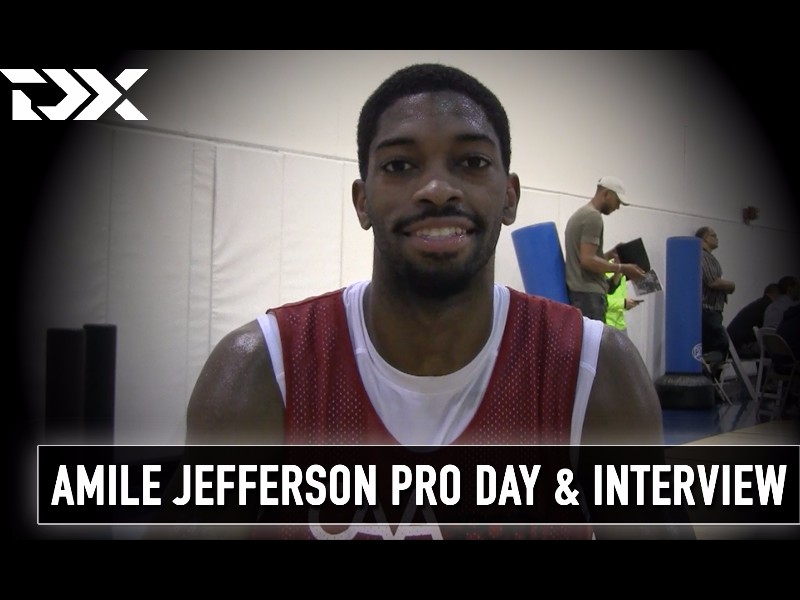 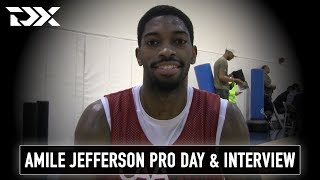 Matt McGann
@McGannMan11
Footage from the Amile Jefferson CAA Sports Pro Day Workout in Los Angeles, which was attended by over 150 NBA scouts.

One of the higher ranked players at this event, Amile Jefferson (#20 Scout, #36 Rivals, #24 ESPN) didn't have a very impressive performance, struggling to consistently score against a very well coached team in St. Mark's.

Measured at 6'9 at the Kevin Durant Nike Skills Academy with a 7-foot wingspan and a skinny 197 pound frame that looks limited in the amount of weight it can add in the short term, Jefferson is a very good athlete with a still developing skill set, while also being somewhat stuck between positions at this stage.

On the offensive end, Jefferson appears most comfortable operating in the mid to high post range at this stage, where he can take advantage of a hybrid face-up/post-up game. Jefferson's ball-handling on face-up drives is fairly raw, but he's a bit farther along with his post moves, showing decent command of drop-steps and hook shots. Jefferson finishes well with touch around the basket, showing a nice array of running hooks and floaters to get the job done, but not showing much ability to score with power in the half court setting.

On the perimeter, Jefferson's dribble-drive game is pretty raw, not showing the ability to consistently get past his man and showing little beyond basic straight line drives when he does. He didn't exhibit much in terms of a perimeter jumper in his game here, and hasn't in the previous two times we've written about him either.

Defensively, Jefferson was mostly a non-factor, having to play the center position frequently on his team and struggling to match up with the much bigger and stronger Kaleb Tarczewski. He was very much a non-factor in help defense as well, not being much of a shot-blocking threat on the weakside. Projecting forward, he's probably most suited to defend either 3's or 4's, but it's not entirely clear which way he'll go, as there are questions about his ability to guard both.

Looking forward, Jefferson still is a raw prospect with some intriguing tools, but has a lot of work to do in developing his skill-level and overall feel for the game. What position he's best suited to play both offensively and defensively is yet to be seen, but developing consistent ways to contribute offensively should be his highest priority at the moment.
Read full article

A very highly regarded prospect according to the recruiting services, Amile Jefferson's (#20 Scout, #36 Rivals, #24 ESPN) reputation stems mostly from his excellent potential at this point, rather than his current production.

A long, rangy forward somewhat stuck between positions at this point, Jefferson is a very good athlete who works hard on the court and is able to make his presence felt thanks to his excellent physical tools.

Not an overly skilled player, Jefferson finds ways to score in transition and on the offensive glass, where his length and explosiveness shine through. In the half-court, he's limited mostly to straight line drives with his right hand, struggling to change directions with the ball or use his off hand. His jump shot has a long ways to go in particular, both with his feet set and off the dribble, as he does not elevate very smoothly off the ground for pull-ups.

Defensively, Jefferson puts a very good effort in and is capable of making his presence felt on the glass, in the passing lanes and as a shot-blocker thanks to good timing and the energy-level he displays. He has the versatility to guard multiple positions, which will help him as he inevitably make the transition to playing on the perimeter moresomething he'll almost certainly have to do considering his size and lanky frame.

Those around him say very good things about his work ethic and character, which is obviously a major plus at his age.
Read full article

Jonathan Givony
@DraftExpress
Amile Jefferson is one of the most highly regarded members of the 2012 high school class. He showed some intriguing characteristics in Chicago. A long, skinny 6-foot-7 forward who is clearly stuck in between positions right now, Jefferson is a good athlete who does a little bit of everything and definitely seems to have the intangibles you look for in a young developing prospect. He is fairly smart and unselfish offensively. He's also very competitive and puts a good effort in on the defensive end. He struggles to make shots from the perimeter, showing very poor mechanics; but he manages to produce offensively thanks to his ability to get to the rim with a quick first step and big, long strides. He has an affinity for mixing things up in the post. Jefferson's game is a bit on the awkward side at the moment  nothing that he does looks particularly smooth  but he's effective at this level. He grows on you the more you watch him.
Read full article