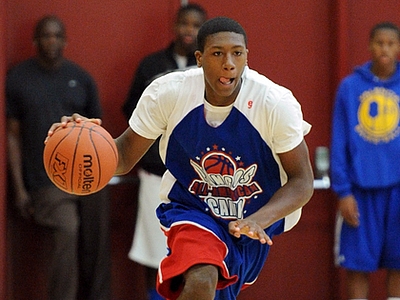 One of the more physically gifted players in the 2012 class, Kris Dunn (#26 Scout, #10 Rivals, #29 ESPN) is a long and extremely athletic point guard with a good frame and great size for his position.

He excels in transition and beating opponents off the dribble at this level, showing a quick first step and nice ball-handling skills, and looking fairly unselfish finding the open man in drive and dish situations. Dunn's perimeter shooting skills and decision making ability are still catching up with his physical tools, as he can be a bit wild or turnover prone at times and doesn't have very much range on his jumper at the moment. Defensively, he has terrific upside with his size, length and quickness, something that will surely be harnessed by the coaching staff at Providence once he arrives on campus.

An old school, no-frills type big man that any college coach would love adding to their frontcourt rotation, it's not difficult to see on first glance what the recruiting services like about Cameron Ridley (#6 Scout, #21 Rivals, #8 ESPN). Standing a legit 6-10, with extremely long arms, big hands and an NBA caliber frame, Ridley is a true load inside the paint, and doesn't have any misconceptions about the type of player he is.

Not terribly quick or explosive, Ridley is comfortable making a living inside the paint, where his big frame, soft hands, nice touch, strong fundamentals and solid toughness allow him to make a significant impact at this level.

Ridley isn't the most skilled or technical player at this stage, but he's capable of scoring in a couple of different ways, be it with some basic post moves, a 15-foot mid-range shot, or a turnaround jumper he gets off with a very high release point. He grabs offensive rebounds with terrific timing, positioning and soft hands, not being afraid to put a body on an opponent and move him around with superior strength. Despite his lack of overwhelming athleticism, Ridley is able to get the job done inside the paint due to his basic skill-set, energy level and sheer length, which makes him a pretty rare commodity at the collegiate level.

Defensively, Ridley uses his body well inside the paint and shows nice timing as a shot-blocker, something that may not necessarily translate to higher level competition due to his below the rim style of play. When forced to step outside the paint, he struggles badly, as his lack of lateral quickness makes it very difficult for him to move his feet adequately, which makes it hard to see him playing any other position except center in the long-term.

In the short-term, it's easy to see why Ridley is such a sought after collegiate prospect. However, he's going to have to prove that his average athleticism will not hinder him from making an impact at the NBA level, something we'll reassess after he suits up at Texas. 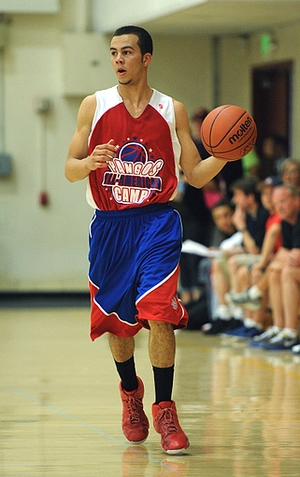 A player who made a very strong impression from what we saw at the adidas Nations, Gabe York (#42 Scout, #31 Rivals, #36 ESPN) is the type of Stephen Curry-esqe combo guard that has become very popular in professional basketball as of late.

A bit undersized at around 6-1, and without great length, York doesn't look like much on first glance, but is a surprisingly good athlete. Quick, explosive and extremely fluid, York can score from anywhere on the floor and has a very natural feel for operating on the court.

First and foremost a tremendous shooter, York elevates high off the ground on his jumper and shows an incredibly quick release, which nullifies his lack of size to a certain degree. Able to come off screens, make shots with his feet set or put the ball on the deck and pull up in the mid-range area, York is always on balance with his jumper and displays tremendous body control for a player his age.

Also capable of creating for himself or others off the bounce, York finishes craftily with both hands around the rim, sometimes with a floater, but in many cases will just go up and hammer home a dunk jumping off one leg. While clearly a scorer, York displays good enough court vision to lead you to believe that he'll be able to play the point down the road, as he's an excellent ball-handler and not a selfish player in the least bit--making smart, simple passes with regularity.

Defensively is where York will need to improve the most to earn immediate playing time from Sean Miller at Arizona, particularly if asked to play off the ball and guard players who are much bigger than him. His lack of size and length is a hindrance, but he also lacks some aggressiveness in this area, struggling to fight through screens and not always putting the best effort in like many players his age.

A long, strong, athletic big man with good hands and a developing skill-set, it's easy to see what both the football and basketball recruiting services like about Shaq Goodwin (#24 Scout, #26 Rivals, #19 ESPN). Although possibly a bit undersized at 6-8, he has the frame, wingspan and motor coaches love to have in their frontcourt rotation, and he has no qualms at all about what he is at this stage.

Goodwin gets most of his production running the floor (ferociously) in transition, crashing the offensive glass and finishing whatever his teammates are able to create for him around the rim with powerful dunks. His post game shows potential but is still a work in progress, and he doesn't attempt to do much of anything outside the paint.

Defensively, Goodwin gets by mostly with his physical tools at this point, and is able to be quite a presence on the glass when he's fully dialed in. His lack of experience and average feel for the game will reveal itself from time to time, but considering his age, that's not a surprise.

Scouts will likely be watching closely how the rest of Goodwin's game comes along in the next few years, as his physical tools are a commodity you don't find every day. Right now he's talking about playing both football (he's also a highly touted wide receiver prospect) and basketball in college, but it's difficult to see how that would be possible considering the demands of both sports.

A smart and versatile combo forward with good size, length and mobility, Sam Dekker (#35 Scout, #18 Rivals, #26 ESPN) is the type of player any college coach would love to have in their rotation. Capable of scoring elegantly in transition or with catch and shoot jumpers in the half-court, Dekker is a mature player with good timing and a nice feel for the game. He moves off the ball well, is a solid passer and puts a good effort in defensively, even if his lateral quickness might hamper him against certain matchups he faces at the three spot. Dekker is a bit stuck in between positions and might see some time as a face-up 4 early on in Bo Ryan's offense, which won't be an issue considering his toughness and activity level. His skill-level is good for his age but will he'll need to continue to refine his ball-skills as the competition stiffens, as well as work on his body.

A very highly regarded prospect according to the recruiting services, Amile Jefferson's (#20 Scout, #36 Rivals, #24 ESPN) reputation stems mostly from his excellent potential at this point, rather than his current production.

A long, rangy forward somewhat stuck between positions at this point, Jefferson is a very good athlete who works hard on the court and is able to make his presence felt thanks to his excellent physical tools.

Not an overly skilled player, Jefferson finds ways to score in transition and on the offensive glass, where his length and explosiveness shine through. In the half-court, he's limited mostly to straight line drives with his right hand, struggling to change directions with the ball or use his off hand. His jump shot has a long ways to go in particular, both with his feet set and off the dribble, as he does not elevate very smoothly off the ground for pull-ups.

Defensively, Jefferson puts a very good effort in and is capable of making his presence felt on the glass, in the passing lanes and as a shot-blocker thanks to good timing and the energy-level he displays. He has the versatility to guard multiple positions, which will help him as he inevitably make the transition to playing on the perimeter moresomething he'll almost certainly have to do considering his size and lanky frame.

Those around him say very good things about his work ethic and character, which is obviously a major plus at his age.

Combo forward Winston Shepard (#43 Scout, #40 Rivals, #68 ESPN) was somewhat up and down throughout the course of the adidas Nations, but there was no mistaking his merits as a prospect.

A small forward with excellent size, length and athleticism, Shepard was arguably the most versatile defender seen in LA, being the one responsible for locking down the opposing team's most dangerous scoring threat every time he stepped on the floor. He did a terrific job hounding opponents around screens and denying the ball, showing excellent lateral quickness and intensity, to go along with the size and wingspan to lock down positions 1-4 depending on what was asked of him.

Offensively, Shepard is still a work in progress, as he was most effective in transition, where his explosiveness really shines through. His shot-creating ability shows potential, mostly thanks to his long strides and terrific first step his ball-handling skills are still mostly a work in progress. Shepard has the ability to knock down the occasional spot-up three, but his perimeter shooting looks to be pretty inconsistent from what we saw.

Shepard's effort level and focus wavered at times, as did his body language, which wasn't always the best around his teammates. When he was fully dialed in and playing up to his strengths, Shepard looked every bit the part of an NBA prospect, but that wasn't always the case. Thankfully he still has plenty of time to figure things out.
Read Next...