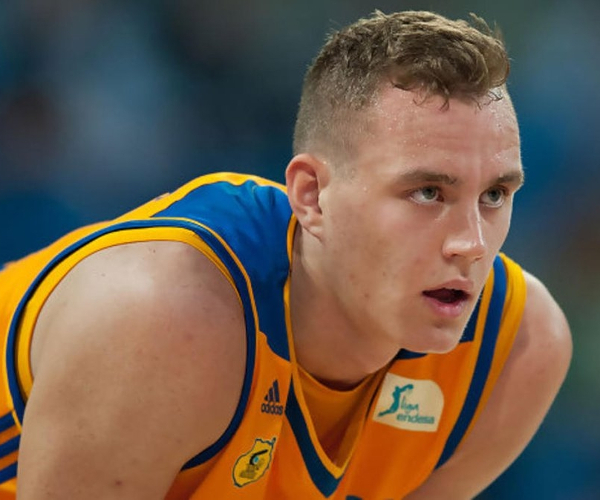 Getting to Know: Anzejs Pasecniks

Bogdan Karaicic
@bhoops2016
Talking with Anzejs Pasecniks about different facets of his game, what he does well and what he needs to work on, with overlayed clips from this season and the past showing his progress.

Anzejs Pasecniks has been on the radar screen of NBA scouts for some time now, particularly after a strong showing at the 2013 U18 European Championships in his hometown of Riga, where he paired with fellow Latvian 7-footer Kristaps Porzingis to form an extremely productive twin-tower tandem. Pasecniks was no less productive than Porzingis at that tournament, but was unable to make the type of progress physically or productivity-wise scouts were hoping to see at the pro level in the following seasons. He languished on the bench for VEF Riga in 2013-2014 and 2014-2015, struggling to get on the court for the most part, and not playing particularly well when he did.

Born very late in 1995, Pasecniks' frame has taken time to properly fill out. Once very frail, he's put on quite a bit of weight since moving to Gran Canaria in Spain in the summer of 2015. After somewhat of a quiet first season getting acclimated to living abroad for the first time as a 19-year old, Pasecniks has exploded in his sophomore season in the ACB, ranking in the top-10 in the competition in PER, pumping in a point every two minutes on tremendous efficiency. Taking advantage of frontcourt injuries, he's playing close to 20 minutes per game in his last ten contests (both in the EuroCup and ACB), drawing quite a NBA executives to exotic Las Palmas, the capital of the Canary Islands, off the coast of Morocco.

Now listed at 220 pounds, Pasecniks has a frame that can continue to carry more weight, as he's well-proportioned in the upper and lower body. Despite standing a towering 7'2, Pasecniks has tremendous agility for someone his size, covering ground fluidly and being extremely light on his feet. He runs the floor well, is quick off the ground, and can play above the rim with ease, often catching lobs in impressive fashion.

Pasecniks has found great chemistry with American point guard Bo McCalebb in the pick and roll game this season, setting screens and diving to the rim with terrific timing and dexterity. He catches virtually everything thrown his way, and has terrific balance and coordination as a finisher, usually going up quickly as soon as he corrals a pass. Even when he can't finish plays with a dunk, he shows very nice touch with either hand, using his big reach to find creative angles to get his shot off.

Pasecniks also shows great promise from the perimeter, knocking down a number of jump-shots on the season. He's 5/9 from beyond the arc on the year, but has hit some mid-range attempts as well, sporting a very fluid, natural and confident stroke. He can also put the ball on the floor as well attacking closeouts, sometimes quite skillfully using either hand. The flashes he shows creating his own shot at his size from the perimeter could lend themselves to his work inside the post as his frame fills out in time, especially considering the degree of difficulty on some of the spin moves he executes, thanks to his advanced body control.

Still lacking experience due as a 20-year old who didn't see much playing time prior to this season, Pasecniks' feel for the game is a work in progress at this stage. He's registered just 8 assists in his 559 minutes in Spain the past two seasons, or one every 70 minutes of action. He can be somewhat of a black hole at times, looking to fire away every time he gets a catch, and struggling to move the ball fluidly within the flow of the offense when he does try to get others involved. These are things you'd like to see your stretch big man be able to do from the perimeter, and is something he'll have to improve on in time.

There are also some question marks about just how good of a shooter Pasecniks is, despite the tremendous results, and aesthetically pleasing mechanics, he's displayed this season. He's a career 57% free throw shooter for his career in 180 games we have logged in our database, and is so far making a bafflingly poor 14/31 (45%) of his attempts on the season. Since he's doesn't project as a major presence with his back to the basket, his jumper is an important factor in his ability to find a role at the NBA level.

The other major component will be his work on the defensive end. This is likely the main reason why Pasecniks is only averaging 14 minutes per game through 19 contests thus far this season, as he's really struggled at times with the physicality and experience of the far more polished big men he's asked to match up with at the ACB/EuroCup level.

Pasecniks still gets pushed around quite a bit inside the paint, not having the bulk, strength or toughness to hold his ground, avoid getting backed down, or give up deep post position. Opposing coaches often go at him as soon as he gets on the floor, and his fundamentals are still very much a work in progress, as he has a tendency to reach, bite on fakes and is very upright trying to defend ball-screens. He's not a consistent rim protector despite his tools, often being a step slow to recover and contest shots around the rim, as he does not demonstrate great awareness at this stage.

Where Pasecniks really struggles in particular is on the defensive glass, where he's averaging just 5.6 rebounds per-40 minutes, a poor rate for his position. Much of this has to do with his lack of strength and physicality, but some is also due to his just-decent instincts, as he misses box-outs and doesn't go out of his area as frequently as you might hope.

With that said, Pasecniks will wow you at times with his ability to cover ground fluidly at his size, getting low to the ground and sliding seamlessly staying in front of guards, but he really doesn't know how to use this consistently at this stage. He is somewhat of a blank canvas still on the defensive end, with many of his flaws being fundamental, experience and technique related, as opposed to a lack of ability. He's upped his shot-blocking numbers to a respectable 2 per-40 this season, which is something to continue to monitor as the season moves on.

Despite the flaws Pasecniks shows, it's important to remember that he's still only 20 years old (turning 21 next week), very much a late bloomer, and is just now starting to get his first taste of consistent rotational minutes at the professional level. Almost every team in the NBA is looking for a 7-footer who can catch lobs, make 3-pointers, cover ground fluidly defensively, and protect the rim. Players in his mold are so rare that someone is bound to take a chance and see how he looks with a few more years of development as he enters his mid-20s and completes his physical maturation.

Another thing that will undoubtedly help Pasecniks is just how well his former Latvian teammate Kristaps Porzingis is doing in the NBA, after posting similar numbers in the ACB/EuroCup. While Porzingis was a year and a half younger at the time, and is simply a different caliber of prospect, the two are putting up almost identical scoring, rebounding, passing and shot-blocking numbers on a per-minute basis. Porzingis averaged 21.5 minutes per game, while Pasecniks is playing just under 14, but Pasecniks plays for a much better team, and is far more efficient offensively at the same stage. What's interesting is that Gran Canaria's head coach, Luis Casimiro, actually coached Porzingis for the second half of his final season in Seville.

In a draft class that appears extremely weak for American big men thus far, Pasecniks has been able to capitalize nicely so far with a strong season in Spain, and will undoubtedly be monitored closely by NBA teams as the year moves. He's already put himself in position to be considered a first round caliber prospect, and can continue to gain steam as the season moves on.
Read full article

Weaknesses:
-Painfully thin at the moment
-Gets pushed around mercilessly around the basket
-No real skill-level offensively at this stage
-Gets boxed out easily in the paint
-Gets winded very easily

Outlook:
Extremely late bloomer who only recently picked up the game. Has made major strides in a short period of time reportedly. Appears to have some intriguing natural talent. Will take at least 2-3 years to even begin filling out his frame. If he is able to put on weight down the road, he may develop into an interesting prospect.
Read full article