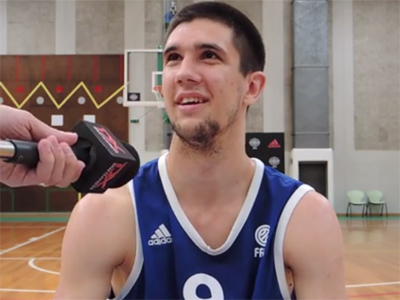 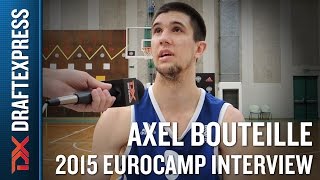 DraftExpress
@DraftExpress
As good as Axel Bouteille was yesterday and today, this game reinforced why needs to work on his spot up shooting to improve his draft stock. Going 0-4 from 3 he continued to make midrange shots at a nice clip, scoring 16 points on 7-16 shooting overall. With that said, considering only 15% of his field goal attempts were 3-pointers in French League play this season, the 6'6 swingman will need to improve his range as he'd have a harder time scoring inside the arc at the NBA level. Players at his position are expected to be consistent 3-point shooters, so proving he can do that in France in a bigger role for Chalon next season would undoubtedly do wonders for his draft stock.
Read full article

DraftExpress
@DraftExpress
For the French side, Chalon shooting guard Axel Bouteille was the top performer, scoring 22 points on 20 shots. Appearing in 35 games in the French League in his first full season at the senior level after averaging a ridiculous 24.1 points per game at the Espoirs level a year ago, Bouteille's reputation as a scorer certainly held up here. A crafty offensive player who uses an array of eurosteps, changes of speed, and terrific instincts to create opportunities for himself, Bouteille looked to impose his will early and often in this game.

Lacking great length and being just a fair athlete, the 6'6, 95-born swingman had a number of shots rim out, but did a little bit of everything, as he figures to be one of this team's top players at the 2015 FIBA U20 European Championship after averaging 10.5 points per game at last year's edition of the event. A bit of a unique player in that he attempts a lot of midrange jump shots but very few 3's, Bouteille will need to continue to improve his consistency as a set shooter to help prepare himself for the higher quality competition he'll face at the senior level, but his overall skill level and scoring instincts should certainly pay dividends for him in time in the European game and could give him a shot at getting drafted down the road. He didn't declare for this year's draft, but won't be automatically eligible until 2017.
Read full article

Jonathan Givony
@DraftExpress
Axel Bouteille finished the game with 10 points on 5/7 shooting. The leading scorer in the French junior league, the 6'6 wing is one of the top 1995-born prospects in France and a talented, aggressive slasher whose footwork and craftiness make him an effective offensive player. While he doesn't have great strength or shooting mechanics, he finds ways to score from the inside and out. Knocking down a pull-up jump shot and creating space with pivots and spins, it will be worth monitoring how Bouteille translates to the senior level. He saw a few minutes here and there for Chalon in the French League and EuroCup, but if he can become a more proficient shooter and continue to keep defenders off balance with his savvy midrange game, he'll earn plenty of playing time and attention from scouts in the coming years.
Read full article

Strengths:
-Very good scoring instincts
-Excellent 3-point shooter. Took four 3-pointers per game, made 56%
-Can score off one dribble pull-ups
-Attacks unbalanced defenses in transition
-Solid feel for game
-Efficient player who does not force himself on the game

Weaknesses:
-Little bit small for a wing player
-Does not appear to be a great athlete
-Struggles to create high percentage shots in the half-court
-Potential on defense looks limited

Outlook:
Far from the best prospect on his team, but often the only one to show up and give a focused, balance effort. Looks to have solid potential at the pro level if he continues to improve his all-around game.
Read full article