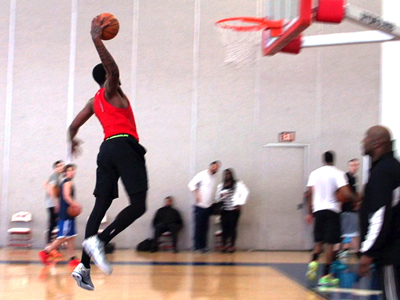 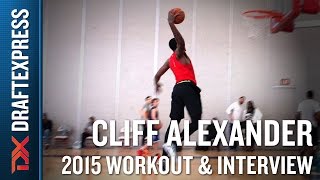 Mike Schmitz
@Mike_Schmitz
-Cliff Alexander, who didn't play the second day due to injury, measured the third-largest wingspan at 7'3.5, consistent with his past measurements. Alexander, standing 6'8.5 in shoes with a 248 pound frame, also posted the biggest difference between height (no shoes) and standing reach with a 29.75 gap. Alexander's 9'1 standing reach ranked second among all players at the camp. Measurements have never been Alexander's problem, however, as he'll have to play with a consistent motor and strong enough mentality to work his way back into the NBA. He posted the second-worst lane agility score at the camp, which doesn't bode well for his switch-ability at the NBA level, but isn't a deal breaker either.
Read full article

DraftExpress
@DraftExpress
An interview with Kansas's Cliff Alexander featuring footage from his pre-draft workouts in Chicago.

Cliff Alexander came into Kansas with a huge reputation, ranked as the #2 player in high school basketball according to the RSCI. He had a very up and down season, coming off the bench for much of the year and playing just 17 minutes per game, seemingly never really getting on the same page with the coaching staff. Only two weeks after finally breaking his way into the starting lineup in mid-February, he was ruled permanently ineligible by Kansas amid concerns revolving around his amateur status, reportedly due to a loan his mother took out issued based on his future earning potential. This ended his season and college career after just 28 games, right before the Big 12 Conference Tournament, which also meant no NCAA Tournament appearance.

Alexander is somewhat undersized for a power forward standing around 6-8 in shoes, but makes up for that with a chiseled 254 pound frame and very long arms, with a wingspan measured between 7-2 and 7-3 ½. His big hands, strong body and huge wingspan may even allow him to see some minutes at the center position in smaller lineups, which his skill-set might currently dictate he's actually better suited for. Athletically, Alexander is very mobile, although not particularly explosive, running the floor hard and trying to dunk everything he can.

Not a very prolific scorer at the college level (15.8 points per-40), most of Alexander's offensive production came off cuts and offensive rebounds, which made up about 70% of his points from the field this season. He sets solid screens, rolls hard to the basket, and converted a solid 63% of his attempts around the rim, mostly thanks to his strength, length and aggressiveness, despite not the most vertically explosive player around.

Alexander showed some very small flashes in the mid-range area this season, hitting a handful of jumpers to go along with converting 67% of his free throw attempts, which might leave some room for optimism regarding his development in this area down the road. He has solid shooting mechanics, and a very smooth release, which indicates he may be able to extend his range out somewhat as his career moves on, which would help him greatly rather than being someone who exclusively clogs up the paint.

With that said, Alexander's best attribute as a NBA prospect is likely his rebounding, which is an area he'll be able to hang his hat on and hopefully use to get playing time early on in his career. He is especially prolific on the offensive glass, grabbing 4.4 per-40 minutes, the seventh best rate among DX Top-100 prospects. His strong frame, long arms, big hands and terrific toughness all help him out significantly here, as he does a great job of moving other players around and banging in the post trying to get his team extra possessions.

While Alexander was usually able to simply overpower opponents at the high school level inside the paint en route to easy offense, he had a difficult time establishing that same dominance on the interior in college. His footwork is underdeveloped, and he does not have a wide array of moves or great touch around the basket, which limits his effectiveness if he can't simply bully his way through defenders with brute strength. Alexander shot just 33% from the field in post-up situations this season according to Synergy Sports Technology, while turning the ball over on 20% of his attempts. 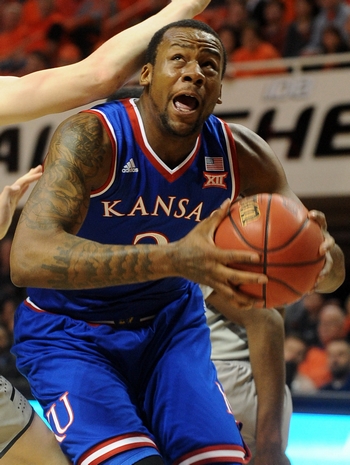 Alexander also ranks as one of the worst passers in this year's draft class, generating just 12 assists in 492 minutes of action this season, or one for every 41 minutes he's on the floor. His 5.4% assist percentage ranks second worst among players currently projected to get drafted, as he simply doesn't read the floor very well, is predictable with what he's trying to accomplish, and struggles to react to what the defense throws at him, often looking very rushed with his moves.

Defensively, Alexander has good tools, including his strong frame, tremendous wingspan and solid mobility, which helped him block nearly 3 shots per-40 minutes, the sixth best rate among DX-100 power forwards. He's very competitive inside the paint, and shows some potential moving his feet out on the perimeter, which could be developed into something useful in time.

With that said, he has a long way to go in terms of realizing his potential on this end of the floor, as his fundamentals and technique are fairly poor, and he has a tendency to get lost badly off the ball, biting on fakes and committing silly fouls. He struggles in particular on the pick and roll, getting out of his stance quickly and being slow to react to what's happening on the floor, and he doesn't do a good enough job working early to deny deep post catches, standing straight up and giving up paint position far too easily. Being more active and attentive on this end of the floor, especially in terms of getting and staying in a stance consistently, will go a long ways in helping him carve out a role early on in his career.

Alexander generated just five steals all season in 492 minutes (.4 per-40), which is a major red flag for a player with a reported 7-3 wingspan, indicating a lack of awareness and overall feel for the game. While it's not unusual for players under Bill Self to not get many steals historically, Alexander did much of the same in the 702 non-collegiate (mostly EYBL, Adidas Nations) minutes we have charted, with 14 steals (.8 per-40) in that span.

Alexander's freshman season did not work out according to plans, as he got less than 500 minutes of game-time and missed out on the crucial month of March which could have been very helpful for his development. After physically dominating opponents in high school, his skill-level, athleticism and feel for the game all got exposed as being inadequate for playing the same style of basketball he grew accustomed to early on in his career, particularly since he was no longer the biggest and strongest player on the floor at all times. Alexander will now need to find a true position and role on the basketball floor and embrace being a hustle guy who simply outworks the competition with toughness and grit, while trying to improve his offensive polish and overall defense through hard work and experience.
Read full article

Strengths:
-Not terribly tall (6-8 ½ in shoes), but possesses a great frame, huge hands and an extremely long 7-3 wingspan
-Tremendous athlete. Quick feet. Runs well. Highly explosive. Terrific strength
-Plays with toughness and intensity and a real chip on his shoulder
-Extremely efficient offensively thanks to ability to score inside the paint
-Finishes everything with a dunk
-Terrific rebounder on both ends of the floor
-Possesses decent shooting mechanics and soft touch
-Can make plays defensively thanks to his tremendous physical tools

Outlook: Chiseled big man who combines phenomenal physical tools with an excellent motor. A man amongst boys at the high school level, where he can dominate purely off his strength, athleticism and intensity. Will have to develop his all-around game against more physically mature opponents, but should be able to make quite an impact at any level with reasonable development.
Read full article

Weaknesses:
-Undersized at 6-8
-Has high hips. Lumbers a bit
-Needs to improve skill-level. Post-game, ball-handling, jump-shot
-Doesn't know how to play defense yet

Outlook: Wasn't healthy all summer after suffering an ankle injury. Showed great physical tools and potential in the little we were able to see.
Read full article