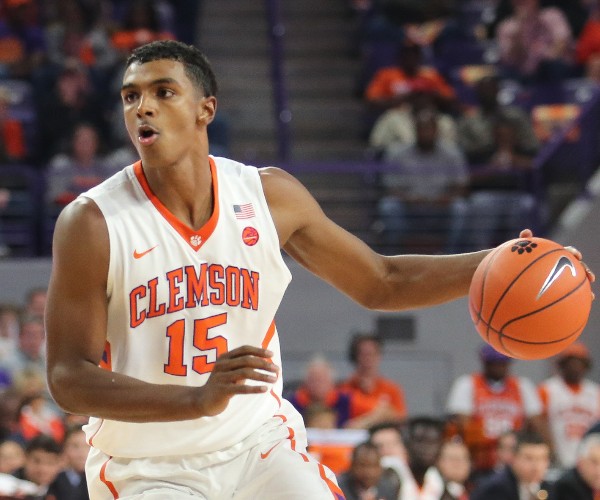 A top 100 high school recruit, per the RSCI, after spending a post graduate year at Hargrave Military Academy in Virginia, Grantham committed to Clemson in October 2013. In his two seasons at Clemson, Grantham has seen some success and has been a key role player on teams that have hovered right around .500. He made some strides as a player during his sophomore season, and had likely his most complete game of the season against Notre Dame in February where he recorded 15 points, 7 rebounds, 4 assists while shooting 4/6 from beyond the three-point line. Grantham's development will be monitored throughout the year, in large part because of teammate Jaron Blossomgame, but how he responds to playing under a microscope will be something to keep an eye on. 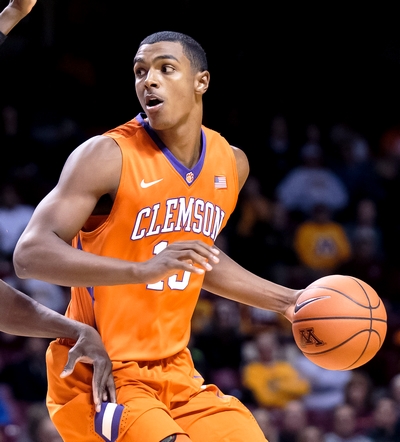 Listed at 6'8 and weighing a solid 215 pounds, Grantham has excellent size for the small forward position. Grantham returned to Clemson as a sophomore with an improved frame evident in his explosiveness in transition and around the rim in the half court. He doesn't possess elite quickness, but is a capable overall athlete, who may ultimately be able to play some small-ball power forward.

The majority of Grantham's offensive contribution came as a spot up shooter though he did take on a greater responsibility as a playmaker. As a freshman, he struggled from behind the arc, shooting only 27.9%, but after refining his mechanics, particularly tweaking his elbow placement, he saw a jump in effectiveness, shooting 35.4% on 5.1 attempts per game as a sophomore. Grantham does have a low release point, doesn't get much elevation and at times is off balance, which can be all become issues when defenders close out with speed.

Despite his growth as a perimeter shooter, Grantham saw a decrease in his effectiveness from two-point range, as his field goal percentage was an unimpressive 42.3% inside the arc. Grantham struggled to make shots off the bounce, shooting only 20.9% per Synergy Sports Technology, at times settling for difficult, contested pull ups. He is somewhat upright in his stance and doesn't have blow-by quickness when attacking from the perimeter, limiting his ability to get all the way to the rim to finish. When he was able to get into the paint he did a solid job of finishing plays, using either hand around the rim, showcasing an ability to finish above the rim or with a soft touch, shooting 53.2% on shots around the basket, per Synergy Sports Technology.

Grantham saw his responsibilities as a playmaker, particularly in the pick and roll action, more than double as a sophomore, and he responded fairly well, though his assists numbers remained relatively pedestrian at only 2.9 per-40. Grantham shows a certain maturity and level of poise when he is attacking in the pick and roll, doing a solid job of reading taggers and making the right play consistently. He needs to continue to improve his ball handling ability, which was a weakness when being guarded by smaller quicker players, though he was able to keep his turnovers relatively low at only 1.7 turnovers per-40. With Grantham having solid success in the pick and roll action, it will be interesting to see whether he will feature in that role more often for the Tigers, especially after the graduation of ball dominant guard Jordan Roper.

Despite playing in a bit of a hunched stance, Grantham has showcased an ability to be a multiple position defender. He isn't an elite lateral athlete, but has solid length and consistently plays hard, which helps negate some of his physical shortcomings. As a sophomore, Grantham averaged 1.2 steals per-40 in part because of his ability to anticipate and generate deflections in the passing lanes. Clemson employed Grantham at the top of their 1-3-1 trap in the half-court when trying to pick up the pace, and Grantham's length and disruptiveness played a huge role in the usefulness of that defensive scheme.

Grantham needs to put forth better effort when guarding against pin downs or floppy screens while also being more physical directing the ball screen action. Grantham's off ball awareness at times fluctuates, and he is late reacting to his opponent cutting or moving. Too often in the half-court, Grantham allowed the offensive player to dictate where he wanted to attack rather than effectively forcing him one direction. As a junior, it will be interesting to see whether or not Grantham takes greater pride in his defensive effort and commitment to the defensive glass, where he averaged an unimpressive 3.7 defensive rebounds per-40.

It will be interesting to see what sort of role Grantham creates for himself during his junior season at Clemson, as he possesses an intriguing skill set as a playmaker and spot up shooter, but needs to be more effective inside the three-point arc, while also maintaining a high level of defensive effort. Grantham's potential as a multiple positional defender and his natural feel for the game are likely to pique the interest of scouts and decision makers, and if the Tigers can make their first NCAA appearance since 2011, it will only help Grantham's standing.
Read full article

Josh Riddell
@Joshua_Riddell
Ranked as one of the top 100 players in the high school class of 2014 according to the RSCI, Donte Grantham stepped into the void created by the departure of K.J. McDaniels to play a key role for the Tigers as a true freshman. Starting every game and finishing the year averaging 8.8 points and 4.6 rebounds over 29.6 minutes per game, Grantham flashed intriguing long-term potential, even if he wasn't overwhelming productive.

Listed at 6'8 with a 210 pound frame, Grantham has excellent size for a player that spent the majority of the season playing small forward. A very good athlete overall, Grantham doesn't have elite footspeed, but does possession nice explosiveness and body control. 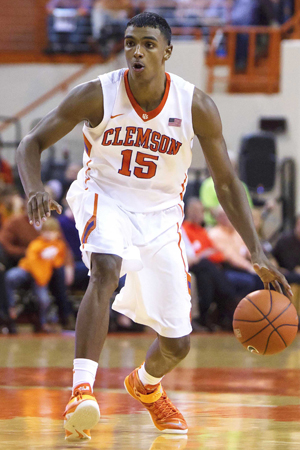 Offensively, Grantham's primary contributions came as a set shooter, though he was asked to do a little bit of everything in his freshman campaign. With just over half of his 8.8 field attempts per game coming beyond the arc, Grantham, for better or worse, hunted jump shots both in transition and the half court. Connecting on 28% of his three's on the year, the sophomore's mechanics are fairly solid, but his consistency still leaves something to be desired, especially in catch and shoot situations and at the free throw line where he shot just 55%.

A bit of a jack-of-all trades without one truly elite skill, Grantham was decidedly more effective when he was able to find opportunities at the rim, especially in transition. Lacking dynamic ball handling ability even though he flashes the ability to push the break himself and being a bit passive at times offensive, most of Grantham's opportunities inside came on broken plays or when he was attacking closeouts. When he was able to get inside, he shot a respectable 55%. He absorbs contact effectively when he puts his mind to finishing inside, but also shies away from going up strong inside periodically as well.

Thrown into the fire a year ago playing a role that had him running off screens and even handling the ball in the pick and roll on occasion, Grantham clearly has a lot of room to grow as a scorer on the whole, but should benefit from the significant opportunities he received as a freshman, and figures to receive moving forward, in the long run.

Aside from his ability to score the ball, Grantham proves to be a capable decision-maker and rebounder. He isn't a tremendous playmaker, but is unselfish when he sees an open teammate or an opportunity to feed the post. Though he isn't a particularly prolific rebounds, he contributes on the glass from the wing, scrapping for loose balls and crashing back inside when he isn't boxes out.

Defensively, Grantham's length and activity level help him hold his own. He gets beat of the dribble by smaller players from time to time, but makes athletic plays around the rim helping his teammates and seems to have the potential to be a very solid defensive player down the road if he makes an effort to be more aggressive as his body and game continue to mature.

Though he's far from a finished product, Donte Grantham's combination of size and versatility make him an intriguing player to keep an eye on in the coming years as he figures to become a prominent part of Clemson's gameplan.
Read full article