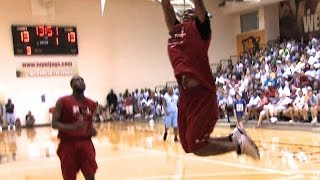 Matt Williams
@DraftExpress
Another unsung rookie, Hill made a name for himself with a solid, but inefficient rookie season in San Antonio. After having a hard time impressing with his play last summer at the Las Vegas Summer League and Rocky Mountain Revue last year, Hill looked very solid this week aside from one poor showing against the staunch defense of Jerryd Bayless, Pooh Jeter, and the Portland Trailblazers. 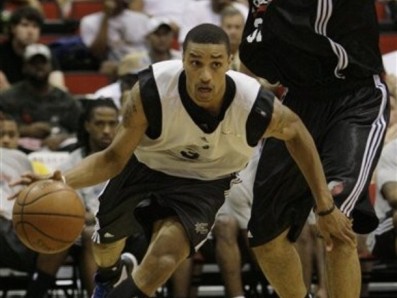 A solid athlete with a ridiculous 6-9 wingspan, Hill primarily functioned as a point guard for the Spurs, but also spent some possessions working off the ball. A dominant scorer at IUPUI, Hill still appears to be adjusting to playing the point. More than quick enough to get to the where he wants to go on the floor against most defenders in this setting, Hill did a very good job creating offensive for himself from the inside and out, but didnt always look very comfortable distributing the ball, especially at full speed in transition. He made a handful of smart passes in half court sets, mostly when running the pick and roll, but for every good decision Hill made, he seemed to make a poor one shortly after.

Many of Hills problems came when he was either making a tough pass at a full sprint of when he was surveying the lane after turning the corner off the dribble. More often than not, these are situations in which Hill would normally look to score, which was likely his biggest issue here. Sometimes driving at the rim from bad angles, Hill seemed to have an especially hard time with his decision-making when he was forced towards the baseline. Stuck in no-mans land, Hill still has a lot to learn about distributing the ball, but his scoring ability, length, and attitude make him a promising player for the Spurs both this year and down the road.

Much of that promise manifested itself around the rim in a game against the New Orleans Hornets where Hill used an Ian Mahinmi screen to free himself for a back door alley-oop pass that he effortlessly flushed with two hands on his first touch. On a subsequent possession, he was able to clear his defenders shoulder on the pick and roll before rushing to the rim for an impressive one-handed slam. Though he added to his highlight reel with those plays, the more important development Hill has made lies in his physical assertiveness at the rim. He struggled to finish at the rim last season, and still does at times, but he got to the line at a fantastic rate here in Vegas due to his willingness to take contact at the rim. While he doesnt make things look as easy as Jerryd Bayless, hes beginning to complement his smooth finishing ability with some stronger finishes as well.

Though Hill definitely showed some good things when he was in attack mode, his perimeter arsenal is still a work in progress. Able to get to where he wants to go on the court against many players hes matched up with, Hills lack of catch and shoot ability isnt a major concern, but it will limit him in some ways moving forward. With Tony Parker running the show for the most part and a number of other potential ball handlers to compete with, it would be nice to see Hill develop a more reliable three point stroke to be a better option playing off the ball. If nothing else, itll give him a little more room to operate when looking to pass off of his drives and open up more space for the solid midrange jumper he showed here.

Defensively, Hill had a solid week, but had his share of troubles. Often matched up with the opposing teams point guard, Hill found himself at a disadvantage at times. Darren Collison and Pooh Jeter both gave him some problems, especially Jeter, who kept him perpetually off-balance when the two were matched up one-on-one. In contrast, Hill was the only player able to slow down Marcus Williams (UConn). A competent defender who has some trouble getting around screens, Hill is the type of player that can be successful in a well run system like the one the Spurs implement. Hes going to have problems in certain matchups, but hes more than capable of playing his many into his help side defender and not taking too many unnecessary risks. His length actually made him look a bit better against opposing shooting guards, since he had an easier time keeping up with them, and gives him the ability to close out shooters more effectively than the average player his size.

Though he finished with an even assist-to-turnover ratio and didnt blow anyone away with his shooting, this week offered a nice opportunity to see Hill playing out of his NBA role. With clearly defined weaknesses and some nice tools to work with, the IUPUI product is a player to keep an eye on this season. His ability to run the point off the bench for San Antonio may be a point of interest during their probable run deep into the playoffs.
Read full article

Matt Williams
@DraftExpress
The former IUPUI star looked better today than any of his games in Las Vegas. He was able to take advantage of Utahs lack of experience in this setting by being aggressive and playing hard. Hill showed a nice first step, and had little trouble using his athleticism advantage to get to the rim. The young guard had no trouble getting to the line against Utah foul prone front line, and showed no hesitation to take contact. Hills jump shot wasnt falling today, but that didnt slow him down in the least. The one three he did make was off of a quick pull back move that he hit despite getting fouled. He did a decent job setting the table for his teammates, but got a little too happy with his dribble at times. Defensively, he took advantage of Kevin Krugers rusty ballhandling, stripping him on a couple occasions. Hill had a big game today, but hell need to prove he can do that same against players that have seen Summer League action.
Read full article

Mike Schmidt
@DraftExpress
Hill had a decent game at best today. He scored well, primarily because he had little trouble getting to the line, but didnt show much from the perimeter. Hes not going to be able to get into the paint in the NBA as easily as he did today, and could stand to use his time in Vegas to work on his outside shot. He did knock down an NBA three, but showed little else from the outside. Hes a decent ball handler, but has a hard time retreating from pressure. That showed today on a few occasions. His passing ability is still a work in progress, just like the rest of his point guard skills. He committed a ton of fouls, and had a tough matchup against Memphiss more physical guards. Hills got a lot to learn, but has nice tools to work with.
Read full article

Jonathan Givony
@DraftExpress
George Hill showed why so many scouts have been saying positive things about him throughout the course of this camp, scoring 15 points to go along with 6 assists and a lone turnover in 24 minutes of action. He ran his offense smoothly and effectively, looking comfortable executing his teams sets and finding the open man confidently. He shot the ball very well from behind the arc (3-7) as well.
Read full article

Jonathan Givony
@DraftExpress
In the first game we liked the way the extremely smooth George Hill conducted himselfhis wingspan made him a presence defensively and he clearly has a high basketball IQ and excellent perimeter shooting ability. He's definitely not a true point guard just yet (he over-dribbled at times and ran down the shot-clock) and is just an average athlete at best, but he looks like a versatile player who does not look out of place in the least bit despite coming from IUPUI of the Summit League. Indiana Pacers scout Kevin Mackey (who knows him extremely well considering their proximity) told us back in January that George could start for any team in college basketball, and Hill has definitely backed him up.
Read full article

Jonathan Watters
@DraftExpress
Also training at Champions Academy is current IUPUI standout George Hill, who averaged over 18 points per game as a sophomore two years ago before redshirting 06-07 due to injury. Hill displayed some intriguing combo guard skills and a bit of smooth athleticism that make him a player to watch over the next two years.
Read full article