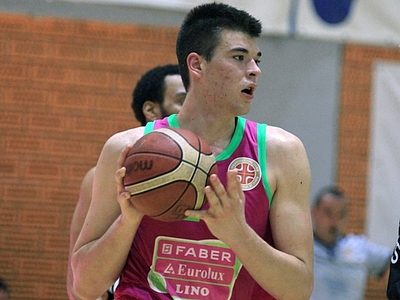 One of a number of intriguing international early entrants for the 2016 NBA Draft, Ivica Zubac is one of the less established prospects among that group, growing his standing in the eyes of NBA decision-makers almost entirely in the last ten months. Born in Bosnia, but a naturalized Croatian like many from the Mostar area of southern Herzegovina, Zubac had spent the majority of his career playing for Cibona and its junior teams coming into the 2014-2015, season outside of a loan to a second division a few years ago when he was just 16.

Hampered by a foot injury in 2014 that prevented him from seeing minutes and getting his stock off the ground, Zubac emerged from relative obscurity to average 4.5 points and 2.9 rebounds per game in the Adriatic and Croatian Leagues for Cibona a year ago, but it wasn't until the 2015 FIBA U19 World Championship that he established himself as a real prospect for the NBA.

Coming into last summer with limited international experience under his belt, having only played a bit part at the 2013 FIBA U16 European Championship, and missing the summer of 2014 entirely, Zubac averaged a sensational 17.6 points and 7.9 rebounds over 26.5 minutes per game for Croatia's U19 squad in Greece to finish second among all players in PER and help his team to a silver medal. The young 7'1 center followed that up averaging 15.8 points and 12.9 rebounds per game at the U18 European Championships only a few weeks later, emerging as one of the most promising draft eligible big men outside of the United States.

Returning to Cibona to start the year, but missing all of October and most of November due to a meniscus injury, Zubac's stay with the historic club lasted only a month and change after he got healthy, as financial issues led him to terminate his contract and explore other options after averaging 8.3 points and 3.9 rebounds over 15 minutes per game in seven appearances in the Adriatic League and FIBA Europe Cup. After a Croatian Basketball Federation ruling that ultimately denied his attempt to sign with Cedevita, the Euroleague side that also happens to call Zagreb home, Zubac found himself in limbo for a time before latching on with Mega Leks in Serbia, the prospect-laden team run by his agency, BeoBasket.

Unable to play in the Adriatic League because of the regulations surrounding transfers in that league, Zubac announced his intention to declare for the 2016 NBA Draft while watching from the sideline, as Mega Leks made it all the way to Adriatic League Final, where they fell to Red Star in three games, and eventually finished in third place in the Serbian league after defeating FMP in the playoffs. The talented young big man made his debut in the Serbian League on May 8th, scoring 16 points in 25 minutes in his first competitive action since January 3rd. Averaging 9.9 points and 4.7 rebounds per game in 13 games, Zubac made his presence felt down the stretch before Mega Leks fell to Red Star in the Serbian League semi-finals.


Listed at 7'1 in shoes with a strong 265-pound frame a reported 7'4 wingspan, and what appears to be a massive standing reach, it isn't difficult to see what makes Zubac an intriguing prospect on first glance. Possessing outstanding size for a center at any level, Zubac matches his physical stature with an intriguing blend of fluidity and skill. He isn't particularly explosive and his body has plenty of room to mature, but he has very promising physical tools for the NBA level.

Playing a fairly significant role when he's actually been able to get on the floor this season, Zubac does most of his damage in the post, but also contributes as a finisher, proving fairly nimble rolling to the rim, running the floor in transition, and crashing the offensive glass.

Zubac wasn't a workhorse on the block at the senior level relative to the torrid pace he scored at in the U19 World Championship, but he did pour in 31 points against Borac Cacak in late May. He averaged 3.4 offensive rebounds per-40 minutes pace adjusted on the season, making a number of hustle plays imposing his size throughout the year, but was a force in that regard at the junior level and could be capable of more.

Zubac's most impressive skill offensively, and the one most relevant to the role he seems likely to play in the NBA early on, is likely his ability to utilize his physical tools around the rim. Combining impressive mobility with great hands and soft touch, Zubac is a reliable target for his guards to throw the ball to, and shot a 63% around the rim in the half court this season according to Synergy Sports Technology. Able to dunk the ball with little effort thanks to his huge standing reach, Zubac also converts half hooks and quick flips over the defense at a decent rate, having little trouble getting off shots inside thanks to his size.

His misses this season frequently came when defenders were able to get into his body and legs when he elevated to score, and he figures to have room to grow as a scorer around the rim as he works towards maxing out his frame and athleticism and gains experience against quality competition.

In the post, Zubac uses solid footwork to score off of quick spins, step-throughs, and up-and-unders. He leaves some shots short and rushes things a bit at times, but has a budding arsenal of back to the basket moves that could allow him to create a bit of offense for himself down the line, particularly when considering his natural scoring instincts.

Away from the rim, the 19 year old center is relatively limited at this stage. He isn't the kind of big man who initiates much offense or is asked to make decisions with the ball as a passer. He's a solid free throw shooter (career 69%), but doesn't attempt many shots outside of the paint, although he shows some touch on turnaround jumpers from the post and seems to have some potential as a midrange threat down the road.

Potential defines Zubac's outlook at this stage more than perhaps any of the other early entrant international big men jockeying for position at the end of the first round. He has a strong foundation of tools that leave room for optimism in a number of facets of the game offensively, but isn't overly polished in any one area at the moment and lacks a degree of high level experience given how little high level basketball he's played up until this point.


Zubac's potential defensively isn't quite as exciting. He's not a great shot blocker or rebounder despite his size, as his lack of explosiveness limits him against high level competition. Zubac shows the ability to move his feet fairly well at times guarding the midrange, but generally appears limited defending away from the rim, which coupled with his lack of seasoning on this end, proved particularly problematic in the pick and roll.

Experience should help him clean up some of his mental lapses, and hopefully help him improve as a defensive rebounder. His sheer size figures to be an asset when he's contesting shots around the rim, but there are question marks about the type of paint protector he can be early on in his career, unless his awareness and physicality improves significantly with added coaching.

It has been a wild 10 months for Ivica Zubac who emerged as a prospect and missed much of the season to injury and contractual issues, yet still figures to be in play for teams selecting in the first round. A hard worker who speaks good English and wishes to come to the NBA as soon as he can, the young Croatian figures to have an easier time making the leap across the Atlantic should he leave his name in the draft, as he has very friendly NBA outs in his new contract. Though he may be early in his development as a pro, the potential is obviously there for the big man to grow into a contributor down the road. Whether he stays in this draft or not, Zubac is a prospect worth keeping an eye on in the coming years.
Read full article

Strengths:
-Great size at 7-0
-Strong frame
-Above average athlete for a player his size
-Can play above the rim. Catches lob passes. Can finish impressively off two feet
-Soft, reliable hands. Catches everything
-Moves off the ball well. Knows how to present himself around the rim
-Great touch around the basket
-Shows some ability to score with back to the basket. Uses strength to back down weaker players
-Solid footwork in the low post. Can utilize some spin moves and score with hook shots
-Good feel for the game. Can find open man. Passes out of double teams.
-Active on offensive glass
-Shows some nice mobility defensively. Can cover ground

Weaknesses:
-Good athlete overall, but is not incredibly explosive
-Late bloomer who is somewhat unpolished
-Made just 59% of free throw attempts at U19s
-Not a great rim protector (1.3 per-40)
-Not a great defensive rebounder
-Lacks some experience on defense, particularly in pick and roll situations. Somewhat upright in stance

Very limited stepping outside of the paint defensively on pick and roll. Not a great athlete.

Outlook: Big, strong, competitive big man who had a phenomenal tournament despite being almost completely unknown coming in. Took advantage of injuries and absences on Croatia's roster and ended up posting the #1 PER in the tournament (33.7), scoring 27 points per-40 minutes on an outrageous 72% TS%. Will likely see solid playing time in the Adriatic League next season with Cibona, and be tracked closely by scouts to see how he fares against older players. Had his two worst games of the tournament against the US, even if he still scored a solid 24 points and pulled down 17 rebounds in 56 minutes of action.
Read full article