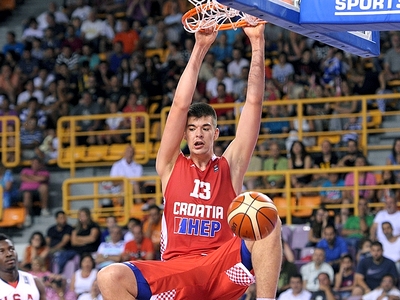 Strengths:
-Great size at 7-0
-Strong frame
-Above average athlete for a player his size
-Can play above the rim. Catches lob passes. Can finish impressively off two feet
-Soft, reliable hands. Catches everything
-Moves off the ball well. Knows how to present himself around the rim
-Great touch around the basket
-Shows some ability to score with back to the basket. Uses strength to back down weaker players
-Solid footwork in the low post. Can utilize some spin moves and score with hook shots
-Good feel for the game. Can find open man. Passes out of double teams.
-Active on offensive glass
-Shows some nice mobility defensively. Can cover ground

Weaknesses:
-Good athlete overall, but is not incredibly explosive
-Late bloomer who is somewhat unpolished
-Made just 59% of free throw attempts at U19s
-Not a great rim protector (1.3 per-40)
-Not a great defensive rebounder
-Lacks some experience on defense, particularly in pick and roll situations. Somewhat upright in stance

Very limited stepping outside of the paint defensively on pick and roll. Not a great athlete.

Outlook: Big, strong, competitive big man who had a phenomenal tournament despite being almost completely unknown coming in. Took advantage of injuries and absences on Croatia's roster and ended up posting the #1 PER in the tournament (33.7), scoring 27 points per-40 minutes on an outrageous 72% TS%. Will likely see solid playing time in the Adriatic League next season with Cibona, and be tracked closely by scouts to see how he fares against older players. Had his two worst games of the tournament against the US, even if he still scored a solid 24 points and pulled down 17 rebounds in 56 minutes of action.

Strengths:
-Big enough to play center at over 6-10 in shoes with a 7-2 ½ wingspan and a 9-1 ½ standing reach
-Tremendous frame. 246 pounds and should be able to add even more strength in time
-Light on his feet. Moves very well for a player his size
-Excellent finisher around the basket
-Outstanding offensive rebounder. 6.2 per-40 at U19s, 4.4 as a college freshman at Louisville
-Gets hands on tons of loose balls
-Gets in passing lanes impressive with combination of length and mobility. 3.5 steals per-40 at U19s, 1.7 per-40 at Louisville
-Can step out on the perimeter defensively and not look out of place
-Rotates impressively for blocks. 3rd best shot-blocker at U19s per-minute
-Moves feet very well defensively
-Was one of the youngest freshmen in college basketball. Turned 18 just two weeks before his first game at Louisville. Doesn't turn 19 until November.

Weaknesses:
-An inch shorter than you might hope for a NBA center
-Offensive skill-level a work in progress.
-Averaged just 6.6 points per-40 as a freshman. 11.1 at U19s
-Doesn't have any real footwork inside the paint or go-to moves. All of his offense comes on finishes and offensive rebounds
-Not a great passer
-Struggles badly from free throw line. Made 47% of attempts as a freshman. Up to 60% from line at U19s, shooting granny style
-Played hard at U19s in limited role, but has a reputation for being somewhat up and down with his intensity level at times
-Average defensive rebounder. 5.9 per-40 at U19s, 5.8 per-40 at Louisville

Outlook: Looked to be in much better shape physically here than he was as a freshman at Louisville. Played a major role defensively for USA, and was a constant presence on the offensive glass. Could easily be going into his freshman season at Louisville as he is yet to turn 19 years old. A sure-fire NBA guy if he plays with the same intensity he did in Crete on a consistent basis. Likely to step into a significant role as a sophomore with Montrezl Harrell off to the NBA.

Strengths:
-Great size for a center at 7-1
-Strong frame that isn't toned at the moment but has nice potential to fill out
-Very long arms
-Soft reliable hands
-Relatively mobile big man. Can elevate around the basket off two feet
-Good form on mid-range jumper
-Made 70% of free throw attempts at U19s
-Great target on pick and roll with size, length, soft hands and ability to elevate. Finishes around the rim with space
-Can score with a hook shot
-Brings legit rim-protection ability with his size and length. 5 blocks per-40 at U19s. 2nd best at tournament
-Excellent defensive rebounder when motivated. 12 defensive rebounds per-40 at U19s. Career 8.3
-Speaks good English.

Weaknesses:
-Conditioning is average. Struggles to play more than 5-6 minutes consecutively
-Needs to continue to tone frame
-Intensity level often leaves something to be desired
-Jogs up and down the court. Doesn't always get back on defense
-Offensive skill-level still a work in progress. Footwork is average. Lacks patience with back to the basket. Not aggressive or skilled enough to assert his will on opponents. Gets pushed around
-Lacks a degree of toughness
-Career 50% 2P%. Very disappointing number for a player his size against other guys his age

Outlook: Talented, old school big man who has been very productive at every level he's played at. Excellent rim protector with size, length and nice timing. Also a consistent offensive rebounder. Some concerns about his motor and competitiveness. Doesn't always look like he's operating at full speed. Flirted long and hard with the NCAA before electing to stay in Greece at Panathinaikos.

Weaknesses:
-Very limited offensively. Shot just 43% from 2-point range
-Not particularly explosive
-Doesn't run the floor very well
-Struggles to finish around the basket in traffic
-Doesn't love contact inside the paint
-Struggles to finish with touch and feel when presented with opposition inside the paint. Tends to just throws ball up on rim and hope for best
-Limited footwork
-Feel for game offensively is a work in progress. Not a great passer
-Intensity level comes and goes at times

Outlook: Goes by Bebo. Had an intriguing tournament in Dubai last summer playing up at the U17s. Again played up by a few years at the U19s, and had some nice moments as a rebounder and shot-blocker. Struggled against better competition but was productive per-minute overall. Somewhat stuck between the 4 and the 5. Needs to continue to grow and improve his athleticism to stay interesting for the highest levels. Timing as a shot-blocker/rebounder gives him a chance.

Strengths:
-Excellent frame that should fill out nicely in time
-Very long arms. Big hands
-Very good athlete. Quick off feet
-Solid offensive rebounder
-Reliable hands
-Can finish impressively off two feet
-Uses both hands around the basket
-Provides some rim protection with physical tools
-Shows some ability to switch on the perimeter defensively
-Only born in 1998. Played up by two years at U19s

Weaknesses:
-Thin upper body that will take time to fill out
-Lack of strength affects him significantly on both ends of the floor
-Feel for game, experience level still a work in progress
-Limited player offensively
-Inconsistent from game to game still. Production isn't always there.

Outlook: Sudanese born big man who emigrated to Australia. Raw, but physically gifted. Looks to have made major strides from last year. Competitive. Shows some intriguing flashes offensively. Will be interesting to see how he continues to develop.

Weaknesses:
-Limited offensive player.
-Not an aggressive finisher around the basket. Settles for soft floaters instead of using athleticism inside the paint
-Lacks a degree of toughness and intensity
-Doesn't have any post moves
-Ugly shooting stroke
-Gets posted up inside and doesn't always show enough fight
-Feel for game is average. Little bit of a space cadet

Outlook: Talented, but underachieving big man who hasn't shown much improvement in the last year or two. Has excellent tools with his solid size, big frame and ability to cover ground effortlessly. Has some moments where he looks impressive, but struggles to string together effective plays on both ends of the floor consistently. Does not have a great reputation off the court in Turkey. Still has time to figure things out and reach his potential, but hasn't made great strides as of late.
Read Next...