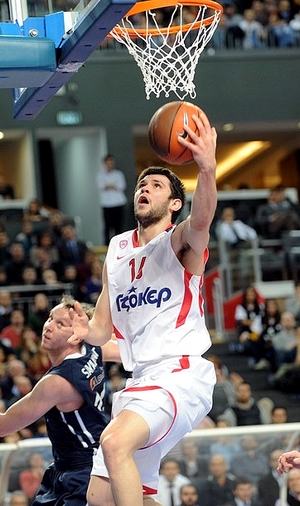 A productive role-player for the Greek National team and European powerhouse Olympiakos, Kostas Papanikolaou has been a steady contributor at the EuroLeague level for two years. After a tremendous showing this past week at the Euroleague Final Four in Istanbul, making all five of his 3-pointers and scoring a Euroleague career-high 18 points in the championship game victory, Papanikolaou's stock has risen to the point that it wouldn't be surprising at all to see a team take a shot on him in the second round on draft night.

An average athlete with an excellent feel for the game, good fundamentals, and terrific maturity, Papanikolaou's profile may not jump off the page on first glance, but his size, defensive prowess, experience and productivity at the highest levels of European basketball make him one of the most intriguing 1990-born international prospects automatically eligible for the 2012 NBA Draft.

Standing 6'8 with a solid frame, Papanikolaou has excellent size for a NBA small forward, though he sees time at both forward spots for the Euroleague champions Olympiacos. He runs the floor with purpose, and is able to play above the rim when he has a head of steam, but is otherwise an average athlete. He isn't explosive from a stand-still and his limited agility makes it difficult for him to create his own shot in one-on-one situations, but his non-stop motor and willingness to initiate contact allow him to make some plays by virtue of his physical tools in the European game.

On the offensive end, Papanikolaou spends most of his time out on the perimeter, even if quite a few of his possessions end at the rim as a result of his off-ball movement. Not a terribly assertive scorer, Papanikolaou functions as a complementary player, seldom forcing the issue and making smart reads playing off his teammates. He's turned the ball over just 30 times so far this year in nearly 1000 minutes, about once for every 40 Euroleague minutes he plays.

Nearly half of Papanikolaou's touches come in spot-up situations according to Synergy Sports Technology, and the lefty has been a sporadic catch and shoot player in recent seasons. He is the definition of a rhythm shooter, seldom making a contested shot or a long jumper that he doesn't simply step into, but he's knocked down 39% of his catch and shoot jumpers this season. Showing a quick release and solid shooting mechanics, he's been a little streaky at times this year, making just 34% of his 3-pointers on the season. Considering how heavily his contributions offensively revolve around this part of his game, he'll need to continue improving his consistency to reach his full potential in the European game or otherwise, but his showing this past weekend at the Final Four was clearly a major and very visible step forward.

Apart from his touches as a spot-up shooter, most of Papanikolaou's shots come right at the rim. He isn't adept at creating his own shot, and is only a decent ball-handler, even if he does occasionally push the ball up the floor himself or beat his man and get to the rim with a straight-line drive. Extremely active off the ball, Papanikolaou proves to be a capable finisher at the rim, using his body well and showing good touch. He struggles to finish over and around athletic shot-blockers, but gets the job done in the paint at this level with timing and smarts, converting 60% of his field goal attempts inside the arc.

Defensively, Papanikolaou is rock solid at the Euroleague level. By no means is he a lock down defender, but he competes every possession, always boxes out, makes some plays in the passing lanes thanks to his anticipation, and does a terrific job pestering his man off the ball. Spending time defending both forward spots, Papaniolaou is better suited to defend the three, as his lack of size and tremendous physical strength can be a challenge for him in the post. His average lateral quickness may render him slightly less effective at the NBA level, but his fundamentals and basketball IQ would surely help him hold his own against better athletes. He's also a solid rebounder, particularly on the offensive end due to his activity level.

One of the most mature and polished players in this year's group of automatically eligible international prospects, Papanikolaou is by no means a glamorous player. He may not be an aggressive enough scorer for certain NBA coaches, but his size, defensive prowess, ability to accept and fill an important role, knack for playing low-mistake basketball, and reputation as a winner at every level he's played at make him one of the most intriguing role-playing prospects available in the second round.
Read full article

1990-born small forward Kostas Papanikolaou is considered one of the great hopes of Greek basketball, and he's seeing some of the most meaningful minutes of any prospect in Europe these days.

A decorated player at the junior level, Papanikolaou has quite a resume underneath his belt already for a 20-year old. He's the leader of a terrific generation of Greek youngsters that won the U-18 European Championships in 2008, the U-20 in 2009 (where he was named MVP) and the Albert Schweitzer Tournament in Mannheim in 2008. He also took silver medals with the Greek national team in 2007 at the U-18 European Championships, in 2009 at the U-19 World Championship in New Zealand (where they lost to the US) and this past summer at the European Under 20's. 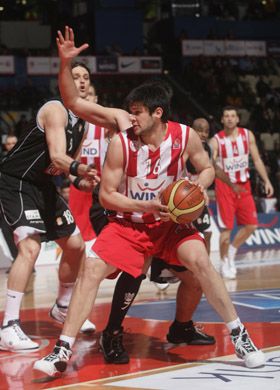 He's already shown himself as one of the top players in his age group at every stage he's played at, and is now continuing that on the senior level by establishing himself as a legit rotation player on a Euroleague Final Four caliber team in Olympiacos.

Papanikolaou stands out more-so with his competitiveness and basketball IQ than with his physical tools. Standing 6-7, with a solid frame, he's a good athlete for Europe but is just average by NBA standards. A decent leaper in space, Papanikolaou is not overwhelmingly quick or explosive, being more likely to wow you with a heady play than with a highlight reel caliber dunk.

Playing on a very talented Olympiacos squad featuring three of the most creative players in Europe in Milos Teodosic, Vassilis Spanoulis and Theo Papaloukas, Papanikolaou is rarely asked to do anything more than wait for opportunities playing off the ball, and not make mistakes. 40% of his offense comes in spot-up situations according to Synergy Sports Technology, with the rest comprising of cuts to the basket, running the floor in transition, and offensive rebounds.

Although often acting as a floor-spacer while parked in the corner, Papanikolaou is not a very consistent shooter at this point in time, even if he's made strides in this area as of late. Strictly a flat-footed catch and shoot player, he shows a slow release and somewhat unorthodox mechanics like many left-handers do, knocking down 8 of his 24 3-point attempts in 16 games this season. Continuing to develop this part of his game will play a major role in how he's perceived in the future.

As a shot-creator, Papanikolaou is somewhat limited. He rarely puts the ball on the floor, and when doing so, is very left hand-dominant and mostly a straight-line dribbler. He does show very good court vision, though, making quick decisions on the fly and looking more than willing to make the extra pass. He's a very mature, fundamentally sound player who understands his role and rarely makes mistakes, which is why he's been able to earn playing time this season on an Olympiacos-team that has seemingly never had any patience for developing young players.

Defensively, he's a very effective player at the European level, as he has good size, smarts and maturity and brings a major effort in every moment he's on the court. His instincts on this end are very intriguing, as you'll regularly see him getting in the passing lanes for steals and was always one of the top shot-blockers in all of the youth competitions he played in. He does an excellent job of knowing when to leak out in transition and will get himself some easy baskets at times by just running the floor harder than anyone else.

From an NBA standpoint, Papanikolaou doesn't quite fit the mold of what teams usually look for in European prospects. His average athleticism, ball-handling and perimeter shooting skills are all significant factors working against him, and there are question marks about whether he has the lateral quickness to guard his position (probably small forward) effectively in the NBA.

Additionally, the team that owns his rights, Olympiacos, paid a mammoth 700,000 Euro buyout to secure his rights from fellow Greek team Aris Thessaloniki, so it's not so clear how quick they will be to let him go. If the NBA does become an option for him down the road (likely after being picked when he's automatically eligible in 2012 and then stashed), he'll have to choose between being a marginal role player in the US versus being a very well compensated leading player in his home country. The track record of Greek players in the NBA is virtually nil, and for good reason.

Regardless, Papanikolaou is a player that NBA teams will want to keep an eye on, as he's proven to be a winner at every level he's played at, and has the type of smarts and competitiveness that playoff-bound coaches covet. He'll have to continue to improve his shooting, but someone could look at him and envision him developing into somewhat of a cross between Luke Walton and Omri Casspi. That alone could make him a decent gamble for a team picking in the second round.
Read full article

Luis Fernández
@DraftExpress
One of the most intriguing players on the Greek squad was Kostas Papanikolaou. Whenever he was forced to play power forward in Mannheim due the lack of size of his national team, the arrival of Sarikopoulos regularly moved him to the small forward position. The upside, he proved to be able to play on the perimeter and he did a bit of everything: shooting, rebounding, passing and even slashing; the guy is talented and shows nice basketball IQ. The downside, playing as a four did help him to operate more comfortably on court, particularly with his face-up game, to take opponents off the dribble or punish them with his jumper when they weren't aggressive enough defending the perimeter. Besides, his defense against quick small forwards looked questionable, as his lateral mobility isn't the best around.
Read full article

Luis Fernández
@DraftExpress
The backcourt duo became a lethal triangle when including Kostas Papanikolaou, a promisingly-built 6-7 (perhaps in his way to 6-8) forward that played as a face-up power forward due the size limitations of the Greek team, but who showed clear small forward potential. Nicely athletic, Papanikolaou is another lefty, indeed a bit too left-handed, who showed a solid spot-up jumper with range out to the three-point line, solid ball-handling skills, excellent footwork on penetrations even to perform reverse moves, and great activity on defense. Indeed he might be the guy with the most potential on the Greek team.
Read full article