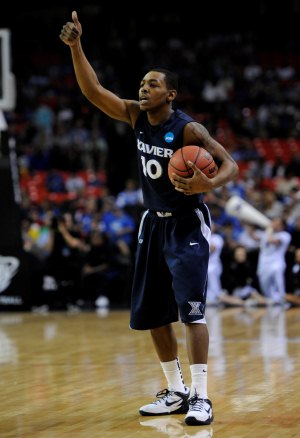 A transfer from Xavier immediately eligible to play at Arizona this season, Mark Lyons has gone from forming one of the most explosive offensive backcourts in college basketball with Tu Holloway to leading an Arizona squad adding a surplus of talented underclassmen that desperately needs a leader at the point guard position. Stepping into a role tailor made to what he needs to show to improve his draft stock, Lyons has a golden opportunity to lead his team deep into the NCAA Tournament and improve his NBA Draft stock this season.

Leaving the Xavier program after a tumultuous but mostly successful season, Lyons immediately fills the void at the point guard position for the Wildcats. Standing 6'1 with a 6'4 wingspan and a 190-pound frame, the 5th year senior is a scoring point guard who showed the ability handle defensive pressure, run the pick and roll, and break down defenders one-on-one splitting point guard duties for stretches with Tu Holloway as a junior.

The less natural passer of the two, Lyons will be looked upon to set the table for Arizona's extremely gifted group of incoming big men, including the likes of Kaleb Tarczewski, Grant Jarrett, and Brandon Ashley. Averaging just 3.4 assists per-40 minutes pace adjusted last season while spending plenty of time off the ball, Lyons has the quickness to turn the corner, NBA-level speed, and the ball-handling ability to distort defenses, the question is: can he find the proper balance between scoring and passing to help the Wildcats reach their potential this season?

At Xavier, Lyons showed some potential as a distributor, but was mainly looking for his own offense, even when Holloway was off the floor. Lyons certainly has the athleticism to create, but the onus will be on him to take fewer tough shots in the paint, make the easy plays, and use his penetration, especially on the pick and roll, to make his teammates better.

Lyon's scoring should also come in handy this season and will remain a big part of his value proposition at the next level regardless of how he fares running his new team. An extremely aggressive penetrator, the Brewster Academy product's shot attempts are distributed fairly evenly from the inside and outside. He uses hesitation moves and quick bursts of speed to get an edge and get in the paint, but makes less than stellar decisions at the point of attack at times. Getting tunnel vision to the rim and sometimes driving right into the teeth of the defense or getting stripped before getting a chance to elevate, Lyons shot an unspectacular 45.9% at the rim last season according to Synergy Sports Technology.

Away from the basket, Lyons was relatively more efficient. He's a good set shooter, knocking down 41% of his catch and shoot jump shots, and is also a threat pulling-up off the dribble. Making a third of his jump shots off the dribble, Lyons was ambitious with his shot selection at times last year. If he can pick and choose his spots more consistently, he can improve his efficiency as a scorer this season in his new role.

Defensively, Lyons is active with his hands and proves to be a good rebounder for his position, but does not always make the most of his tools. When he gets down in a stance and commits himself on the defensive end, he can be a pest, but he looks lackadaisical at times. A bit part of Lyons' leadership ability will become clear in how he sets the tone for his team defensively this season.

Mark Lyons gets to redefine himself as a player in a situation that should align exceptionally with what he needs to show NBA scouts to improve his stock this season. If he can improve as a distributor, make an impact defensively, and shows leadership potential off the floor, he's going to help Arizona win a lot of games and would surely climb our senior rankings.
Read full article