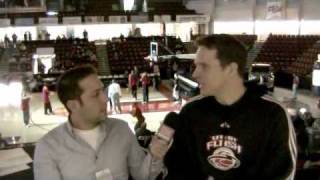 Richard Walker
@DraftExpress
Utah Flash coach Mark Madsen sits down to discuss the transition he made from high paid NBA player to D-League assistant, the process of instilling the toughness and hustle he was known for in his own pupils, his thoughts on Dontell Jefferson, Anthony Tolliver and other players he's seen and worked with, and more.

Matt Williams
@DraftExpress
Overview: A defensive role player who doesnt bring much to the table in terms of skills, but is a notoriously hard working hustle guy. A bit undersized for a power forward. Very strong, but not quick, fast, or explosive. Used to be a rotational player back when he was in the Lakers, but racks up a lot of DNPs these days. Production has dropped to virtually nil over the past few years--.5 points per game, 16% from the field, 25% from the free throw line at last check. Wont have any impact offensively, but can get an occasional garbage basket once every couple of weeks. Makes a living by going after every loose ball and being physical defensively. Always good for six fouls and a lot jockeying for position on the block. Has been a bruiser since his days at Stanford. Had a productive four year career for the Cardinals, rebounding at a high rate. Selected with the last pick in the first round. Was a very good role player early in his career. Works as hard as any player in the game when hes on the floor. Will suffer a lot of minor injuries because of that. Brings a lot to the locker room; a great teammate. Has a fairly inflated contract relative to his production but could be used as a bargaining chip in a trade before it expires in 2010.

Offense: A veritable garbage man on the offensive end. Gets almost all of his touches by virtue of his work ethic. Anything he gets on the offensive end is great because hes not expected to provide much production if any. Takes essentially no jump shots. Looks incredibly uncomfortable when he does. Lacks the fluidity to be a catch and shoot threat. Does all of his damage at the rim. Moves relentlessly without the ball. Sets more screens per minute than probably any player in the NBA. Constantly trying to help his teammates get open. Always cutting and being active. Will get some easy looks when he ducks in. Crashes the offensive glass with reckless abandon. Will get called for loose ball fouls and over the backs, but he provides energy. Loves to fight for position and initiate contact. Goes to the line at a good rate, but shoots an awful percentage. Wont put the ball on the floor to score. Gets essentially no touches in the flow of the offense. Takes very few shots in general. Tries to do all the little things. Not much of an asset on any team that isnt littered with scorers.

Defense: A defensive stalwart who leaves it all on the court. Commits a lot of fouls, but that is the result of the intensity and aggressiveness with which he plays. Fights for position as hard as any player in the game. Always trying to deny the ball. Does a decent job defending the post, and uses leverage extremely well to force his man off balance after making a move. Will get a hand up and swipe at the ball, but isnt going to block many shots. Runs hard to get back on defense and shows some lateral quickness. Will hedge screens and work hard to close out shooters. Will get beaten off the dribble due to his lack of recovery speed. Gets minutes for his tireless work ethic and his ability to wear out opposing offensive players while the starters get a rest. Wont force many turnovers or grab many rebounds due to his physical limitations. Not the most athletic defender by any means, but gets a lot out of what he has.
Read full article