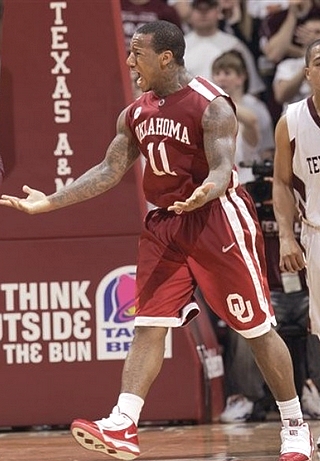 One of the first of many surprise early-entry declarations this spring, Tommy Mason-Griffin made a risky career move by electing to leave school after his freshman season and sign with an NFL agent (Major Adamsagent of fellow Houston native Vince Young) who has never represented an NBA player.

Mason-Griffin had a decent freshman year in terms of personal productivity, but the poor performance of the Sooners frames his season in a different light. Despite scoring 14.1 points per game and dishing out five assists per contest, Mason-Griffin is far from a lock to be drafted. He will have a lot to prove throughout the draft process.

Many of the doubts concerning Mason-Griffins NBA potential stem from his physical attributes. Standing 5-11 with a pudgy build, the Madison (TX) product is undersized and doesnt compensate with a big wingspan or extraordinary athleticism. He has a solid first step, but Mason-Griffins lack of leaping ability makes it difficult for him to make plays in the lane. He has carried unnecessary weight on his frame throughout his career, and while his scoring instincts are unquestioned, his ability to translate them to the next level will be limited by his below average physical tools.

Though the Texas native certainly has his limitations from a physical standpoint, he also has some impressive assets offensively. With 83% of his shots coming from the perimeter, Mason-Griffin is a highly capable jump shooter. He displays solid footwork and has the ability to make difficult shots off the bounce.

Connecting at a good rate off the catch, he was even better off the dribble, finishing the season as one of the most prolific pull-up shooters in all of college basketball. The freshman had some huge games offensively, including two games of more than 30 points and five games of more than 20 points. He made 40% of his jumpers and 42% of his threes.

Despite his merits as a scorer, Mason-Griffins approach on the offensive end leaves a lot to be desired. He had 11 games where he didnt score in double figures, likely because of his inability to finish or drive right. The highly-touted recruit made just 37.7% of his two-point attemptsranking him among the worst in that category in college basketball  and he lacks the leaping ability to compensate for his height in the lane. A competent scorer while shooting off the dribble, Mason-Griffin is substantially more effective when he goes left.

His inconsistency on the offensive end also has a lot to do with his shot selection. He is extremely aggressive in one-on-one situations, and shows a knack for creating space to get his shot off with quick crossovers and hesitation moves, but Mason-Griffin gets a bit trigger happy from the perimeter. Mason-Griffin is typically in score-first mode when he gets the ball, taking off-balance jumpers and never hesitating to create his own shot.

He is more than capable of handling pressure and using his body to shield the ball, which makes Mason-Griffin an impressive, but often over-aggressive, ball-handler. Though hes capable of creating shots for his teammates in drive-and-dish situations, most of his assists this season came off of relatively simple passes to open teammates, since he was looking for his shot when he put the ball on the floor. Mason-Griffin isnt a playmaker in the purest sense, but he does a nice job finding the open man in transition or when he simply cant create enough separation to get his own shot off.

The majority of his turnovers came from getting too aggressive and trying to break down multiple defenders on the perimeter. His ability to improve as a creator will be a key part of his stock. He's at times willing to give the ball up to the open man, but appears to prefer going one-on-one and trying to score himself.

Defensively, Mason-Griffin doesnt have the tools to make a dynamic impact and could be a liability at the NBA level. His lack of length limits his ability to contest shots and force turnovers. Though he shows good lateral quickness in spurts, his short strides hurt his ability to recover once his man gets a step on him. In one-on-one situations, hes able to keep up with his mans first move, but has a hard time denying penetration against players capable of stringing multiple moves together.

Though Mason-Griffins ability to score certainly deserves recognition, his lack of finishing ability, underdeveloped playmaking skills and below average physical tools, and his decision to leave school early are questionable at best. There simply arent many players in his mold playing prominent roles in the NBA, and most of them came into the League far more ready to contribute than Mason-Griffin is right now.

While this draft class lacks depth at point guard, Mason-Griffin will be competing with an array of more experienced and more talented guards for draft position in workouts. He is likely 2-3 years away from developing into, at best, a backup point guard, which could make it difficult to justify spending a draft pick and/or roster spot on him when there are equally talented, but far more ready players available in the D-League or overseas.

When it's all said and done, Mason-Griffin might realize that being patient and sticking it out with a player's coach like Jeff Capel at Oklahoma was likely his best option at the time.
Read full article

Richard Walker
@DraftExpress
Tommy Mason-Griffin (#24 Scout, #66 Rivals, #37 ESPN) looks like a very nice get for Jeff Capel and Oklahoma, as hes a speedy point guard with excellent ball-handling skills, very nice change of pace ability, and terrific overall talent. He displayed the raw ability to hit tough shots or find the open man off the dribble, but definitely seemed to be forcing the issue at times, showing a real wild side that Capel will have to harness over the next few years.

Mason-Griffin obviously has great instincts, but he needs to work on his fundamentals in a major way, as he often looks far more interested in making the spectacular play rather than trying to just play good basketball. He ran into brick walls numerous times over the course of the week trying to make fancy streetball style moves, and really showed no conscious whatsoever hoisting up terrible contested shots from the perimeter. At his diminutive size (he looks no more than 5-10 at best) hes going to have to become a pure point guard and learn how to get his shot off in an efficient manner against much bigger guards than hes faced in high school if hes to have any chance at playing at the highest level. Defensively, his height will always be a major hindrance as well.
Read full article

Jonathan Givony
@DraftExpress
Gallons running mate at Oak Hill next year will be diminutive point guard Tommy Mason-Griffin (#42 Scout, #72 Rivals, #22 ESPN), a guy who has been shooting up the recruiting rankings as of late. Mason-Griffin is a small, quick and very talented scoring point guard, showing great ball-handling skills, really nice hesitation moves to get by defenders, and the ability to change speeds and create offense exceptionally well for both himself and others, particularly in transition. He has a very nice stroke from the perimeter as well, good range on his jumper, and the ability to pull-up off the bounce, making him a lethal scorer when he gets hot. Mason-Griffin is more of a scorer than a playmaker at this point in time, but he has apparently improved on that aspect of his game. Considering his lack of size (the 5-11 hes listed at may be a stretch) he will probably have to develop pretty much impeccably over his college career to emerge as a serious draft prospect, which means improving his ability to run a team and also become a much better defender.
Read full article