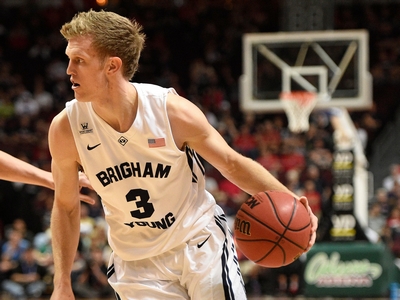 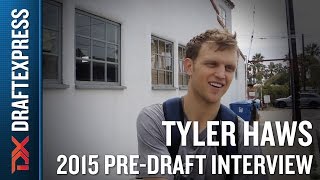 DraftExpress
@DraftExpress
Discussing a variety of topics with Tyler Haws in Santa Barbara, including what he's working on on and off the court, his time at BYU, and how he's looking forward toward the pre-draft process. 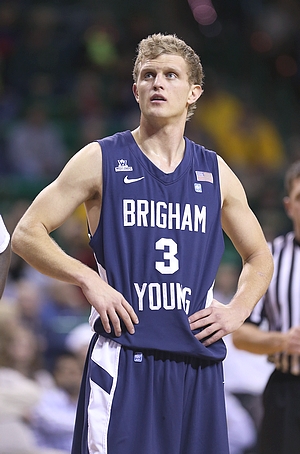 A two time Mr. Utah Basketball winner and fringe top-150 recruit in the class of 2009 coming out of perennial power Lone Peak HS (UT), Tyler Haws committed to BYU in lieu of a number of quality BCS offers. The third leading scorer on a 2010 BYU team that won 30 games as a freshman, Haws spent the subsequent two years serving a LDS mission in the Philippines. Returning to Provo last season, he immediately emerged as the team's top option and leading scorer as a 21 year old sophomore, averaging 21.7 points per-game and earning a spot on the All-WCC first team for his efforts.

Standing 6'5 with average length and an average frame, Haws possesses decent size for a shooting guard. A middle-of-the-road athlete at the college level, Haws has good quickness and plays with a great motor, but isn't very explosiveness and doesn't have ideal physical tools for a NBA player.

Offensively, Haws more than compensates for his lack of elite athleticism at the college level with a well-rounded offensive game. Scoring an impressive 23.4 points per-40 minutes pace-adjusted last season, second best in the WCC after Kelly Olynyk, Haws did a little bit of everything for BYU last season.

Doing the majority of his damage with his jump shot in the half-court, Haws is a terrific shooter. He's a reliable set shooter with a quick release. While his 38% from beyond the arc on 3.1 attempts per-game is impressive, it is his ability to turn on a dime and hit a shot working off a screen, dribble to space and hit a 15-footer under duress, and hit shots consistently after a rip through or jab that makes him so prolific at the college level. Knocking down a phenomenal 53% of his jump shots inside of 17 feet, Haws is a difficult player to guard at the college level due to the variety and efficiency of his midrange game. He's so effective from that range that he gets a couple of post touches per-game, utilizing a turnaround jumper to score one-on-one.

When Haws attacks the rim, he does so with purpose, finishing at a respectable 59% rate and getting to the line for six free throw attempts per-game. An opportunistic cutter and finisher in transition, he isn't a threat to make a highlight reel play at the rim, but has a reliable floater, will use his body to shield the ball and isn't tentative to attack defenders, even if his lack of explosiveness makes it difficult for him to convert at times.

Seldom running the pick and roll or operating one-on-one, Haws plays a fairly unique role for a player who scores as much as he does, as he spends very little time creating shots for himself or others off the dribble. The focal point of the Cougars' half court sets, his role is predicated in working through the Cougars half court sets, finding space, and making quick decisions with the ball from the midrange. This is a major departure from the role of the Jimmer Fredette, who saw nearly 50% of his possessions in isolation or pick and roll situations as a senior.

Defensively, Haws plays with solid energy and can hold his own by virtue of his tenacity, but is a step slow closing out and denying dribble penetration at times. His ability to defend his position at the next level is a question mark, as his physical limitations are a concern on this end of the floor.

Heading into his junior season, Haws is one of the more unique players in college basketball. Two years older than many of his peers, he's a highly productive scorer in an extremely structured system that plays to his strengths as a midrange scorer. Though he doesn't fit the tradition profile of a NBA shooting guard, his productivity is hard to ignore, and there's little doubt that he will get looks from teams by the time he's finished at BYU.
Read full article