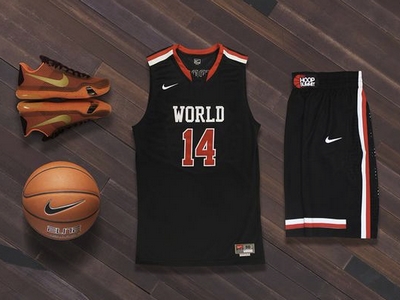 Mike Schmitz
@Mike_Schmitz
The Nike Hoop Summit World Select Team rolled the ball out for the first time on Monday and Tuesday in preparation for its highly anticipated matchup with Team USA on Saturday at the Moda Center in Portland.More DX Nike Hoop Summit Coverage
-World Select Team Measurements and Analysis
-2015 Nike Hoop Summit International Roster BreakdownNow on his fifth Hoop Summit, head Coach Roy Rana has the challenge of turning a roster featuring players from nine different countries with contrasting backgrounds into one cohesive unit.

The World Team has no shortage of size, length, and athleticism, sporting a roster with three 7-footers and eight players with a 6' 11 wingspan or greater. Rana's squad has talent and balance, but the key is getting the best out of each and every player in a nerve-wracking environment with eyes from every NBA team in attendance.

The nerves and lack of familiarity with each other was clear at times on Tuesday, as turnovers came in bunches and sloppy play was the norm. As the week progresses the World Team will have to adapt to a more free-flowing style of play that encourages playing with pace and shooting open looks with confidencewhich is often very different than what these players are used to with their club teams.

Rana worked to instill that mindset on Tuesday when FC Barcelona's Stefan Peno turned down an open three from the top of the key. Rana blew his whistle and yelled, Shoot the ****ing ball. The World Team most certainly has the physical tools and talent to avenge last year's lost to Team USA, it's just a matter of getting used to a new style of play and gelling as a unit.

The World Team worked toward that goal on Monday and Tuesday in the Blazers Practice facility, focusing on everything from skill work to defensive concepts to 5-on-5 sets.

-Split up into two groups, the bigs and the smalls, for skill work. The smalls included Federico Mussini, George Lucas, Jamal Murray, Stefan Peno, Nedim Buza, while the bigs group was made up of Thon Maker, Skal Labissiere, Cheick Diallo, Tai Wynyard, and Zhou Qi. The bigs worked on mid-range jumpers, attacking from the high post with an emphasis on footwork, and picking and popping to space and slashing to the basket. The guards focused on off the dribble shooting, mixing in different combo moves while working on footwork.
-10-minute dynamic warm-up
-Three-man shell drill
-5-on-5 half court defensive stops game with the defense working to get three stops in a row (two-dribble maximum for each offensive player
-Spot shooting in pairs at different baskets
- Four on four shell drill that turned into live four on four with an emphasis on executing and defending the side pick and roll
-Split into bigs and smalls for skill work. More elbow flash drives for the bigs and corner shooting for the smalls.
-5-on-0 sets in the half court
-5-on-5 full court

-Split into bigs and smalls for skill work. Bigs focused on post moves while the guards worked on pick and roll finishes
-10-minute dynamic warm-up
-5-on-5 shell drill
-5-on-0 sets in the half court
-5-on-5 half court stops game: Wynyard, Lucas, Labissiere, Ben Simmons and Peno vs Mussini, Murray, Buza, Maker and Diallo.
-Four 10-minute, full court 5-on-5 sessions

Skal Labissiere: The Kentucky-bound 7-footer and #1 prospect in our 2016 Mock Draft turned heads as soon as the ball rolled out on Monday afternoon with his size, developing body, athleticism and smooth shooting stroke. The Haitian big man gave NBA scouts and executives a glimpse of his monster potential in the 5-on-5 sessions on Tuesday. Labissiere showcased his rare blend of size, athleticism and shooting ability by making plays at the rim on both ends, while knocking down a post turnaround over Maker's 7-3 wingspan and drilling a pick and pop jumper with his smooth, high release. Labissiere wasn't perfect, but his potential as a two-way, versatile big man who can score inside and out was most certainly on display. The 7-foot, 216-pound athlete figures to be a handful for Team USA on both ends of the floor.

Federico Mussini: He may not pass the eye test at 6' 1with a 6' 2 wingspan and a 154-pound frame, but the Italian was the most polished guard on the floor on Monday and Tuesday and will undoubtedly play an important role as a floor general and shot maker against Team USA. Mussini put on a shooting clinic on Day 1, drilling spot three after spot three during skill sessions, showing how deadly he can be with his feet set. After shooting lights out on Monday, the 1996-born Reggio Emilia guard carved up opponents on Tuesday with his advanced ball handling and crafty finishing around the rim. Mussini hit Maker with a nice behind the back feed out of the pick and roll, finished with his off hand on the right side in traffic, and sliced through the defense with the help of a ball screen and finished a tough And 1. While his ceiling is limited by his physical profile, Mussini has some serious game and will be leaned upon against a guard-heavy USA team.

-7' 2 lanky big man Zhou Qi left practice on Monday after injuring what appeared to be his ankle in 5-on-5 play. Qi wasn't in attendance on Tuesday but the injury isn't expected to keep him out long. Prior to the injury Qi generated some buzz inside of the Blazers practice facility with his 7' 6.5 wingspan, mobility and smooth shooting stroke.

-The youngest player on the World Team, Tai Wynyard, got hit hard in the midsection during the fourth 5-on-5 session on Tuesday, and stayed on the ground for quite some time. The injury wasn't serious, however, as the Kiwi had the wind knocked out of him and cramped up. The Kentucky-bound, high-motor bruiser will be back practicing on Wednesday.

-After missing Monday's practice due to travel, Australian sensation Ben Simmons arrived and practiced in full on Tuesday. Simmons will continue to carve out his role with the World Team as the week progresses, as he was almost certainly hampered by jetlag and struggled with turnovers.
Read Next...