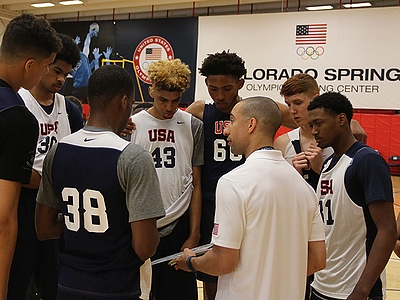 Mike Schmitz
@Mike_Schmitz
A look at four of the most intriguing point guard prospects in attendance at the USA Basketball U18 Training Camp, including scouting reports and video interviews.

Strengths
-Has a pretty strong frame that should fill out
-Big time floor general. Excellent court vision and timing. Uses both sides of the court. Already has an advanced understanding of how to operate on the pick and roll.
-Unselfish player who loves to get teammates easy baskets. Pushes the ball ahead in transition with the pass or the dribble
-Has a low and tight handle that he can use to probe the defense
-Not exceptionally athletic, but has really nice ability to change speeds and keep defenders off balance with pace and body control.
-Has a lot of wiggle to his game that helps him create off the bounce, even without a screen
-Finds ways to score occasionally around the rim with craftiness and touch, using either hand. Doesn't mind contact, despite his lack of size
-Shows some touch operating in the mid-range. Has good mechanics and a quick release on his pull-ups
-Can make a 3-pointer. Shooting 37% for 3 and 88% from the line in EYBL play this season.
-Can get right up in his opponent defensively when he wants to, moving his feet and putting strong pressure on the ball. Gets in the passing lanes with quick hands
-Tough kid who is not afraid to stick his nose in on either end of the floor
-Great feel for the game.

Weaknesses
-Measured 5'11 without shoes last summer with just a 6'1 wingspan. Very undersized for a NBA point guard prospect. Not freakishly athletic to make up for it
-Not a prolific scorer, even at the AAU level. Looked very focused on finding the open man, which made perfect sense in this setting. Will need to find a better balance between scoring and playmaking as the competition stiffens.
-Lack of size can be somewhat of a hindrance as a scorer inside the arc.
-Can overdribble at times while teammates stand around. Will need to learn to be more efficient with his dribble as his career moves on
-Can defend when he wants to, but shows average intensity in that area at times
-Lack of size and length limits his long-term potential defensively

Outlook Was, in our view, head and shoulders the best point guard on the during the USA Basketball tryouts. College coach's dream. Great combination of toughness, smarts and unselfishness. Plays with confidence and poise. Lack of size limits his upside at the NBA level, but certainly doesn't rule him out depending on how his college career evolves.

Strengths
-Adequate size for a college point guard at 6' 2. Strong 194-pound frame. Big chest allows him to body up on defense and take hits around the rim.
-Creative point guard who makes a concerted effort to get his teammates involved. Likes to move the ball.
-Advanced ball handler. Uses hang dribbles, combo moves and head fakes to get into the paint to score or distribute. Nice blend of scoring and playmaking  23.3 points and 7.7 assists per 40 minutes pace adjusted in 19 games in our database (2015 Nike EYBL, Nike Global Challenge and Jordan Brand All-American).
-Ball-handling skills help make up for his lack of elite burst.
-Very comfortable operating out of ball screens. Can hit the roll man or the opposite wing. Uses both sides of the floor. Plays with good pace.
-Can drive and dish or kick to shooters. Above average court vision.
-Soft touch on his floater. Fairly crafty around the rim.
-Capable shooter, especially off the catch. Gets good rotation. 39.7% from 3-point range on 78 attempts and 81.0 free throw percentage on 63 attempts based on stats from 2015 Nike EYBL, Nike Global Challenge and Jordan Brand All-American.
-Calm and confident demeanor.

Weaknesses
-Average tools for an NBA prospect  6' 2 with a 6' 4 wingspan. Strong, but frame leaves much to be desired. Could stand to tone up his body to maximize his tools.
-Not a great athlete. Relies on change of speeds and deception to get by his man. Not all that explosive around the rim.
-Capable shooter but has a fairly slow and low release. Best when he's set with time and space. Can become a more dynamic pull up shooter.
-Has some craft around the rim  floaters, strong fame  but will have to rely on skill as the level of competition, size and athleticism continues to elevate.
-A bit turnover prone  4.5 per 40 pace adjusted in our database. Plays somewhat of a streetball style at times that leads to high-risk plays.
-Defensive potential is limited by his average tools. Opens up in his stance. Could be peskier as an on ball defender.
-Long-term upside may be limited by his less than stellar physical tools.

Outlook Winston, a Detroit native who will be playing at Michigan State in the fall, impressed with his creativity and playmaking ability. Using an advanced handle and sharp court vision, Winston created open looks for his teammates with regularity, a trend that should continue under head coach Tom Izzo. Winston isn't a readymade NBA prospect at the moment because of some of his physical limitations, but he has a solid foundational skill set, and should be able to play a role during his freshman season. Expect Winston to carve out a productive career with the Spartans that could warrant NBA consideration by the time he's all done in East Lansing.

Outlook The Oak Hill Academy guard has some things that you can't teach. He's a blur with the ball, shifts gears with force and ease, and shows enough playmaking potential to envision him developing into more of a full-time lead guard in time. His fast-twitch athleticism also allows him to play the type of pressure defense that every college coach covets. With that said, Coleman will have to continue to improve his jumper, feel for the game and decision making in order to maximize his potential and play a more consistent brand of basketball. Coleman could develop into a more interesting prospect as the game slows down for him and he finds a more consistent jump shot.

Strengths
-Very advanced with his scoring instincts. Ultra aggressive looking to put the ball in the net
-Has nice speed in the open floor. Shifty guard.
-Will find the open man in drive and dish situations
-Uses change of speeds, crafty ball-handling moves, shot-fakes, strong footwork and excellent timing to create space off the bounce
-Shows nice potential in the pick and roll
-Has great touch on his jump-shot. Can throw the ball in the basket from difficult angles
-Gets in the passing lanes with timing and anticipation skills

Weaknesses
-Lacks great size, length or strength for a point guard prospect. Measured 6'0 in shoes, 160 pounds, with a 6'2 wingspan last summer. Not incredibly explosive to compensate
-Very streaky shooter. Tough shot maker, but lacks the mechanics to be more consistent. Very low release point, often flat-footed. Will get off balance in his lower body. Struggles to create separation from defender with the vantage point he shoots it from, combined with his lack of size
-Very left hand dominant. Struggles when forced to drive or finish with his right
-Lacks the strength or explosiveness to emerge as a high-level scorer inside the paint in the half-court when dealing with traffic.
-Decision making is a work in progress. Will settle for difficult pull-up jumpers even when his initial move is cut off.
-Not always a willing passer. Looking to create for himself first and foremost.

Outlook Top-50 recruit headed to St. John's. Had some nice moments as a scorer and even finding the open man off the bounce, but has a ways to go as a decision maker and outside shooter. Will need to make real strides as a playmaker and defender over the course of his college career to overcome his average physical tools, but does have some natural talent and instincts to work with.
Read Next...