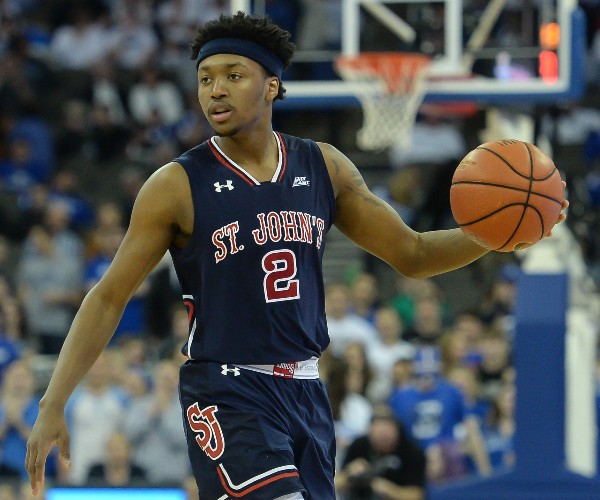 Strengths
-Very advanced with his scoring instincts. Ultra aggressive looking to put the ball in the net
-Has nice speed in the open floor. Shifty guard.
-Will find the open man in drive and dish situations
-Uses change of speeds, crafty ball-handling moves, shot-fakes, strong footwork and excellent timing to create space off the bounce
-Shows nice potential in the pick and roll
-Has great touch on his jump-shot. Can throw the ball in the basket from difficult angles
-Gets in the passing lanes with timing and anticipation skills

Weaknesses
-Lacks great size, length or strength for a point guard prospect. Measured 6'0 in shoes, 160 pounds, with a 6'2 wingspan last summer. Not incredibly explosive to compensate
-Very streaky shooter. Tough shot maker, but lacks the mechanics to be more consistent. Very low release point, often flat-footed. Will get off balance in his lower body. Struggles to create separation from defender with the vantage point he shoots it from, combined with his lack of size
-Very left hand dominant. Struggles when forced to drive or finish with his right
-Lacks the strength or explosiveness to emerge as a high-level scorer inside the paint in the half-court when dealing with traffic.
-Decision making is a work in progress. Will settle for difficult pull-up jumpers even when his initial move is cut off.
-Not always a willing passer. Looking to create for himself first and foremost.

Outlook Top-50 recruit headed to St. John's. Had some nice moments as a scorer and even finding the open man off the bounce, but has a ways to go as a decision maker and outside shooter. Will need to make real strides as a playmaker and defender over the course of his college career to overcome his average physical tools, but does have some natural talent and instincts to work with.
Read full article