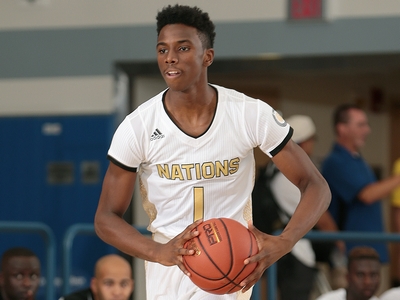 Terrance Ferguson, 6'5, Prime Prep TX, Class of 2016
A detailed report on Ferguson from earlier this summer can be found here

Strengths:
-Very good size for a wing. Not yet physically developed, but has a big frame with a lot of room for growth. Long arms, big hands.
-Led Adidas Nations in PER (31) and points per 40 minutes (33.9)
-Very good athlete who can play above the rim in transition and the half court.
-Prolific in transition. Fills the lanes hard. Really good body control. Uses eurosteps.
-Creative finisher. Shot 67.4% from two on 20.6 attempts per 40 minutes pace adjusted. Doesn't shy away from contact. Gets to the free throw line.
-Long strides. Can straight line attack.
-Tremendous defender. Pressures the ball. Active hands. Makes plays off the ball.
-Plays with extremely high intensity and energy. Emotional player.
-Crashes the offensive glass. Not afraid to throw his body around.
-Moves really well off the ball. Doesn't stand in the corner. Always finds himself around the ball.
-Struggles from the perimeter but mechanics aren't broken. Hasn't had much coaching. Has recently made some tweaks to his shooting that could pay off long term
-Has improved as a passer. Not quite as wild as he's been in the past.

Weaknesses:
-Very limited ball handler. Carries the ball regularly. Struggles to create offense in the half court.
-Not a consistent threat to make shots from the perimeter. Doesn't have great natural touch. Career 16/50 (32%) 3P% in 1100 minutes. 3-pointers make up a very small fraction (14%) of his overall field goal attempts thus far in career
-No pull up game. Uncomfortable taking jump shots off the bounce.
-Right hand dominant, especially around the rim.
-Still has a tendency to get out of control and force up wild shots in the paint. Developing feel and passing ability.
-Room to add weight on his frame but is still fairly thin.

Outlook:
Albeit against some of the lesser teams at the camp, Wesley Da Silva (also called: Wesley Alves Da Silva) was one of the most productive players at Adidas Nations. He hasn't changed all that much since we first evaluated him at the 2014 FIBA Americas in Colorado Springs, but it's hard not to like his combination of physical tools, athleticism, defense, and non-stop motor. It remains to be seen where Da Silva will end up next season (some rumors indicate he may be moving to Spain), but he's without a doubt worth tracking as he continues to work on developing a consistent jumper, filling out his frame and tightening up his ball skills.

Gary Trent, 6'5, Apple Valley MN, Class of 2017
A detailed report on Trent from earlier this summer can be found here

Strengths:
-Undersized for a SG, but has a terrific 6-10 ½ wingspan that allows him to play much bigger than his height
-Frame is underdeveloped (normal for a late-bloomer), but has decently wide shoulders that leaves room for optimism regarding his future physical development
-Tremendous athlete. Great first step. Extremely explosive vertically, either off one, or two feet.
-Extremely difficult to contain when operating downhill. Not just extremely athletic, but also highly aggressive navigating the court with long strides. Always in attack mode.
-Has decent footwork and is developing the ability to change directions with the ball
-Not afraid of contact at the rim. Drives straight into the teeth of the defense. 8.4 free throws per-40 at Nations
-Shows some touch throwing in floaters and pull-ups in the mid-range area
-Terrific potential defensively with combination of length, athleticism and toughness. Really gets after it. Moves feet well
-Late bloomer. Just turned 17. Has a lot of room to continue to improve

Weaknesses:
-Doesn't have great size (6-3 ¼ without shoes) for a shooting guard
-Frame has a long way to go (186 pounds)
-Skill-level is a major work in progress. A terror in transition, but not very effective in the half-court
-Lacks great advanced ball-handling skills. Dribble is high. Struggles to change speeds. Needs to improve off hand.
-Shot just 49% for 2-point range at UAA+Nations this summer
-Doesn't have a great feel for the game. Runs into brick walls. Makes questionable decisions. Clearly lacks experience, even more-so than most 17-years olds
-Anticipation skills are average. Doesn't rebound, block shots or get in the passing lanes at a high rate. Potentially due to lack of high-level experience
-Limited perimeter shooter. Shot just 24/95 (25%) from 3-point range at UAA+Nations games this summer. Shoots the ball with a questionable one-handed release. Has a lot of work to do on his mechanics and consistency
-Shot just 78/133 (59%) from the free throw line at UAA+Nations games this summer
-Needs to improve his ability to create for others. Almost a 1 to 2 assist to turnover ratio at UAA+Nations (27 assists, 46 turnovers)very poor for a guard.

Outlook: Ultra-athletic shooting guard who hit a late growth spurt in the last few years that shot him from. Impressed with his physical tools and aggressiveness at Nations on both ends of the floor. Has had a very good summer that catapulted him into the national discussion as a potential McDonald's All-American level recruit in 2017. Will be interesting to see how his skill-level and feel for the game continues to evolve in the next few years.

D.J. Harvey, 6'6, DeMatha MD, Class of 2017
A detailed report on Harvey from earlier this summer can be found here

Strengths:
-Excellent physical profile. 6' 7 with a strong frame (upper and lower body) and long arms.
-Bouncy athlete. Good first step. Can play above the rim with ease.
-Very good shooter, especially when he's able to step into it. Shows potential as a shooter off the bounce. Footwork isn't great but he's able to create space off the bounce. Uses step backs. Throws ball in basket
-Shot 27/73 (37%) for 3 and 55/71 (71%) from the free throw line this summer in 21 adidas event games.
-Can straight line drive. Comfortable with the ball in his hands.
-Has the tools to be very good defensively.
-Has plenty of upside to continue to develop into a versatile all-around player

Weaknesses:
-Average passer who has room to improve on his feel for the game. Almost always looking to score. Loves to isolate and force up off balance jumpers. Tunnel vision while he's on the move. Throws up wild layups.
-Average finisher around the basket. Lacks a degree of toughness and physicality.
-Shot just 47% for 2 this summer in 21 adidas event games.
-Has some edge to him but not always in a positive way. Talks a lot of trash.
-Comfortable, but not an advanced ball handler.
-Needs to improve his footwork off the bounce. Every pull up is into a jump stop rather than a 1-2.
-Jump shot can be a little streaky. Flings the ball at the rim from time to time.
-Not always engaged defensively. Can do a better job bending his knees and sitting down in a stance.

Outlook:
Paras, who came to the US two years ago, is the son of Benjie Paras, a famous basketball player, TV actor and movie star in the Philippines. He has the physical profile, athleticism and shooting ability of a high-major wing, and potentially a NBA prospect. He can score at all three levels, finish above the rim and has the tools to be a very good defender. The UCLA commit, however, has a long way to go in terms of playing the game the right way and fitting into a team scheme. He does a lot of things that may earn him a very short leash very quickly under head coach Steve Alford. With that said, if Paras is willing to put in the work and can find a way to think the game at a higher level and become more of a team player, he has a chance to be a high-level player in the Pac-12 and set himself up for a successful future beyond the college ranks., possibly in the NBA depending on how his skill-set evolves.

Mustapha Heron, 6'5, Wilbraham and Monson MA, Class of 2016
A detailed report on Heron from earlier this summer can be found here

Strengths:
-Good size for a shooting guard at around 6-6, with a strong frame
-Smooth athlete
-Pushes ball aggressively in transition. Will find the open man
-Aggressively tries to create in half-court. Capable pick and roll and one on one player
-Shows some creativity with the ball. Hesitation moves, head-fakes, spins, etc
-Can finish with either hand
-Competitive and aggressive. Tremendous rebounder for a guard. 11.4 rebounds per-40 in 22 adidas event games this summer. Goes out of area frequently
-Shooting mechanics aren't broken. Threw in some pull-ups and spot-ups. Has some potential as a shooter if he continues to work on it. Shot 69% from the free throw line on a fairly high volume

Weaknesses:
-Good, not great athlete. Body is already very developed and may be close to reaching full potental
-Skill-level, decision making ability are a work in progress
-Not an efficient offensive player at this stage. Doesn't take many 3s. Shot just 48% for 2 at adidas events this summer.
-Needs to improve his advanced ball-handling skills. Tries to create frequently, but not overly efficient off the dribble at the moment.
-Forced to settle for pullups when he's unable to simply beat his man off the dribble and get all the way to the rim
-Limited perimeter shooter. Has a very deliberate stroke. Shot just 10 of 37 (27%) from beyond the arc in 22 adidas event games this summer
-Effort level of defense comes and goes. Tends to reach excessively. Can't always stay in front. May be pushed more to the wing or forward spots in college if he can't consistently defend guards
-Not a great decision maker with the ball. 29/41 assist to turnover ratio this summer. Spends a lot of time with the ball in his hands, but questionable if he can do so at higher levels unless he significantly improves

Outlook: Wing with decent size. Played a good amount of PG at Nations as well as with AAU team (Colorado Hawks). Getting recruited at the MM+/HM- level, which seems to be an accurate reflection of where he's at at the moment. Will have to decide if he prefers to go to a slightly lower level, where he can play and continue to develop his guard skills, or whether to commit to a higher level, where he's likely to be pushed to the forward spots.

Strengths:
-Aggressive scoring guard. 23 points per-40 in 24 summer events (EYBL, Adidas Nations, Nike Global Challenge)
-Always in attack mode looking to make things happen
-Lives at the free throw line. Over 8 FTA per-40
-Pushes ball very well in transition. Draws quite a few fouls in the process
-Can play some pick and roll. Changes speeds nicely
-Very competitive on defense. Displays a high intensity level consistently
-Gets in the passing lanes regularly. 3.2 steals per-40
-Terrific rebounder for a guard. 7.9 per-40
-Not a non-shooter. Can throw the ball in the basket both with feet set and off the dribble. Needs to tweak mechanics to become more consistent. Shot 96/122 (79%) from the free throw line this summer

Weaknesses:
-Has average size for a shooting guard at 6-3 ¼. Does not have great length to make up for it (6-4 wingspan)
-More of a wing than a combo guard at this stage. Decision making is fairly poor
-Posted a negative assist to turnover ratio this summer (64/71)
-Has a tendency to dribble with head down and drive into brick walls. Take questionable shots early in the shot-clock.
-Shot just 48% for 2 this summer
-Has a lot of work to do on his perimeter jumper, particularly off the dribble. Hit just 27/97 of 3-point attempts this summer (28%)


Outlook: Canadian shooting guard who goes to high school in Utah. Had a very strong showing at adidas Nations, scoring 30 points per-40 on very good shooting percentages. Displayed better potential as a jump-shooter than he had in other settings, but on a very small sample size. Aggressive player on both ends of the floor. Will be a very good college player. Needs to continue to round out his game to be considered more than that.