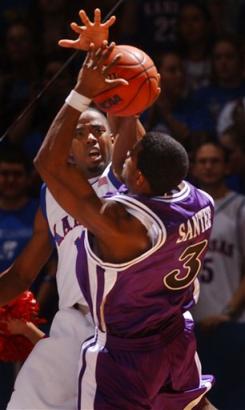 Matt Williams
@DraftExpress
Miles had a nice contest today, using his decided quickness advantage to get to the rim whenever he wanted. Irans guard couldnt keep up with him, and Miles did a good job both finishing at the rim and using his drives to the rim to set up teammates for open shots. The former Kansas point guard has made some strides since last season, showing some development in his pull up jump shot. His ability to take advantage of his athleticism was clear today, and while he cant do the same things on a higher level, he was one of Dallass best players today. Miles is a tremendous pass-first point guard on the international circuit, and hes a three-point jump shot away from being a NBA third point guard.
Read full article

Jonathan Givony
@DraftExpress
The all-time assist leader in Kansas history, Aaron Miles is quite a familiar name with NBA teams. He hasnt quite found a way to latch onto a team since going undrafted in 2005, but surely made a great case for himself as an NBA player this past season. Pau Orthez quickly found out that they made the wrong choice early on by signing John Gilchrist, and decided to bring in Miles to help get their season back on track. Miles did that and then some, helping Pau to reach the Top 16 of the Euroleague for the first time in their history, knocking off mighty CSKA Moscow once in the process, and finishing 2nd in the French league in assists with 5.8 per game. Things werent all that rosy as Pau did miss the Pro A playoffs, but Miles regardless had a very nice season.

Hell be playing with the Washington Wizards summer league next week, and in our estimation should have a good chance at making the team. Hes a pass-first point guard who is as steady and mistake-free as they come. He also plays fantastic defense, but has never been known as a scorer or outside shooting threat, something that we saw sparks of improvement from in the summer league last year. At the very worst, hes a cheap 3rd string point guard to sign for the minimum, although we think he can be more than that.
Read full article

Strengths
Miles is the heart and soul of the Kansas Jayhawks. He is an old school, fundamental, playmaking point guard that makes a huge impact on the game whether he's scoring or not. His game is full of the intangibles that coaches love. Both J.R. Giddens and Wayne Simien have him to thank for many of the easy baskets that he hands them every single game. It's his consistency and impeccable decision making that separates him from most other young point guards his age.

Miles is smart, patient and absolutely fantastic at putting the ball where his teammates want it. He controls the tempo of the game wonderfully, and can break down defenses in many different ways. He is excellent in both the half court offense as well as when he's pushing the ball in transition. His court vision is superb, and his post entry passing is almost an art form with the way that he just arcs the ball effortlessly right over the defense perfectly into the hands of his teammate for an easy dunk or lay-up.

Defensively, he is as solid as they come. His lateral quickness is excellent, and he almost always stays in front of his man and has no problem getting right in his grill if needed. He's got quick hands to get in the passing lanes and come up with steals, but he doesn't risk his defensive positioning excessively. He fights through screens like a real pro, and is excellent at putting pressure on the ball.

It appears that his shooting this year is much improved. He shot 46% from the field and 50% percent from behind the arc, although without a huge number of attempts to rely on for an accurate measure (about 6 FGA's and 2.5 3PA's per game). That has been one of the main things holding back his NBA potential in recent years, and if he manages to keep shooting at a good clip his stock will only continue to rise.

Miles has a very good demeanor both off and on the court, and is described by his teammates, coaches and basically everyone around him as a natural born leader; a gym rat, very humble and a perfect teammate with an outstanding boyscout type personality.

Something else that needs to be considered is the fact that he's racked up an unbelievable amount of wins in his 4 year NCAA career so far, and has also taken his team deep in the tournament in each of those seasons (two Final Fours and one Elite Eight so far).

Considering that he's a PG and has played a big role since his freshman year, that's got to raise some eyebrows.

Matt Broz 2003-04: While smaller than most PG's, Miles has great court vision. His ability to dish the ball is the main reason he has seen so much floor time on a team with many stars. His ability to give the ball up to a shooter, is among the best in the nation. He's a natural leader on the court which goes well with his capacity as Kansas' floor general. Plays tenacious defense.

Weaknesses
Size is a bit of a concern for Miles, at 6-1 1/2 in shoes and without a whole lot of meat on his body. While he is by no means slow, he won't be confused with TJ Ford or Raymond Felton anytime soon either.

The fact of the matter is, Miles won't ever be anything more then just a solid role player. That's what he's been his whole college career, and he doesn't seem to have a problem with that. In fact, that's probably his biggest weakness, he's just not flashy (or conceited) enough to draw attention to himself. He'll at times pass up open shots and make an unnecessary extra pass instead.

Something that has always been a knock on Miles is the way he's played in big games. He seems to lose his calm and steady demeanor when he things are on the line and his team needs him the most.

Some will wonder he will perform when he's taken out of the very cozy system he's been in at Kansas for the past four years, somewhat similar to the questions that were asked of Chris Duhon last year out of Duke.

He'll also have to prove in NBA workouts and probably at Moody Bible that his much improved shooting ability this year is no fluke.

Matt Broz 2003-04: While a PG isn't expected to make many shots, it'd be nice to see Miles make a few sometime. His shooting is terrible. Point blank. For Miles to have a long career in the NBA, he needs to learn how to take the shot, when given to him, and knock it down. Or else he won't be around for long.

Has started all but one game (senior day his freshman year) in his career. Named to the Big 12 All-Freshman Team, averaging 6.8 assists per game. Helped his team to the Final Four, ending the season with a 12 point, 10 assist double double against Maryland.

Started every game for Kansas as a Sophomore, and again helped his team to the Final Four, where they lost to Syracuse in the National Championship. Finished 11th in the nation with 6.4 assists per game and led the Big 12 in steals.

As a Junior, earned Academic All-Big 12 honors. Led the Big 12 in steals and assists once again. Helped his team to the Elite Eight, where they lost in overtime to Georgia Tech.


Matt Broz 2003-04: Competition in the Big 12 for anybody is challenging. But when you're a guard, it's hell day in and day out. In his first two years, he played alongside some of the best guards the league has been able to produce in Kirk Hinrich and Jeff Boschee, Kansas' all-time leader in 3-pointers made. So far he's been the only consisent KU player to flirt with having the first triple-double in the program's history.

Outlook
Miles has had a good enough career at Kansas and has established enough of a future role for himself to get drafted. With the way he's been playing this year, especially in the absence of Wayne Simien so far, he might even get some late first or early second round looks from a team looking to secure a solid backup PG for years to come.

Matt Broz 2003-04: Expect Miles to spend all four eligible years in college, and then look towards the league. If Miles improves his shooting a tad, look for him to be a mid to late second round pick in 2005.

Facts
Holds the Kansas record for career assists, 805 and counting, recently surpassing Jacque Vaughn. Also is #1 all-time in the Big 12, and top 25 ever among all Division I players.
Read full article