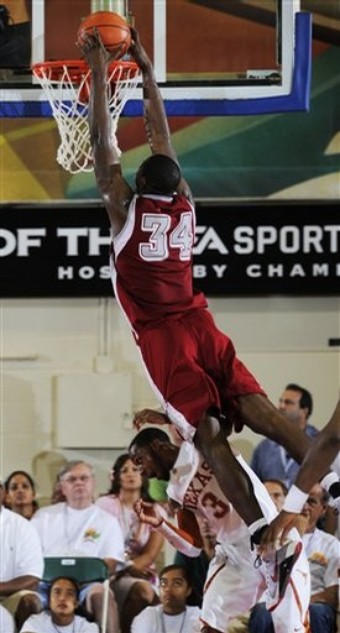 Joseph Treutlein
@DraftExpress
After a very promising sophomore season, Ahmad Nivins took somewhat of a step back as a junior, seeing his production levels slightly fall as he dealt with some ankle injuries and tried to remodel his game with some added finesse. Now a senior, his slight down year looks more than worth it seeing how hes blossomed into a star for St. Josephs, where his production and efficiency are up across the board, as hes cracked the statistical top 25 in a slew of categories in our database.

Compared to when we last wrote about Nivins two years ago, his game has progressed significantly in many phases. One thing that jumps out immediately is that his FG%, FT%, and True Shooting% have each steadily increased over the past three seasons, even with his huge bump in usage this season. Another statistic of note is the fact that he plays an astounding 39.6 minutes per game, #1 in our entire database, and posts an outrageous 72% True Shooting percentage also good for #1. More impressive than that is his consistency over the course of the season, as looking at his game log hes scored more than 14 points in every contest this season and the worst hes shot from the field in one game this season was 5-for-11.

Although hes made significant improvements in his stat-lines, Nivins is still very much the same player physically, aside from having a well-noted boost in conditioning. Boasting pretty good length and a very strong frame at 69, hes both mobile and coordinated for a player his size, but he lacks in quickness, and his explosiveness from static and near-static situations is not much to speak of. However, when he has a head start, such as on pick-and-rolls and in transition, Nivins is able to get off the floor quite well, but this unfortunately doesnt help him much in his post-up game.

Looking at his game, the one area that stands out the most in comparing with years past is Nivins finesse game on offense, which has improved notably over the past two years. While he isnt going to fool anyone for Chris Bosh, he shows a respectable ability to face-up and put the ball on the floor for straight-line dribbles from the 15-foot range, scoring on running hooks and pull-up jumpers despite a lack of quickness. Speaking of his face-up game, Nivins mid-range jump shot is much improved as well, as he shows good form from 15 feet out featuring a high and quick release and a shot that he hits with relative consistency.

In the post, Nivins has a decent repertoire of moves at his disposal, and his awareness and decisiveness have both steadily improved over the past few seasons. He can turn to his left or right shoulder, fade away with hook shots and turnaround jumpers, or attack the basket strong with drop steps and step-throughs, while he shows a nice command of reverse lay-ups at the rim and shows a decent command of counter-moves. Due to his lack of explosiveness from standstill positions, Nivins is mostly an under-the-rim player in back-to-basket situations, but his game has evolved to the point that he doesnt simply rely on his brute strength to get the job done, now having a pretty well-diversified attack.

While Nivins game hasnt been exposed against elite competition this season, his production did somewhat drop-off against teams such as Texas and Villanova, where he showed some struggles dealing with athletic double teams in the post, and didnt show the quick decision-making skills to get out of the situation. While his post moves arent slow, the speed at which he gets them off would be below average in the NBA, and this could be a problem for him if he doesnt improve it, especially as a non-elite athlete at 69.

As for the rest of his offensive game, Nivins does a pretty good job getting open without the ball, especially on pick-and-rolls, where he shows a good ability to catch and finish with power and explosiveness. He also does a pretty good job getting out in transition for a man his size, and is a terror on the offensive glass, showing good pursuit abilities in combination with his size. Nivins also is much improved on the defensive glass this season, getting to a more than respectable level in an area that was previously a major problem area for him.

On the defensive end, Nivins shot blocking has gone up this year, as he shows pretty good awareness, though hell probably never be a huge threat at the next level in this area with his lack of quickness. In the post, Nivins shows pretty decent fundamentals, but often seems too content to just keep his hands up and move his feet, not showing much physicality, often leading to relatively easy shot attempts for the opposition. On the perimeter, his lateral foot speed is not great, and while hes pretty active and aware on pick-and-rolls, he just doesnt have the physical abilities to hedge and recover at a very high level.

Nivins should be an ideal candidate for the Portsmouth Invitational Tournament, where players in his mold have greatly thrived in the past. With an NBA-ready body, a pretty well-developed skill set, and after showing the ability to steadily improve his game over his four years in college, Nivins should get quite a few chances to prove he belongs in the NBA, be it in the pre-draft process, at summer league, or in training camp. Itll still be an uphill battle for him to get drafted in the second round given his lack of elite athleticism, but its certainly not out of the realm of possibility, especially if he can maintain his excellent production for the rest of this season, and maybe make the NCAA tournament.
Read full article

Joey Whelan
@DraftExpress
One of the most efficient scorers in the country last season, particularly impressive considering his sophomore status, Ahmad Nivins is still flying somewhat underneath the radar despite his likely status as the top player in the Atlantic-10. Nivins made a huge jump from his freshman to sophomore season, upping his scoring averages by 10 points (from 6 to 16) while maintaining his terrific 60%+ shooting averages from the field. He was a fairly unheralded high school prospect out of St. Anthonys in New Jersey, a pupil of legendary Bob Hurley, who is widely considered the top high school basketball coach in America.

Nivins will likely begin to establish himself as a legit NBA draft prospect in his junior season, as hes an impressive player in a couple of different areas. He has good size at 6-9, with very long arms, an excellent frame, and solid athletic ability. Hes a pretty nimble player, not terribly explosive, but coordinated and surely mobile enough to where his physical attributes wont be holding him back.

Quite a force at the Atlantic-10 level, Nivins is a very difficult player to stop once he establishes position deep in the paintwhich seems to be quite often. He has tree trunks for legs and does a very good job positioning himself for post-entry passes (which St. Joesparticularly Pat Calathes--excels at throwing), complimented by excellent hands and outstanding touch around the rim. Hes an incredibly sure finisher around the hoop (especially on cuts to the basket), very smart using the glass, and relishes finishing with contact. He gets to the free throw line at an excellent rate (4th among all returning draft prospects per 40 minutes, tempo adjusted, and very rarely will you see him get rattled, as he has a very calm, composed demeanor on the court. Generally speaking, hes a smart, fundamentally sound player who works hard and seems to understand his rolejust like his high school coach Bob Hurley demands from his players.

Nivins is a good offensive rebounder as well (3.8 per 40 minutes), although his work on the defensive glass (4.7 per 40) still leaves something to be desired. Over 50% of his offense comes on post-ups, with another 20% from offensive rebounds. That tells you a little bit about the lack of versatility we currently see from Nivins, although you have to think some of that has to do with the system he plays in.

Nivins has the size of a power forward as far as the NBA is concerned, but he plays like a center, using his brute strength to establish position deep in the paint, and looking quite a bit less effective if hes unable to do so. If forced to create offense for himself outside of 3-5 feet, Nivins struggles, not showing many counter-moves with his semi-raw jump-hook and underdeveloped turnaround jump-shot. He avoids going to his left hand in the post, almost never puts the ball on the floor when facing the basket and only took a handful of jump-shots all season long, even if he did show decent shooting mechanics when doing so.

These are parts of his game that NBA scouts will want to see more of by the time hes done at St. Joes, as he clearly wont be able to rely on his strength to dominate in the NBA the way he does in the A-10, and therefore will be expected to show some finesse. Things are working pretty well for him right now we must say, though

Defensively, Nivins will have to show that hell be able to defend his position (PF) at the next level as well. At the moment he looks more focused on the other end of the court, often looking to stay out foul trouble, and giving up excessive space in the post, which could very well be a direct order from the coaching staff considering how heavily they rely on him offensively. Nivins seems to have just average lateral quickness when forced to defend pick and roll plays on the perimeter.

It will be interesting to see how Nivins progresses from his sophomore to junior seasons, as he has a lot of things going for him already. If he manages to improve his finesse game while helping St. Joes win games, we could have a very interesting prospect on our hands.
Read full article