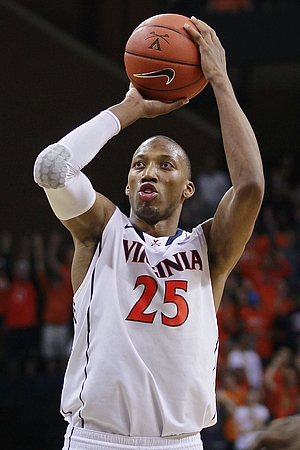 Although not the most flashy player in the scoring department, Mitchell did a lot of good things on both ends of the floor on Friday night that showed his ability and willingness to play a role. The 6' 9 Virginia big man proved to be one of the most fundamentally sound defenders both on and off the ball in the tournament, racking up four steals and two blocks while limiting his man both on the block and on the perimeter.

Mitchell possess excellent feet that allow him to hard hedge and recover to his man quickly, something he did on multiple occasions on Thursday, one of which led to a steal and eventual alley-oop finish in transition. He also showed excellent closeout technique and the ability to keep quicker players in front of him, an ability that bodes well for him at the professional level. Sporting a fairly thin upper body, Mitchell isn't the strongest power forward out there but his thick lower body allows him to bang in the post.

Mitchell is also an excellent team defender, keeping his head on a swivel off the ball and making sure he's in help position on baseline drives. He didn't get a lot of steals and blocks at Virginia (1.2 steals and 0.9 blocks per 40) in part due to his average wingspan (6' 11.25) and Virginia's pack-line defense. Mitchell's awareness, along with his above average athleticism, also helps him as a rebounder, where he posted 10.9 rebounds per 40 (3.0 offensive and 7.9 defensive).

On the offensive end, Mitchell is very limited, evident by the 10.5 points per 40 minutes he scored as a senior. While he can use his athleticism and agility to run the floor, Mitchell isn't much of a factor in the half court. He's a very sound passer but lacks a mid-range jumper (42.7% from the line) and a back to the basket game. Mitchell would much rather blend in the background offensively, moving the ball and setting screens. Mitchell's defensive impact, athleticism, rebounding, and ability to play a role make him an intriguing summer league and vet camp player. He's the type of player who could absolutely find his way onto a NBA team's roster.
Read full article

No longer buried behind the graduated Mike Scott, Akil Mitchell saw a nice uptick in his minutes played from 22 to 30.5 per game, which lead to an increase in his point production from 4.1 to 13.1 points per game in his junior season.

Mitchell does not have great height at 6'8 ½ in shoes, but he compensates for that with a solid 6'11 ½ wingspan and a very strong 232 pound frame. His athleticism is what stands out and his greatest asset at this point, as the energy he provides to the team is fueled by it. He runs the floor well in transition and complements this skill well by being an excellent finisher at the rim, as he shot 65.7% around the basket last season, according to Synergy Sports Technology.

Mitchell is a great rebounder, especially on the defensive end, where he averaged 8.7 rebounds per 40 minutes pace adjusted which ranked 3rd among all returning top-100 prospects. His offensive rebounding numbers of 3.8 per 40 minutes pace adjusted aren't as good but this may have more to do with the system he plays in, which places a major premium on transition defense. He shows the same hustle and ability to chase down rebounds on the offensive end, but he doesn't get many opportunities to crash the glass in Tony Bennett's system.

Much of Mitchell's halfcourt offense comes from his own court awareness, as he cuts to open spaces so that teammates can deliver him the ball in scoring opportunities. He rarely creates offense for himself off the dribble and relies on teammates getting him the ball close to the rim for points. He has the basis to be a decent post player, as he showed a nice drop step complemented by a hook shot that he can convert with either hand, but he may have trouble if stronger players try to push him away from the block.

Mitchell is not a jump shooter, as he took only 37 jumpers last season, according to Synergy Sports, where he shot 32%. However, he shows good form on his release and could become a reliable mid-range jump shooter with a little bit of work.

Defensively, Mitchell struggles against ACC players and will find himself in a similar bind against tougher competition. He can get backed down by bigger and stronger players in the post, while he struggles to guard quicker players on the perimeter. Against the pick and roll, he often hedges out too hard and is slow to recover, leaving the defense vulnerable as he is caught in no man's land when the guard is able to dribble around him.

He uses his energy well on the defensive end as he flies around the courts at times to challenge shots and create turnovers. His 1.8 steals per 40 pace adjusted tied for third among top-100 power forwards last season. He'll need to bring this kind of energy every night to make up for his deficiencies in other defensive areas.

Seeing most of his minutes at the center position last season in front of talented freshman Mike Tobey, Mitchell will likely spend more time at power forward this year alongside the developing 6-11 interior player, which should be beneficial for him considering he's too undersized to play that position in the NBA. Showing he can hold his own against some of the better power forwards he'll face defensively will be an especially important test for him.

Mitchell will be a key contributor to an experienced Virginia team who is looking to improve off their 23-12 record and NIT quarterfinal berth last season. It will be tough for Mitchell to show his skills that will translate to the NBA in a system that doesn't always showcase his strengths as a player, so he'll need to keep his motor level high to catch the eye of NBA scouts. He will then need to improve on the defensive end, showing he can guard a specific type of professional caliber player, to be taken seriously as a prospect.
Read full article