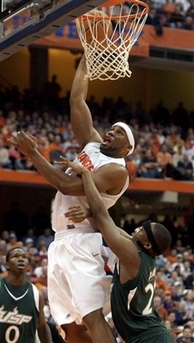 Onuaku, at 29 years old heading into his seventh full professional season (and sixth summer league campaign) is a pretty well known commodity at this point. He has spent time (11 games) on the fringe of NBA rosters with New Orleans, Cleveland, and Minnesota, but has seen the majority of his career in the D-League and overseas, most with Maccabi Tel Aviv in the Euroleague. With his long arms and chiseled frame, Onuaku is at his best finishing around the basket and cleaning up on the boards. He averaged 16.1 rebounds per 40 minutes in Orlando, finishing third all-time behind Andre Drummond and Jack Cooley's averages of 20 and 19.6 in 2013. Onuaku has some moves in the post, although almost everything is towards his left hand. He finishes very well around the basket and often gets fouled if he doesn't. Defensively, he is undersized for a center and can have a hard time defending ball screens on the perimeter. At this point in his career he is an efficient offensive player who will likely continue to have a successful overseas career. There's a significant market in Asia and Europe for players in his mold and he will be compensated well for his efforts.
Read full article

Joey Whelan
@DraftExpress
After losing his sophomore year to a medical redshirt, Arinze Onuaku returned last season as one of the Big Easts most improved players. In almost four times as many minutes per game, Onuaku responded to the tune of 12.7 points on 62.8% shooting, 8.1 rebounds, 1 steal and 1.3 blocks per game. It was a season of great improvement, but also one that showed how far he has left to go before he can be considered a serious NBA prospect. After a productive summer, expectations are even higher, and he will now have to prove himself against some of the countrys top big men.

At 69 and possessing a muscular 258-pound frame, Onuaku is undersized for an NBA power forward, let alone a center. This is problematic, because his skills best translate to the center position at this point in time. He is not very athletic to compensate for his lack of height, either. Though, he runs the court well and shows a good activity level on the blocks, he has limited explosiveness and once he moves away from the basket, his athletic limitations are on full display. Onuaku is a very strong player, however, which may be his principle physical selling point right now, and he is very difficult to get around in the post.

Offensively, little has changed since we last wrote about Onuaku in January. As seen in his 62.8% shooting from the field, 63% effective field goal percentage and 60% true shooting percentage, he is an extremely efficient offensive player and ranks in the top ten of returning big men in each category.

These numbers are partially attributed to fact that he gets an overwhelming majority of his points around the basket. According to Synergy Sports Technologys database, almost 57% of his offense comes from either post-ups or offensive rebounds. This is an indication of how truly limited his game is right now. Last year, however, he showed some occasional flashes of versatility. His most notable addition was a consistent hook shot through which he shows decent touch, as well as developing footwork.

While his inability to successfully put the ball on the floor is an area in which he absolutely must improve, his shooting form needs the most significant work. His 44.5% from the foul line, good for sixth worst in the country, is indicative of these shooting woes. Similarly, his basketball IQ could stand to improve as he has a tendency to take the ball up to the basket, no matter who is in his way, which leads to turnovers and offensive fouls. He averages 3.1 fouls per game and 1.9 turnovers per game, despite averaging less than one assist per game. If his offensive game does not continue to expand, he absolutely must become a smarter player to better understand his limitations.

One area where Onuaku does excel at the moment, however, is as a rebounder. He averaged 8.1 rebounds per game, 3.3 of which were on the offensive end. His size and strength on the blocks allows him to be a force on the boards, and though he is not going to get many rebounds out of position, he is effective at this level.

Defensively, it is the same story. He does well on the blocks, using his size and strength to intimidate post players, but does little in terms of guarding perimeter oriented power forwards, usually picking up a foul or getting beaten to the basket. As we have stated before, proving he can guard men on the perimeter would definitely help his case to NBA scouts. He is not much of a shot-blocker, either, and does not challenge shots nearly enough considering his size at this level.

Onuaku is somewhat of a long-shot to get drafted in the future, because like most collegiate post players who lack ideal size and athleticism, there are simply too many basketball-related questions left unanswered.

That said, he showed many improvements last season that show that there is potential for him to continue to improve. Diversifying his game is essential at this stage, perhaps in the form of developing a consistent spot-up jumpshot and/or showing better defensive fundamentals. Currently he is too much of a tweener, as he possesses the skill set of a center and the body of a power forward. He will likely play all four years at Syracuse and will have to prove himself against the Big Easts many elite big men before the NBA will come calling.
Read full article

Joey Whelan
@DraftExpress
After missing all of last season due to surgery on his left knee, Arinze Onuaku is back on the floor for Syracuse and providing a solid presence in the middle. Currently the sophomore is one of five players on the team averaging in double figures scoring and is second on the team in rebounding.

Onuaku is exclusively a post player at this level, proving to be more center than power forward and showing essentially no ability to play on the perimeter. While he is able to be an effective player at the collegiate level doing this, he isnt big enough to be solely an interior player at the next level. Onuaku is an effective scorer when his teammates get him the ball within eight feet of the basket, though. He has a very solid 260-pound frame and does a good job of sealing defenders on his back when posting up. He doesnt get a tremendous number of touches here, only accounting for 15% of his teams possessions this season, but when he does he looks to be pretty comfortable. Onuakus go to move is a soft baby hook shot which he can hit with either hand on a fairly consistent basis. While he isnt a great leaper he can still get this shot off against most players due to the nice job he does using his body to shield the ball.

Currently second in the Big East in field goal percentage, Onuaku gets loads of point blank looks thanks to his teammates being able to penetrate and draw defenders. With that said though, Onuaku shows great touch around the rim and his strength allows him to finish in traffic and with contact. He isnt explosive enough to elevate over defenders as much as he goes through them, but if given room he can thrown down a thunderous dunk. Despite all of the looks he gets inside from slashing teammates Onuaku typically doesnt move very well without the basketball. Aside from the occasional screen to set up the offense, he usually plants himself on the block even when on the weak side. Since he isnt a threat to shoot at all from outside the immediate area of the hoop or to put the ball on the floor, Onuaku rarely will flash to the foul line area unless it is to screen the ball handler.

The other major source of offensive touches for Onuaku comes on the offensive glass. On the season he is averaging 3.4 offensive boards a night which generally result in points for the big man. While he is almost impossible to move or get around when he has an opponent boxed out, Onuaku typically only brings in rebounds that fall directly in his area, and this is true on both ends of the floor. His lack of great length and athleticism prevent him from even attempting to bring in loose balls outside his immediate vicinity.

On the defensive side of the ball we didnt get to see a tremendous amount of Onuaku in man-to-man situations due to Syracuses famed use of the 2-3 zone. Typically in the zone, Onuaku isnt tremendously active. He plays the middle position, but often just floats around in the paint, not picking up opponents that cut through. When he does man up against ball handlers he tends to be a fairly passive defender. Onuaku doesnt contest many shots in the post or when he steps up against shooters from mid-range, and the fact that he plays with his hands at his sides often makes it easier for opponents to get position inside.

Onuaku still has a couple of years to develop as a pro prospect, but he needs to start extending his game beyond the immediate area around the basket. His lack of size and athleticism will always be strikes against him in the eyes of NBA scouts. Onuaku needs to develop a mid-range jump shot and improve his ball handling skills. Improving his ability to step out and guard perimeter players would certainly help his stock as well. His strength, toughness and solid post play coupled with Syracuse being a team usually around come March, will help Onuakus case.
Read full article