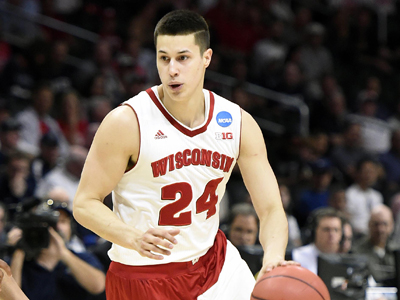 Replacing Traevon Jackson as Wisconsin's starting point guard after Jackson fractured his foot in a mid-January loss at Rutgers, Bronson Koenig rose to the occasion, helping Bo Ryan's Badgers to a National Championship berth. A La Crosse, Wisconsin native who ranked among the top-100 prospects in the high school class of 2013, Koenig made timely contributions in both of Wisconsin's Final Four runs, emerging as a player to keep an eye on as he and Nigel Hayes look to assume the leadership roles vacated by Jackson, Frank Kaminsky, and Sam Dekker.

Listed at 6'4 with a 193-pound frame, Koenig has impressive size for a player that spent most of the season running the point for one of the top offensive units in college basketball. He isn't overwhelmingly long or explosive as a leaper, and though he does possess nice quickness, his athleticism is not a major selling point for him as a potential pro.

What makes Koenig intriguing is the unique blend of skill and decision-making that landed him among the most efficient offensive players in the country on a number of fronts. Averaging 8.7 points and 2.5 assists per-game, the junior guard wasn't overwhelmingly productive, but was one of the most valuable role-players in all of college hoops down the stretch run of the season.

As a scorer, Koenig relies heavily on his fundamentally sound jump shot. Seeing most of his opportunities on spot ups, pick and rolls, and isolations within the swing offense, 83% of Koenig's field goal attempts in the half court are jump shots. Koenig ranked in the 88th percentile of the NCAA overall scoring 1.123 points per jump shot according to Synergy Sports Technology, even though his attempts were almost evenly split between pull-ups and catch and shoot opportunities. Shooting the ball with a fundamentally sound stroke and good range, the junior guard demands defensive attention, proving especially deadly from the left wing.

Though he isn't particularly adept at creating high percentage shots around the rim, and scores a below average .882 points per shot finishing around the basket in the half court when he does find daylight, Koenig is comfortable handling pressure and uses hesitation and step back moves effectively to create space for himself to get his jump shot off in a pinch. To compound his struggles scoring inside the paint and getting to the free throw line, he does have somewhat of a tendency to settle for difficult looks in the mid-range area, which helps explain why he shot a very poor 42% from 2-point range last year.

The scouting report on Koenig's passing isn't all that different from his that on his scoring ability. The Aquinas HS (WI) product wasn't a prolific passer, but averaged 3.7 assist-per 40 minutes pace adjusted and an extremely low 1.3 turnovers per 40 minutes pace adjusted. Koenig isn't a dynamic drive and threat option, but does an exceptional job making the right read on the pick and roll, not forcing the issue in the half court, finding the open man underneath, and feeding the hot hand.

Given his strong feel for the game and the way it manifested itself a year ago, it will be fascinating to see how Koenig grows into the more prominent role he's sure to play as a junior.

Defensively, Koenig plays hard, but his lack of length and athleticism hurt his ability to make a significant impact on this end of the floor. He struggles at times against the pick and roll, and without a quality rim protector behind him, was exploited by quicker, stronger guards in the half court. Though his physical tools may never allow him to be a standout on this end of the floor, he has room to improve in the coming seasons.

Looking ahead, this will be fascinating season for Koenig as his role could expand considerably. There's little doubt that Wisconsin will take a step back without Kaminsky and Dekker, but they figure to be difficult to beat as always and the combination of Koenig and Hayes give them some hope for the future. With two seasons of eligibility left in Madison, it is too early to draw too many firm conclusions about Koenig, and he is certainly a player to keep an eye on this season.
Read full article