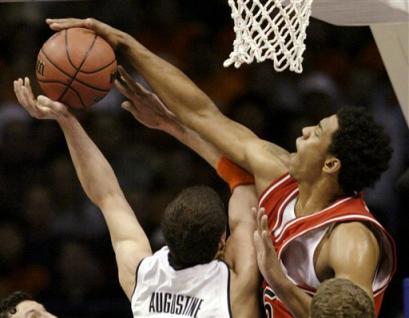 Matt Williams
@DraftExpress
Overview:A long, athletic power forward who provides very nice depth and is an asset thanks to his combination of physical tools and high skill-level. Possesses a big wingspan and adequate size for both post positions. Could stand to get stronger to improve his ability to hold position on the block. Has added weight since entering the League, but more certainly wouldnt hurt. Offers some versatility offensively with his ability to play high or low in the paint. An average defender who struggles to stay out of foul trouble. Had an extremely efficient four year career at Arizona, but wasnt a dominant force by any means. Played his way into the lottery with by using his size and touch to shoot a very impressive percentage from the field. Had a great rookie season being named to the All-Rookie first team, but has seen his numbers decline in each season since, partially due to injuries. Has been criticized at times for a certain lack of toughness. Will show signs of potential, but needs to have a consistent role. Brings a lot to the table off the floor. One of the good guys in the League.

Offense: A quality offensive big man who hasnt put up the same numbers since his outstanding rookie season. Gets about half of his touches from a combination of pick and rolls and spot up opportunities. Will also get some opportunities to post up and makes some scoring chances for himself by working on the offensive glass and moving without the ball. A classic modern day power forward due to his ability to space the floor from the outside, but still make plays around the hoop thanks to his length and athleticism. Has extremely soft touch from the perimeter for a player his size, but tends to fall in love with his jumper at times. Possesses textbook form. Has range out to college three point range, and sometimes beyond. Surprisingly capable shooter off the dribble. Tends to float when he pulls up going left. Capable of putting the ball on the floor one or two times to score, but isnt going to break anyone down with a crossover anytime soon. Pretty perimeter oriented for a big man, but shoots a solid percentage from the field regardless. Has good hands and the athleticism needed to finish plays effectively at the rim, but usually not with authority. Doesnt take contact very well, and goes to the line at just a decent rate. Struggles to get good position on the block and doesnt have a great deal of moves in the paint. Has a well developed face up game, and loves to drive to his right and use a smooth running hook when he can get his man off balance. Works well off the ball and gives and effort on the offensive glass. Moves the ball well, but isnt a flashy passer. Doesnt turn the ball over as often as most big men who like to play outside. Generally has a good feel for the game and a nice skill-level. Brings a lot to the table on the offensive end in that he is big enough to play center and make plays around the rim, but can also stretch the floor as a PF for a low-post big man like Greg Oden or LaMarcus Aldridge. Would likely be able to put up very good numbers on a team without as much talent in the frontcourt.

Defense: Has the size, length and athleticism to be effective at times, but lacks the strength or toughness to live up to his potential on this end. Will get pushed around by bigger players on a regular basis and usually doesnt offer much resistance. Has a hard time holding position. Capable of defending some power forwards, but has just average fundamentals and awareness out on the perimeter. Not able to come over from the weakside to block shots like he used to. Cant hedge pick and rolls to the same extent either. Rebounds the ball at a respectable clip. Is extremely foul prone on a per-minute basis. Has a lot of room for improvement on this end of the floor, and will have to do so if he wants to see playing time under Nate McMillan.
Read full article

Strengths
His biggest strength has to be his size, at nearly 7 feet tall. For a player his size, he runs the floor extremely well and can get up off the floor to finish plays at the basket, change shots defensively and rebound in traffic. On top of that, he has a very nice wingspan which makes him an excellent shot blocking threat at the college level, especially coming from the weak side. When he is focused and motivated, his timing can be very impressive.

Offensively, Frye is a finesse player who prefers to face the basket and owns a very nice looking jump shot. He has range out to about 16-18 feet and can consistently knock down the mid-range jumper if you give it to him. His numbers from the free throw line most certainly back that up, at 83% which is outstanding for a big man. In the pros, the pick and pop should be a great play to run for him. Around the basket, Frye can score as long as he isn't being contested too fiercely thanks to his height, length and athletic ability. He has a nice little jump hook shot that could become his go to move in the pros. Frye is an efficient scorer who makes the most of his touches, shooting 56% from the floor in his four years at Arizona on over 700 field goals made.

In terms of character and intangibles, Frye is about as solid as you'll find. He is an intelligent, soft spoken kid who carries himself well both on and off the floor and will be an excellent locker room presence in the pros.

Weaknesses
Physically, he has a very narrow frame that will likely not be able to carry too much weight. Right now he gets pushed around an awful lot and this hurts his potential as a big man in all aspects of the game. His foot-speed is fairly average, although at his height that usually wouldn't be too much of a concern.

Offensively, he lacks the strength or tenacity to establish and hold position in the paint. If he does get the ball, he does not have the lower body strength or footwork to back his man down to the basket or finesse his way towards the hoop. A quick shove in the back and Frye usually finds himself outside the paint. Not being the most contact loving player in the world, he's hardly the type of guy that will really push back either, so this could be even more of a problem in the much more physical NBA. When he does catch the ball inside the paint in a position to score, he often takes too long to gather himself for a strong finish, giving the defense time to react and stop him. He has some trouble finishing around the basket sometimes due to the fact that he is lacking in upper body strength. At times, usually when he is tired of being banged around inside, Frye has a tendency to settle for extremely soft shots outside of the paint.

Defensively, he does not have the strength to guard NBA post players right now, or the lateral quickness to take care of power forwards if they take him out to the perimeter. His man to man defense is fairly poor, using his hands far too much rather than his feet, although he makes up for this at the collegiate level with his shot-blocking ability. He also has a tendency at times to bite on pump fakes and leave his feet, or rotate over to help on defense and sacrifice his position for the defensive rebound in the process.

On the glass, Frye tends to rely too much on his size, length, athleticism and the fact that he is usually 3 inches taller than anyone else on the floor to come up with rebounds. He lacks great positioning and sheer desire in terms of boxing out his man and crashing the glass. It's not rare to see him being out-muscled by a smaller player for a loose ball, simply because the other guy looks like he wants it more.

Frye didn't seem to have a problem being a role player at the college level, despite the fact that he VERY rarely faced anyone in college who can match his size and talent level. Consistency has been an issue for Frye and his mental toughness has been questioned over and over again in his four year at Arizona, as he has problems staying focused and hungry throughout the course of an entire game, and can get extremely passive and tentative. He's not the type of player who can really score many points if you aren't running plays for him.

Competition
Frye logged heavy minutes for four years at one of the top NCAA programs in the country, the University of Arizona, under the well respected coach Lute Olson. Not an extremely highly touted recruit, but has been a fixture in Arizona's starting lineup almost since day one. Expectations were sky high for Frye to develop into one of the most dominating centers in the country after a terrific freshman year where he averaged nearly 10 points, over 6 rebounds and 1.5 blocks in just under 24 minutes, but his development as a player came slower than expected over the following three years. In his sophomore year he had 12.6 points, 8 rebounds and 1.9 blocks per game in 25.4 minutes, helping Arizona to within one game of the final four before losing to Kansas in the elite eight. The following season Frye put up 15.9 points, 7.4 rebounds and 2.1 blocks, but Arizona was upset that year in the first round of the tournament by Seton Hall. This year Frye put up similar numbers, with 15.8 points, 7.6 rebounds and 2.3 blocks, once again helping Arizona to within one game of the final four before relinquishing a double digit lead in the final minutes and losing a heartbreaker to Illinois in overtime. Frye was excellent in his last college game with 24 points (11-14), 12 rebounds and 6 blocks, although Illinois' front court did not really strike fear in any big man's heart this year.

Outlook
Projections on Frye are all over the board at this point, with some scouts believing he will end up as a top 20 pick and others hinting that they would not give him consideration before the 2nd round of the draft. Workouts will be extremely important for him. He is the type of player that could help his stock out tremendously by playing at the pre-draft camp in Chicago, but (and this is just a hunch) it's unlikely that we will see him there considering that he most likely will think that he doesn't have to be there. Therefore, private workouts will most likely help decide where he ends up landing. Frye has been hovering around 25-35 in our mock draft for most of the season.

Comments
For reasons already stated, I personally do not see Frye's game translating very well over to the NBA. I could see him becoming a decent rotation player in the league for someone, but not much more than that. Hopefully he will prove me wrong next season, though. It's possible that he will get drafted higher than we thought he would, but how he fares in the pros will ultimitely decide who was right here.
Read full article