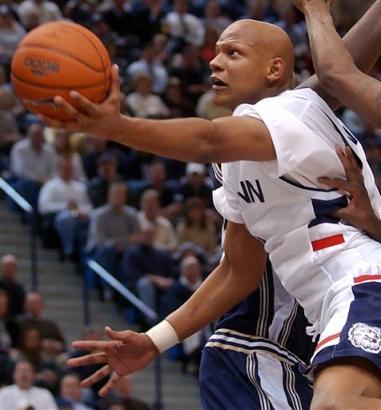 Matt Williams
@DraftExpress
Overview: An athletic power forward who has good skills, but is stuck between the post and the perimeter in terms of his potential. Has good size and length for either position. Shows the athleticism necessary from each as well, even if he cant defend small forwards. Very explosive leaper. Lack ideal strength, which is problem for him down low. Has added some muscle to his frame. Displays a versatile skill set. Can do a lot of things with the ball that players his size cant. Has had a difficult time improving as a shooter. No longer able to get by on athleticism and coordination like he did during his days as a prep at Blair Academy and in college at UCONN. Won an NCAA Championship with the Huskies in 2004. Needs to show more effort. Has the tools, but wont be able to put them together unless he dedicates himself. Has been criticized for playing too soft, passive at times, and not always looking very focused.

Offense: A solid offensive player who has the potential to be much better. Gets almost two fifth of his offense from spot up opportunities with sizeable portions coming from post ups and offensive rebounds as well. Displays a smooth, but inconsistent jumper outside with range out past the three point line. Has improved his range since entering the League, but the consistency is still pretty far off. Decent catch and shoot guy. Pretty solid shooter off the dribble as well. Tends to drive left way more often than right. Displays good ball handling ability, but is too loose when he is trying to break his man down. Shows solid back to the basket skills, but turns over his left shoulder too predictably. Proves to be a solid finisher at the rim when he can get to it. Can play above the rim on every possession. Pretty good offensive rebounder. Still developing his perimeter and post skills. Has the raw versatility to become a very good player down the line.

Defense: An average defender who has the athleticism to be a factor. Isnt as disruptive as he has the potential to be in the short-run. Displays very average intensity. Has the quickness to defend the perimeter and the size to defend the post. Doesnt have great success or hardship with either. Could be considered versatile in that way, but the results just arent there. Rebounds at only an average rate. Needs to be more disciplined and work harder to make an impact.
Read full article

Strengths
Athletic, versatile big man who can play multiple positions, score from both inside and out and is a mismatch every time he steps on the floor.

Villanueva moves very well for his height, 6-11, and can really get off the floor to block shots and finish in transition. He also has a pretty nice first step for a near 7 footer, aided by his long strides and good ball-handling skills. He can drive both left or right equally well. He can also handle the ball on the break and find the open man.

Has a very good body, big hands and an excellent wingspan, and that really comes to play in his rebounding and shot blocking. Thanks to his physical stature and athletic ability, Villanueva can really be a force down low defensively, especially by altering shots around the rim, and on the boards, when he puts his mind to it. A good weakside defender, rotates well to intimidate inside the post.

He has some developing post moves, especially a fadeaway hook shot and spin moves, aided by decent footwork which he uses to score around the basket if he can establish deep enough position (doesnt happen enough).

Villanueva is a good perimeter player with range out to the three point line. He is an excellent player to have in the high post because he is smart, can put the ball on the floor, hit the 18 footer, or find the open man with his above average passing skills. Cuts well himself to find the best angle to get open and receive the ball, works the pick and roll nicely.

A very unselfish player, almost too unselfish at times.

Weaknesses
Looks passive, disinterested at times, as if he's not giving 100%. Drifts in and out of the game and can be extremely inconsistent. Doesn't always play with the type of aggressiveness you would like to see out of a player with so much talent, although that's beginning to improve. Can get discouraged easily and lose confidence in himself, as witnessed by his extremely poor start to the 2004-2005 NCAA season with the Huskies.

Not a good man to man defender at all at this point. Has poor lateral quickness and footwork, especially on the perimeter as he often gets burned by his man if hes guarding someone smaller then him. This pretty much rules out him playing any Small Forward on defense, as the results would likely resemble Antoine Walker or Glenn Robinson.

Doesn't seem to mind letting his man establish deep position on him in the post, relying too much on his shot blocking skills (length+athleticism) that he thinks will make up for it and save the day time in and time out. Regardless to say, it doesnt always happen and most certainly wont in the NBA.

Not quite the force you would expect in the post just yet. Doesn't have a great post move he can rely on, often prefers to fade away and settle for soft stuff rather then taking the ball up strong. Adding strength would help in this aspect. Doesn't seem to be the most contact-loving player in the world. Footwork definitely needs to get better on both offense and defense.

While he's a good ball-handler, his dribble is a little bit high and I'm not sure that will fly in the pros. His decision making can be questionable as well, he doesn't always play to his strengths and can have a couple of wild lets give Calhoun an ulcer now minutes at least once a game.

Competition
2003 McDonald's All-American. Had 17 points and five rebounds in the game itself. Attended Blair Academy in New Jersey with Loul Deng.

Averaged 5 points and 2 rebounds in 12 minutes per game as a member of the USA's 2004 World Championship For Young Men Qualifying Team in Halifax, Canada.

Villanueva is part of probably the best front court in the country, with future lottery picks Josh Boone and Rudy Gay next to him. That both helps and hurts him because he can defer to the great talent he beside him and get passive (already a problem for him), but he also has great competition to go up against every single day in practice. He might be having an easier time then most college big men do because teams can't afford to double team him, and Villanueva is free to leave his man and try to block shots, knowing that he has one of the best defensive big men in the country in Josh Boone behind him to pick up the slack rotating and on the boards.

Outlook
Villanueva has a lot of potential, the only question is whether he can live up to it. I'm a bit skeptical myself, but someone is going to fall in love with his size, skills and athleticism I'm sure. If he can play like he has over the last month (December 22-January 19th) though, it's going to be tough to pass on him after things get murky outside of the top 4. Especially if your team doesn't need a PG.
Read full article