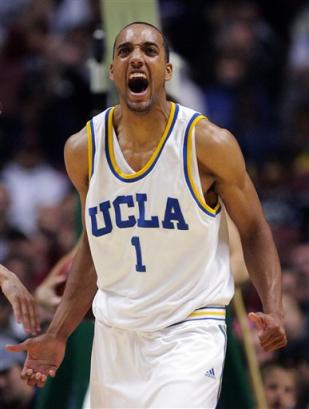 The most appealing thing about Thompson's game is his ability to create his own shot. While he's always shown the raw tools of a go-too scorer, this was the season that Thompson really began to make things happen for himself. He has a beautiful mid-range jumper that he will utilize in a variety of ways, whether it's a dribble-drive and pull-up, or backing his man down and turning around from 15 feet. He also uses his length to float the ball into the basket a bit closer to the rim.

Overall, Thompson just knows how to get his shot off, and is just as comfortable shooting the ball fading away or on the move as he is from a set position. This is the skill that could potentially make Thompson some money in the NBA.

Nonetheless, Thompson also has a very nice outside jumper. He will hit it when spotting up open on the wing, or with a man in his face. When he hits a few jumpers early, Thompson can really light it up, as a 39-point outburst on 13-18 shooting against Arizona State will attest. He can really put points up in a hurry this way, as he can be cold for large portions of a game but will then hit several in a row over the course of just a few plays.

Physically, Thompson has ideal size for an NBA wing, coming in at a fairly solid 6'7. He's not going to blow you away with a dynamite first step, but he is very crafty off the dribble and has that smooth athleticism that many great scorers utilize. Given his length, he certainly has the athletic tools to get by in the NBA.

While Thompson has often been derided for a lack of focus and effort (especially on the defensive end), this is an area where he has dramatically improved. Last season's attempt to enter the draft didn't go so well, and Thompson must have taken it to heart. As one of the few seniors on the team and one of the last remnants of the Steve Lavin era, Thompson picked up his consistency and intensity on both ends of the floor this season, and was a veteran leader on an NCAA tournament team. Not many people would have expected that from Thompson coming into the year.

One area where this really shows up is his rebounding, where he went from averaging 4.9 per game to 8.3 per game in roughly the same amount of playing time. While he can be considering anything but a good defender, Thompson at least put it some effort on that end of the floor as well.


Weaknesses
While Thompson's strengths are clearly focused on offensive aspects of the game, Thompson's weaknesses come into play mostly on defense. There also remain some questions about Thompson's mentality, as players with superb raw scoring skills aren't tough to find in the league.

Thompson really struggles as a defender. And while it's doubtful that much of this has to do with his physical attributes, it is very doubtful as to whether he will ever be able to guard NBA-level wings with any sort of success.

Thompson has never been an aggressive, physical defender. That's ok, but he has never put in the basic effort needed to play even passable defense. While that changed a bit this season, Thompson was still caught with his pants down too often on the defensive end, losing his man on screens or while defending the weak side, or blowing assignments by attempting steals. Obviously UCLA coach Ben Howland has helped him tremendously in this area, but he is still far behind the curve from a mentality standpoint.

Thompson's overall mentality is still a bit of a question mark as well. Three years of listless, underachieving play can't be wiped out all at once. He still tends to disappear at times, and doesn't always play aggressively.

So much of his game is based on hitting a jump shot within the first couple of attempts, that when he doesn't connect, the rest of the night can be rough.

Thompson will start forcing the ball, usually on outside jumpers, and not attack the basket. That ability to create his shot, perhaps his most attractive professional attribute is pretty much thrown out the window. His defensive effort will wane as well.

You see these inconsistencies in a lot of young players. Some are talented enough to overcome them, and some never do. Thompson's ability to score has to be attractive to NBA types, but the rest of his game remains quite raw, especially when we are talking about a college senior.

Thompson has improved a lot of these weaknesses dramatically over the past year, but he was completely off the draft radar heading into his senior season. One has to wonder if he had already been written off in the eyes of scouts.


Outlook
Thompson will be an interesting player to follow on draft night. There might not be a wing coming out of college in this draft that has the natural scoring tools of Dijon Thompson, but that might not mean much as far as getting into the first round. Several other upperclassman wings have much more consistent, and infinitely more well-rounded games.

Thompson seems like the classic prospect that a team could fall in love with and surprise some people by taking him late in the first round, but he could also be a guy that falls pretty far.

Personally, I think Dijon Thompson has what it takes to be a very good scoring wing at the NBA level, but people would probably view it as a reach if he does end up getting some of that guaranteed money of the first round.

Comments
Thompson reminds of a young Ron Mercer, in that he can create his shot from anywhere and can light up the scoreboard in a hurry, but doesn't have the all-around game to warrant consistent starter's minutes. If you look at Mercer's career, coaches gave him some time to develop into an all-around player, but it never happened.

If Thompson ends up settling for the outside jumper and not attacking the basket, like he had a tendency to do in college, a Kareem Rush-type career is very likely. At 6'7, he is going to be able to hit the NBA 3-pointer accurately. It's a matter of whether he wants to become a complete player.
Read full article