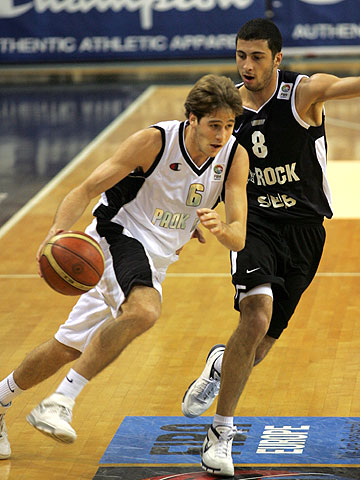 Luis Fernández
@DraftExpress
It had to happen sooner or later. With severe financial struggles, PAOK had been unable to retain its best players for several years now, and went into this season with a pretty weak squad. The historic Greek team was only able to collect a lone victory during the first eight games of the domestic leagues regular season. Thats why the last two consecutive victories have been so crucial, and why Dimitris Verginis leadership in those two games have a very special meaning. Thats why hes our Player of the Week.

Anyway, hes hardly NBA material at all. Hes not greatly athletic, he doesnt enjoy crazy size or length as his countrymen Diamantidis or Papaloukas, his defense looks rather average at best, hes not the best distributor around, and hes not a great scoring threat in traffic (his 40% average on 2-point field goal attempts is rather disappointing). Still, he can emerge as a very decent heir of the outstanding guard crop that the Hellenic country currently enjoys.
Read full article

Luis Fernández
@DraftExpress
Dimitris Verginis erupted this weekend for a 26-point performance in the Greek League against AEP Olympias, although his team PAOK continued its lackluster season with another defeat. Verginis is a finesse 6-4 point guard born in 1987. An average athlete but a solid ball-handler, his jumper emerges as his main strength. He enjoys three-point range, actually crediting a solid 42% this season, and hes able to shoot off the dribble while barely losing effectiveness. Not very explosive, nor aggressive, its not common to see him attacking his match-ups. Actually, although a nice decision maker, he doesnt take many risks on the court, and its also applicable to his passing game. Hes not a guy who often tries to attract defenses to leave a teammate open or looks for definitive passes, but instead will usually settle for easy open options. Indeed, he only averages 1.4 turnovers to go along with 11 points and 2.1 assists. An underwhelming defender, Verginis is not oozing with potential, particularly NBA-wise, but he may very well become a very good player on the European scene.
Read full article