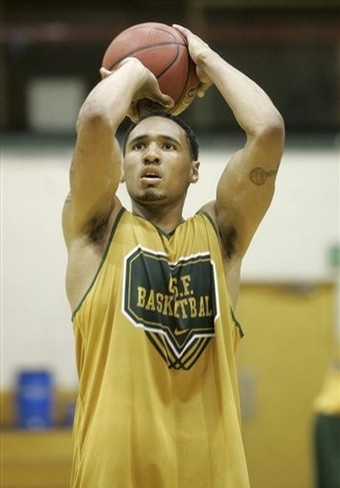 Joey Whelan
@DraftExpress
After a solid freshman campaign at Texas Tech, 67 power forward Dior Lowhorn transferred to the University of San Francisco. Two years later, in the midst of one of the most bizarre coaching situations in the NCAA, Lowhorn emerged as one of the top 20 scorers in the country, averaging 20.5 ppg on 51.3% shooting from the field. Next season, Lowhorn must show scouts that he is not a tweener and can make the transition to the perimeter full time at the next level. At this stage, however, it seems as though the odds are firmly against him, as he still looks very much like a power forward prospect with a face-up game.

Physically, Lowhorns tweener status is obvious. Standing at what might be a shade under 67, with a 230 pound frame and an average wingspan, he is short for a power forward in the NCAA, let alone the NBA. Similarly, he lacks the explosiveness and overall athleticism of a prototypical NBA wing player. This does not help his prospects play on the perimeter at the next level, and will likely hinder his transition at this level.

Offensively, Lowhorn is a much more effective basketball player when he plays in the post. Possessing solid quickness and footwork, he is able to create space for himself to operate. Once he is open, he has a variety of different scoring moves, from a solid turnaround jumpshot to a baby hook. He also shows nice touch from the field, possessing a streaky spot up jumper with range out to the three point line.

As evidenced by 51.3% field goal percentage and his 25.7% three point field goal percentage, he gets less accurate the farther he gets from the basket. That being said, however, he shows nice potential with his perimeter jumpshot, with a fluid, albeit slow and deliberate release. The problem seems to be that he does not show the greatest shot selection from the perimeter and rarely gets open looks. This hinders his ability to get into his motion, and his form and percentages suffer as a result.

Lowhorns shortcomings as a prospect largely revolve around his lack of a perimeter game. He has some moves facing the basket, but because his ball-handling skills are very much a work in progress, he has trouble consistently putting the ball on the floor and attacking the basket. His first step is not the greatest either, but considering his size and strength, he is effective once he gets into the lane. Similarly, before he can call himself a combo-forward at this level and a potential small forward at the next level, he must develop a mid-range game. These are significant improvements, however, and there are very few combo-forward prospects who actually expand their offensive repertoires accordingly.

Defensively, he also seems face a difficult transition to the wing. He lacks the footspeed and lateral quickness to stick with wings and guards, and lacks the wingspan to compensate for his lack of elite athleticism and timing. Another area in which he must improve is his focus. He often loses his man around screens and is late on rotations.

One area in which Lowhorn excels at this level is as a rebounder. Whether or not his skill will translate to the next level is questionable, even though he has above average quickness in the post, has some nice fundamentals, and uses his size and strength accordingly. Without NBA caliber size and athleticism, however, he might struggle at the next level.

Dior Lowhorn is one of the top mid-major scorers in the country and certainly had one of the better sophomore campaigns in the NCAA. His potential at the next level hinges solely on his ability to transition to the perimeter, which at this point is very much up in the air. Thus, the ball is in Lowhorns court. Last season he finished in the top 10 in the country in offensive touches, responsible for over 27.4% of his teams possessions. With a coaching situation that is likely more stable than last years, it is up to Lowhorn to continue to expand his offensive game out onto the perimeter and develop into a more versatile scorer.
Read full article