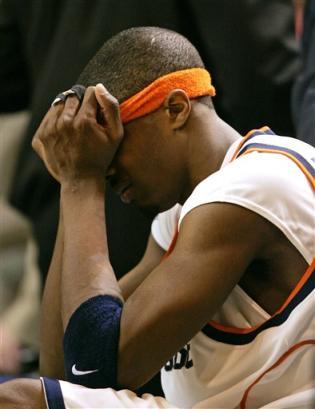 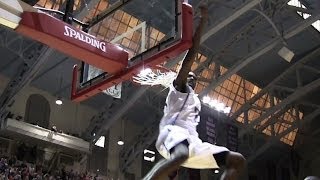 Eric Weiss
@DraftExpress
Overview: Warrick has steadily developed his game since coming into the league. Warrick has played multiple positions for Memphis, as his length and athleticism make him a versatile defender. Warricks offensive game has really started to progress as well. He is hitting his jump shots and handling the ball at a decent clip now, which is opening up his ability to score the ball. Warricks rebounding has really begun to be an asset, especially when playing close to the basket. He will likely always be considered a tweener, though, which might limit his ability to play big minutes on most teams, unless he continues to make substantial progress on his shooting and ball-handling skills.

Offense: Warricks offensive game really begun to blossom in his third season, catching up to a certain extent to his superb athleticism. His catch-and-shoot jumper is still a work in progress, but its consistent enough to be used as set-up weapon for his drives, even if he has a tendency to fade away unnecessarily on his shot. Teams tend to back off him at times still, so continuing to improve this part of his game will be key. Warrick handles the ball low to the ground and uses shot fakes to take a dribble or two before taking off for the basket, clearly preferring to go left. Better control and rhythm off the dribble will be needed to improve his pull-up jumper, which is still very weak. Despite his lack of upper-body strength, Warrick is a great finisher at the basket thanks to his high-flying leaping ability, and is learning to draw fouls as well. He is pretty effective at facing up from the high post and using his quickness to get to the basket, having recently cut down on his turnovers substantially, which is a huge development as far as his game is concerned. He also has a limited, but somewhat effective post game, using unorthodox moves and athletic ability to free himself up for shots near the basket. His lack of strength and wiry frame makes it tough for him to make much headway though against stronger forwards. Warrick is not a very good passer, particularly out of double teams.

Defense: Warrick isnt much of a shot-blocker or ball-thief considering his physical gifts. But he challenges shots well when on ball and can be a pesky man defender when guarding on the perimeter. He is limited in effectiveness when playing power forwards due to his inability to deny post position or effectively use his body to knock larger opponents off-balance. Warrick shows potential at the 3 defensively, where his length becomes an asset. But Warrick needs to make a full commitment on the defensive end. Hes not very aggressive with his perimeter pressure and gets caught standing upright too often, which slows down his closing speed on shooters. A wider base when in his defensive stance would help him to contain drivers with more effectiveness.
Read full article

Strengths
A world class athlete, lightning quick and an unbelievable leaper. One of the most exciting dunkers in all of college basketball. Plays above the rim, gets off the floor in the blink of an eye, which helps him throw down monster alley-oops and ferocious put backs. Runs the floor extremely well, and will often beat his man up the floor.

Weaknesses
His outside shooting has a long ways to go, will really need to work on this skill to eventually become a starting caliber NBA Small Forward. He has only hit one three point shot in his collegiate career so far. His midrange game has been somewhat inconsistent as well. These are his biggest knocks along with his ball handling skills. Warrick does not look very good putting the ball on the floor while penetrating from the perimeter and it's uncertain whether he'll be able to create his own shots on the next level.

Many have questioned what his true position in the league will be, as he has mostly Power Forward skills but the body of a Small Forward. His back to the basket skills are much more developed then his face up game, and he will really need to be matched up with a Power Forward that compliments his skills on both ends of the court to be most effective.

Syracuse plays a lot of zone defense, so it is hard to predict just how good of a man to man defender he will be. He has good footwork but it is obvious that he has a bad habit of biting on pump fakes attempting to block shots. He will probably struggle initially on defense, but it seems he has what it takes to became adequate at the very least if he is interested.

Prefers to defer to others, which strengthens the notion that he will be more of a solid role player in the League and not a star. Not very vocal with his teammates, often lacks aggressiveness and has trouble maintaining a consistent level of intensity on the floor.

Needs to bulk up significantly, since he isn't a perimeter threat just he'll probably need to go inside to cause damage in his first couple of seasons in the NBA. Right now he doesn't have much of a problem in college, but it's not a stretch to say that he's going to be outmuscled by stronger and tougher opponents inside unless he puts on weight.

Could be a even better rebounder with his wingspan and athleticism, but doesn't always do a great job of boxing out, and some might question his overall toughness, as he tends to occasionally shy away from contact.

Competition
After Carmelo Anthony left for the NBA last season, all eyes were on Hakim Warrick to step up and fill his huge shoes for the returning National Champions. Warrick has lived up to expectations on his end, and then some, although Syracuse is not having the best year and is on the bubble right now (middle of February) to make the NCAA tournament.

Outlook
Warrick will most likely come out this year barring a serious injury. In terms of potential, Hakim is a top 10 prospect in any draft. Even though he is a Junior, his game is still very raw and if Warrick indeed has the desire to improve like many think he does, he will be a very special player in the NBA.

Comments
While I personally enjoy watching Hakim Warrick almost as much as anyone else in the NCAA right now, I don't think he will ever become a good enough perimeter threat to be counted on as a go to guy in the NBA that can deliver a basket when you most need it in the clutch. If your team ends up drafting him, you can expect him to get on Sportscenter very often, but you should not expect him to be a star player for team. Hopefully Warrick will end up proving me wrong.