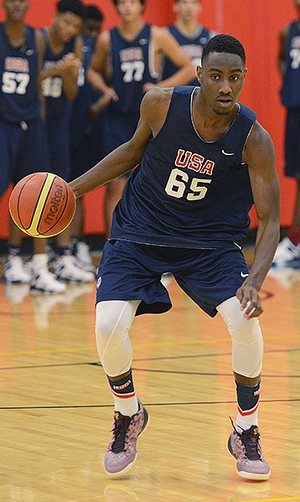 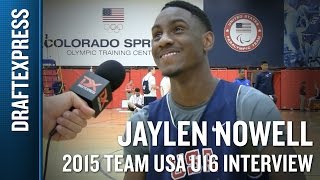 Mike Schmitz
@Mike_Schmitz
Somewhat stuck in between positions at just 6-2 without shoes, albeit with a solid 6-6 ½ wingspan, Jaylen Nowell (#23 Scout, NR ESPN, #24 Rivals, #40 24/7) had a steady week of practices and ended up making the final 12-player roster, taking advantage of the group's distinct lack of depth on the wing.

The Seattle native is somewhat of a jack of all trades at this early stage, showing the ability to knock down shots with his feet set and off the dribble, and also being capable of creating his own offense with nice scoring instincts, footwork and some ball-handling ability. At 176 pounds, his body has a ways to go as you would expect from a 15-year old, but he showed a solid feel for the game and a competitive spirit over the course of the practices, which undoubtedly helped his cause considerably in making the team.