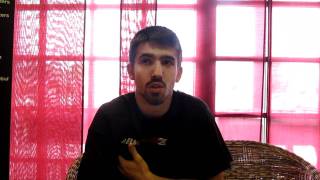 Bradley Thayer
@DraftExpress
Another player who sat, due to a tweaked back that he suffered when getting smacked into on day two, was Josep Franch. Franch, a Spaniard who spent last season playing with DKV Joventut in the Spanish ACB league, actually showed pretty well in the first couple days of the camp. At times he made some spectacular, flashy passes, occasionally resulting in turnovers, but on the whole he really ran Team 3 well.

The 20-year old is a crafty player, and he also showed some very good creativity when getting into the paint and forcing the defense to collapse on him. He plays the game at his own pace and shows very nice timing running the pick and roll, always looking willing to make the extra pass.

At nearly 6'3 without shoes, he's got great size for a point guard, even if his narrow frame, average wingspan and underwhelming athleticism may limit his potential to play in the NBA or as a starter at the highest level in Europe, particularly on the defensive end. He must improve his ability to score efficiently inside the arc if he wants to prove otherwise.

We sat down and talked with Franch about his experience in Treviso, his season in Spain and what the future holds for him

Matt Williams
@DraftExpress
David Jelinek has been the more prolific from beyond the arc, but Josep Franch has been the more productive player for DKV Joventut in the early going. Spending many of his minutes playing on the ball, Franch is much shiftier with his dribble than Jelinek, and does a nice job using screens to create openings to get in the lane. Once there, Franch is a bit limited due to his lack of great leaping ability and skinny frame, but he isn't afraid to take contact.

An aggressive and sometimes flashy passer, Franch is prone to trying to make some tough passes in traffic, but looks very good running the show in transition. He isn't terribly explosive, but he plays at different speeds, has a fundamentally sound jumper, and proves fairly savvy with the way he distributes the ball. Moving forward, it will be key for him to cut down on his mistakes and find a way to alleviate his struggles as a finisher around the rim, but the young point guard will get ample opportunities to continue improving his game while getting consistent minutes in the ACB. From an NBA perspective, it is easy to write off Franch because of his average physical tools, but his fundamentals and effort level could make him a terrific prospect in the European game as he becomes more poised as a floor general.
Read full article

Jonathan Givony
@DraftExpress
This was a good, but not great showing from Spanish point guard Josep Franch, appearing to tire a bit as the week wore on, and not really a factor in the later stages. A fundamentally sound point guard with average physical tools, Franch showed some excellent ball-handling skills throughout the week going left or right, and a solid command of running the pick and roll. He is skinny, with extremely short arms, and just decent quickness, but has a nice sense for changing speeds and thus did a pretty good job getting to the rim in this setting. He tries some very risky passes at times, making him a bit turnover prone at times, but for the most part is pretty impressive running an offense considering his extreme youth, and seems to exert some effort on the defensive end as well, even if his potential here seems limited due to his average physical tools. Able to hit a jumper from mid-range, he looked more content setting up his teammates than looking for his own offense.
Read full article

Luis Fernández
@DraftExpress
Easily the most creative player in the entire tournament, Josep Franch is a very talented point guard for whom the game comes very easily. Listed at 6-3 (he looks slightly shorter), hes nicely quick and takes advantage of his excellent ball-handling skills to operate on the court with ease. The most eye-popping ability he displays is his passing game, often spectacular, even eventually flashy. He enjoys excellent court vision and finds his teammates effortlessly, showing a wide array of different passes executed with either hand. Indeed, hes automatic translating his dribble into a pass. Hes so confident that he sometimes overdoes things trying passes in the air that he still hasnt decided on before leaving the ground, therefore risking a turnover that sometimes inevitably comes.

Another greatly interesting skill that Franch enjoys is a very solid mid-range jumper he can easily net, even in off-the-dribble mode. Not being very big and neither extremely athletic in order to consistently attack the basket, its very useful for him to be able to rely on a solid jumper. He has three-point range, but didnt look as reliable here. An able defender, he shows good lateral quickness.

Franch usually practices with Joventuts first team, and he kept reporting during the tournament, which likely hurt his level of performance to some degree. Anyway, his basketball talent is too obvious to hide, even under a shade of fatigue.
Read full article