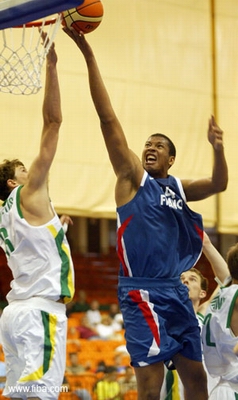 Jonathan Givony
@DraftExpress
Vaty came into this camp billed as one of the more productive big men in attendance, but ended up being mostly a complementary player for his team. Vatys main appeal lies in his physical attributes, as he has decent size for the power forward position to go along with an excellent frame and wingspan, not to mention strong athletic ability. Most of his game revolves around his strength and athleticism, as he lacks great polish offensively, particularly in the low post, where his footwork appears limited. Vaty nonetheless plays hard and can emerge as a strong rebounder and capable defender, he runs the floor hard and finishes well around the basket. His feel for the game appears to be average, though. Vaty probably didnt do a great deal for his draft stock with his showing in Treviso, but hes still a guy to keep an eye next year on if he decides to withdraw his name from the draft.
Read full article

Luis Fernández
@DraftExpress
A complimentary player for France, Vaty primarily used his big strong body in the low post. His go-to move was the turnaround jumper off the low post, which he nicely executes with a fluid move and solid mechanics. His hook shots still dont look very reliable, although he shows increased poise evolving on the lane, showcasing better footwork. Anyway, his game keeps looking rather center oriented. Although capable of netting mid-range jumpers with decent consistency, he doesnt show great range. Besides, hes not much of a ball-handler, and hes only effective attacking his match-up if hes in the mid-range area and needs just one or two dribbles to get to the basket, actually showing nice quickness in the process. Solid on defense and rebounding, physically hes a pretty mature guy ready to challenge almost any level of competition. As always, in terms of NBA potential we still think hes a bit short and not that athletic for the kind of game he displays, although he still has good enough tools to eventually make it to the league as a role player.
Read full article

Luis Fernández
@DraftExpress
Vaty seems to be losing step with his generation teammates. He was easily the most impressive guy on the French team a couple of years ago, but hasnt improved as much as expected ever since. Vaty relies mostly on his awesome physical strength. He has excellent shoulders crowning his remarkable upper body, while his legs doesnt lose track. Hes an athletic guy, not anything spectacular, but good enough for a power forward. However, he seems to lack a bit of reactivity; as his first impulse doesnt always come as quick as desired.

His skill set is not on par with his physical exuberance. Hes an inside player who gets production basically only in the low post or shooting from the mid-range area. In general, hes not a guy who you feel the game comes naturally to. He rarely puts the ball on the floor, his footwork is average and he doesnt have too much of a soft touch around the basket. He establishes position easily down low using his body, and then likes to shoot turnaround jumpers or try to outmuscle his rival to get an easy basket near the rim, although he often suffers to get the job done (meaning, to finally put the ball inside the rim) despite having everything in his favor. Also, whenever he tries any complicated moves, he usually gets into trouble, exposing his poor footwork and handles, while showing average coordination.

On defense, his size and strength help him a lot, but his lateral movement is nothing out of this world. He helps in the rebounding and shot-blocking departments, but hes not great at any of them, probably because he isnt a super-active guy and his timing is average.

Disappointing might be the best way to describe his performance. Its more a matter of expectations than bad play. After all, he was an important inside player for the championship team. Anyway, he will need to work hard on his game for the future, particularly on the basic fundamentals.
Read full article