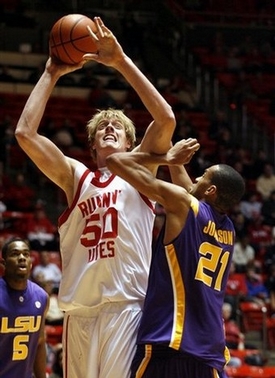 Matt Williams
@DraftExpress
 Luke Nevill is huge, and was an excellent finisher at the rim in the Mountain West, but his physical limitations may make it difficult for him to contribute in the NBA.

Nevill got almost 4 touches per game at the rim as a finisher and shot 81% on those attempts, good for first amongst all the players we looked at. Clearly, his size and touch were simply too imposing for many of the centers he matched up with. He also got 8.5 possessions per game on the block, almost 55.5% of his offense. He scored .95 PPP on his touches, good for second amongst centers, but just above the average of .94 for power forwards. The news is not all good on Nevill though, as his 1.1 possessions per game from offensive rebounds ranks him fifth amongst the players on our list, and considering his size, level of competition, and the fact that many of the players on our list aren't legitimate prospects, that really is not a good sign. Nevill did get fouled on 19.6% of his half court possessions, the second most of any post player on our list. Nevill wouldn't be anything more than a third center in the NBA, but his finishing ability and size may give him a chance to be drafted.
Read full article

Joey Whelan
@DraftExpress
For the past four years, Luke Nevill has been a fixture on the court for Utah, and he has put together his best season to date for his senior campaign. The Australian native is posting career bests in nearly every major statistical category after his numbers took a bit of a dip during his junior season.

At first glance it is easy to see why Nevill draws the attention of pro scouts; at 72 and (generously) listed at 265 pounds, the true center has a frame with the potential to play in the paint at the next level. While his girth allows him to establish position consistently against most opponents at the collegiate level, he absolutely needs to get stronger in his upper body to handle the rigors of stronger defenders in the NBA. In addition to his massive frame, Nevill runs the floor reasonably well for a player his size, but overall doesnt possess much athletic ability. He doesnt elevate well at all and his lateral quickness is quite poor.

As one would expect from a player of Nevills size, the vast majority of his shots come within the immediate vicinity of the basket. According to Synergy Sports Technology, nearly two-thirds of all his shots are in the post. At the Mountain West Conference level, the senior doesnt have much trouble establishing position on the block, but he becomes extremely predictable when catching the ball with his back to the basket. Nevill almost exclusively turns to his left shoulder, relying on a right handed jump hook shot. On occasion he will rush this shot and line drive it at the rim, but in general he shows a very soft touch around the rim. The biggest key for Nevills development in this aspect of his game is to diversify his repertoire of post moves. His predictability makes him more susceptible to being overplayed on one side by defenders and for the ball to be stripped when opponents know which direction he is going with it.

The rest of Nevills baskets come from a combination of his work on the offensive glass and his sheer size advantage over defenders. He receives a lot of lob passes over the top of smaller opponents, and thanks to his soft hands, he is able to capitalize on many of these scoring opportunities around the rim. His offensive rebounding numbers are solid, at just over 3 per forty minutes, but again, this is more due to his size as opposed to his athletic ability.

Nevill almost never steps away from the basket offensively, but from the few shot attempts we have seen, he has the potential to make this a regular part of his game. He stroke is very smooth and his 77.6% free throw shooting only further confirms that the big man has the ability to shoot from mid-range. Continuing to work this into his game would go a long way to helping Nevills prospects of breaking into the NBA, as he wont be able to bully defenders like he does in college. Its understandable why Utah would want him shooting all of his shots as close to the rim as humanly possible (he does convert 62% of his field goal attempts after all), but since he obviously will be going up against a different caliber of big man in the NBA as opposed to college, it would help him to show somewhat of a more diverse offensive package.

As a defender, Nevill doesnt do a whole lot to completely separate himself from the pack. He does average nearly three blocks per game but from what we have seen, opponents are still able to shoot over him consistently due to his lack of ability to elevate. When forced to step outside and guard smaller players we really start to see some of the physical shortcomings of Nevills game. His lateral quickness isnt strong enough to guard many players at the college level, so there is plenty of reason to think that this will be an issue in the professional ranks as well. Defending the pick and roll is nearly impossible for Nevill with his lack of footspeed, and playing zone is obviously not as attractive an option in the NBA as it is in college.

Nevill is going to get plenty of looks from pro scouts simply based on his size and soft touch around the basket. He is an extremely efficient player who is the focal point of a good team in Utah, which will only further help his case. His subpar athleticism is going to be a strike against him, as is his very vanilla post game, but neither of these are preventing him from being a force at this level. Nevill could hear his name called in the second round just as easily as he could go undrafted, but he will almost certainly get some very serious looks in summer league and training camp regardless of what happens.
Read full article