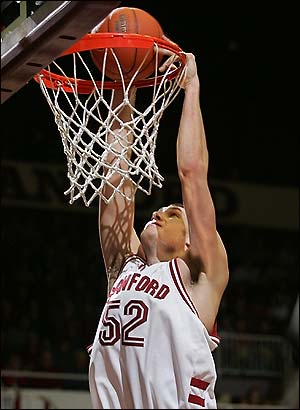 Eric Weiss
@DraftExpress
Harysaz is only worth mentioning because of how much of a disappointment hes been in this camp so far. His production has been paltry just as much as his effort has. He has not shown any discernable skill here to separate himself from any of the players here, not in his shooting, not in his post-up game, not in his rebounding, and certainly not defensively. Beyond the fact that he is not really getting many touches, he has not shown exactly how hed be able to get off the bench for an NBA team.
Read full article

Mike Schmidt
@DraftExpress
Matt Haryasz is a player that we haven't discussed much recently. It is well past time, given his recent stretch of impressive production. Despite being his team's only post option and only real go-to scorer, Haryasz had reeled off 6 straight games of 22 or more points and come up with 4 double-doubles during that stretch, before an errant Oregon State elbow sent him to the sidelines early and broke the streak. Not surprisingly, Stanford won 5 of those 6 games, and is now right in the thick of things in the Pac-10.

Last season, Haryasz played the role of a high-post, finesse type PF, as Rob Little was the space eater in the middle. Haryasz added significant bulk in the offseason, and is now strong enough to compete with college-level bigs in the paint. He has good size, decent athleticism, and a nice array of post moves to work with. His best attribute at the moment would be his rebounding, as he really understands how to get position in the paint.

While Haryasz is far from a sure thing in the NBA, there is a lot to like about his game. He probably isn't strong enough to play center in the NBA, but still can add more strength to his frame. He projects to be a complementary big man at the next level, using his perimeter skill to draw defenders away from the basket, while contributing on the glass. The injury issues are troublesome, especially the nagging foot problems he has been dealing with for some time. Nonetheless, if Matt Haryasz continues his recent standout production and leads the Cardinal to an unlikely NCAA tournament appearance, a second round selection is very possible.
Read full article

One of the most improved players in the conference a season ago, Haryasz is a finesse big man with the combination of size and skill that will keep the scouts intrigued. He will hit the outside shot, but is also comfortable on the lows blocks and from the baseline. Haryasz is also an accomplished rebounder, averaging over 9 rebounds per game last year. To have a legitimate chance at the first round, Haryasz will have to bulk up a bit. Right now, he probably doesnt have the physical strength to play C in the NBA. However, after a little bulking up, Matt Haryasz likely will look the part of a nice high-post big man.
Read full article