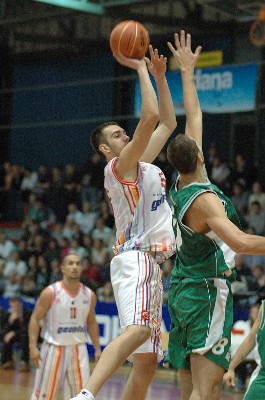 Jonathan Givony
@DraftExpress
One of the most pleasant surprises and notable performers thus far in the Euroleague is Slovenian center Mirza Begic. Not long ago a marginal draft prospect -he actually went undrafted in 2007- hes developing into an extremely productive big man (averaging 16 points, 7 rebounds and 3 blocks in 23 minutes in the Euroleague), showcasing the kind of back-to-the-basket skills that are so rare to find nowadays among big men.

Theres no wonder that Begics most intriguing abilities revolve around his low-post game. Begic takes advantage of his superb length, showing solid footwork, body control and consistently connecting on his hook shots (preferably with his right hand). Certainly not a hustler or a banger, he doesnt avoid contact down low, showing good hands to catch the ball, a good feel for the game, and decent quickness executing his moves. When you package all these abilities in a 7-3 body, you know hes going to do some serious damage.

Still fairly skinny, much of the progress he has enjoyed as of late is consequence of his body development, as he looks now visibly stronger, which allows him to take contact and operate much more comfortably around the basket. Besides, despite his great size he can get off the floor or run the court reasonably well, even if his limited quickness emerges as one of his shortcomings on the defensive end (the biggest one might be a certain degree of softness). Anyway, hes a solid rebounder, a fairly intimidating presence on the paint thanks to his length.

Well see how the season unfolds for Begic. Despite his Euroleague achievements, his performance at the Adriatic League appears to be significantly less consistent. Hes always carried a rep for being somewhat of an underachiever throughout his career, as he reportedly is not the most enthusiastic worker around, so it will be interesting to see if he can maintain his extremely hot start. Anyway, if he shows some solidity in his outings, chances are he wont be playing for Olimpija next season, as someone will throw significant money his way in the search for quality size on the paint. In fact, considering that his contract is up this summer, there is some talk that he may be bought out by a rich team in Spain or Russia this season already. And if he keeps developing, the NBA is not out of the question.
Read full article

Kristian Hohnjec
@DraftExpress
Mirza Begic has finally seen some meaningful playing time at the senior level, after just being a token member of Virtus Bolonga for the past few years. While his team was not really competitive in the Adriatic league, Begic certainly made good use of the playing time he got.

Begic has a very good shot at getting drafted somewhere in latter part of the 2nd round, mainly because of his enormous size as well as the good attitude and improvement he showed throughout the season. Even if he is already 22 years old, Begic is a player that is far from reaching his potential. If he works on his body, he could develop into a useful NBA player down the road.
Read full article

Luis Fernández
@DraftExpress
Mirza is definitely emerging as a serious candidate for the second round considering his enormous size and soft hands. Begic towers over opponents and collects rebounds with ease, often he is able to snatch the ball even when he doesnt establish proper position. He also shows good reactivity and touch, putting the ball in the basket immediately after receiving a pass or catching an offensive rebound. This is sometimes a problem with the players of his size -reactivity and reflexes- but Begic is fine as far as that area is concerned. Overall he is a decent athlete, runs the court pretty well, has solid footspeed and is well coordinated. His upside lies in his work ethic, intelligence and feel for the game. Begic has soft hands for a big man, and hes a decent shooter from the mid-range area, even if his mechanics are not the fastest, he doesnt have much problems releasing his shot considering his size.

The biggest downside for Mirza is his strength and frame; it doesnt look like he will be able to put enough weight on. He looks like a Shawn Bradley from that standpoint. Another weakness is that he needs his teammates to create scoring opportunities for him; he is good at converting, but struggles to create his own shot. If he continues to put up solid numbers for Geoplin Slovan, Begic will get serious looks from the teams drafting in the 2nd round. He can be stashed in Europe for development until he is ready to step on the NBA court.
Read full article

New Pearls in the Adriatic Sea

Kristian Hohnjec
@DraftExpress
What Begic has cannot be taught - gigantic size. He is a legitimate 7-foot-3 Center with an equally impressive wingspan, solid coordination and decent athleticism for his size. It is a give in that the players of his size get long hard looks in the NBA draft (Ramon Van Den Haare, Cheikh Samb, Martynas Andriuskevicius, Slavko Vranes, Nedzad Sinanovic etc.) , even if they don't necessarily achieve much on the court.

Mirza has had a lot of troubles with injuries so far in his career, and now he is finally seeing consistent minutes at the mid-major European level, for the first time in his career. Since he will be automatically eligible for 2007 NBA draft, he doesn't have much time at his disposal to show scouts that he is worthy of a draft pick. Begic has being loaned to one of worst teams in the Adriatic league - Geoplin Slovan - from legendary Italian giant Virtus Bolonga, where he couldn't crack the 12-man lineup. So far, he's averaging 8.6 points, 5.8 rebounds and 1.6 blocks in 20 minutes per game. Like his teammate Preldzic, Begic was also impressive for Slovania at the U-20 Championship, this time in Russia, averaging 14.5 ppg, 8 rpg, and 5.5 bpg. He surely gathered some interest from the NBA scouts there.

Begic uses his terrific size to come up with plenty of blocks and rebounds. Mirza is more skilled in the shot-blocking than the rebounding department currently and is showing solid anticipation and timing to swat shots away. He is especially effective coming from the weak-side. As already stated, Begic isn't a particularly skilled rebounder, getting his fair share of captures because of his height, but often not boxing out his opponents and lacking strength and toughness on the glass.

Speaking of strength, this seems to be most concerning factor for Begic. Being 21 years old already, Mirza is an unbelievably weak player. His legs are one of the thinnest you'll find and his upper body looks frail too, without much potential to fill out. All of this makes Begic very prone to the injuries, as well as limiting his upside to improve on his weaknesses.

On the offensive end, Mirza shows solid footwork and decent touch around the basket. He is able to release a hook shot with either hand, and this seems to be his only reliable source of scoring. He shows good enough hands and touch around the rim finishing with acceptable results. Occasionally, Mirza will pull-up from the mid-range area, but his percentages here are poor, even if he shows some fluidity in his jump shot.

Essential for Mirza is to get as strong as he possibly can, which would help improve his questionable durability, as well as his overall game. Begic reminds a lot of former Raptors bust Aleksander Radojevic. A couple of years ago he could have possibly cracked into the first round thanks to his pure size and potential, but at this point a 2nd round selection is the best he can hope for unless his production in the Adriatic league really takes off.
Read full article