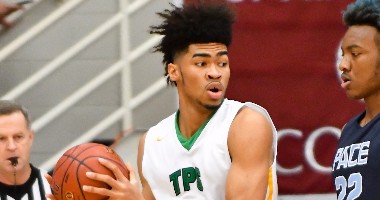 
Strengths
-Strong physical profile for an NBA center prospect at 6' 11.75 in shoes with a 239-pound frame, 7' 3.75 wingspan and decent 9' 0.5 standing reach.
-Super agile for his size. Can really run when motivated. Able to sit down and slide laterally. Nimble diving to the rim out of pick and roll.
-Good leaper in space. Lob target. Can finish above the rim.
-Tools help him on the glass. Excellent rebounder when his motor is running high. Lifetime 14.3 rebounds per 40 minutes. Quick off the floor.
-Shows potential as a rim protector. Solid timing. Long arms. 3.4 blocks per 40 minutes.
-Flashes of touch on the offensive end. Can make a right-handed jump hook when he's playing under control. Occasional quick rip throughs, spins and left-handed jump hooks. Gets good rotation on his free throw stroke. Has some untapped offensive skill.
-Has the feet to develop into a pick and roll switch defender as his fundamentals and awareness improve. Recovers to blocks at therim if beat. May be able to check some bigger fours in time.
-May be able to develop into the rim running, switch-capable, rim protecting five man that NBA teams covet.

Weaknesses
-Motor runs hot and cold. Gets down on himself easily. Doesn't sprint back on defense after mistakes. Very laid back demeanor in general.
-Feel for the game isn't great. Doesn't see the floor at a high level. Strictly a five offensively. Lifetime 0.7 assists per 40 minutes. Struggles to react to stunt men. Not going to put the ball down from the perimeter. Very sped up in the post. Will take off-balance jump hooks with range early in the clock. Still figuring out who he is as a player.
-Defensive fundamentals have room to improve. Too upright guarding pick and roll. Doesn't give himself enough room to keep the ball in front. Reaches on the perimeter. Not as physical as he could be guarding the post. Bites on fakes.
-Can do a better job finding a body on the defensive glass. Relies more on tools than fundamentals. Can improve his discipline there.
-Overall offensive skill set has room to improve. Hands are a bit shaky. Can he develop into more than just a dunker, offensive rebounder? Touch is very inconsistent. Solid free throw stroke but mid-range jumper is slow and quite mechanical.
-Body language can improve.

Outlook
Richards had a couple very strong days of practice in Portland, flying around on both ends of the floor and showing flashes of touch while measuring really well for an NBA center prospect. Consistency in terms of effort and decision making will be key for Richards. He may have his struggles staying on the floor at Kentucky during low-motor bouts, and he'll have to find a way to defend without fouling while keeping things simple offensively. If Richards is able to buy into his role and put in the work to develop on both sides of the floor, he could have an impact in a Willie Cauley-Stein type role for the Wildcats after a couple years of development.
Read full article

DraftExpress
@DraftExpress
Kentucky commit Nick Richards has grown a bit since last summer and posted the highest standing vertical leap among players in this group, a fairly impressive feet for a center.  His 30 inch standing vertical leap ranks among the top marks recorded by a center all-time.  Having grown a bit and packing on some muscle since last summer, Richards is one of the more impressive big men from a physical perspective in the high school game at this point.
Read full article

Queens native and 2017 high school prospect Nick Richards' long-term future is bright thanks to his ability to do four simple things  protect the basket, rebound, rim-run, and finish.

Richards doesn't have a flashy game. He plays five feet and in, and lacks a mid-range jumper or really any semblance of a post game. But he has those four key factors down pat, and with a strong frame, a 7' 2 wingspan and above average athleticism, he possesses the tools and necessary skills to have a long professional career.

Richards finished the tournament averaging 18.4 points, 13.5 rebounds (6.1 offensive), and 3.7 blocks per 40 minutes pace adjusted on 68% from the field and 44% from the line. Richards did most of his damage on the defensive end, where he protected the rim by way of good timing and impressive leaping ability from a standstill. With a strong upper body and fairly thin lower body, Richards did a solid job defending the post and holding his own on the block. He got moved by some of the stronger bigs at the tournament, but was able to bail himself out thanks to his quick first jump and solid length.

Perhaps more impressive than his interior defense was Richards' potential as a pick and roll defender. He isn't perfect fundamentally, and has a tendency to get in foul trouble easily, but most 7-footers aren't supposed to move the way Richards does. He's unbelievably light on his feet, can hedge and recover, contain, or switch screens and contest. All in all Richards has the tools to be a complete defender, which every college and NBA team is looking for at the center spot.

Offensively, Richards is more or less a rim runner, offensive rebounder and dunker at this stage. He runs the floor like a wing and plays with a solid motor on the offensive end. Richards puts constant pressure on defenders to put a body on him with his aggressiveness on the offensive glass. Although his hands can be hit or miss, Richards is a quick leaper who doesn't need much time or room to gather. He hammered home a couple of highlight dunks, and should be able to finish over length with relative ease in college and beyond.

Outside of rim runs, put backs, and dunks, however, Richards is very limited offensively. He lacks touch, feel, and any sort of post game. He air-balled at least one jump hook versus length, and is very uncomfortable catching in traffic. Richards' footwork is rigid and he doesn't think the game all that quickly, something that should improve with more experience. Richards also struggles from the free throw line, sporting a fairly mechanical stroke in which the ball oftentimes barely gets above the rim.

Richards may never be a prolific offensive threat, but he's a ready contributor in some of the main areas that coaches are looking for out of a center and defensive anchor. It will be interesting to see if the rest of Richards' game can catch up with his already high-level skills.
Read full article