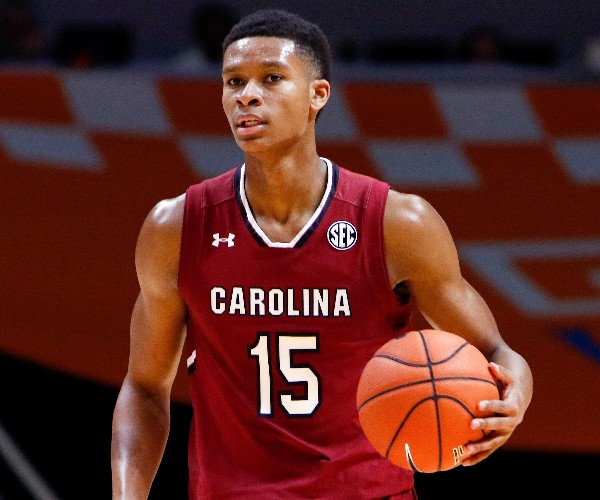 Former South Carolina Mr. Basketball, out of Spring Valley High School, P.J. Dozier turned down scholarship offers from Michigan, North Carolina, Georgetown and Louisville, electing to stay in home and play under Head Coach Frank Martin. After an up and down freshman season, Dozier became a major piece for a South Carolina team that made an improbable run to the NCAA Tournament Final Four, and fell just short of a National Championship appearance.

From a physical standpoint, Dozier has an elite set of tools that allow him to impact the game in a variety of ways, most notably with his versatility on the defensive end. At the 2017 NBA Combine, Dozier measured just under 6'7 with shoes, weighed in at 201 pounds, and posted a wingspan of 6'11. Those tools, combined with a tremendous frame, give Dozier unique physical upside, who at just 20 years old should continue to grow into his body. He moves very fluidly with and without the ball, shows excellent bounce in space, and has an 8'5 standing reach which allows him to get above the rim or finish from extended angles around the basket.

Dozier doesn't yet have a true position offensively given his somewhat underdeveloped skill set, but if he continues to add polish to his game, he has the chance to be a utility guard who contributes as a facilitator, slasher and multi-positional defender.

Some of the upside surrounding Dozier on the offensive end of the floor at the NBA level is his potential to play as a big point guard or secondary ball handler. He is not yet a true point guard and has a ways to go in terms of developing as a decision maker and reliable lead guard, but the flashes he has shown as a ball handler and facilitator lend credence to the notion the he could function as a playmaker down the line.

He shows solid court vision in transition and uses his size well to see over the top of the defense in the half court, but he is not yet advanced in terms of pick and roll playmaking, something he would likely be asked to do as a primary ball handler at the NBA level. He is not yet a sound decision maker and struggled with basic point guard responsibilities like making post entry passes, but he does show glimpses of being able to facilitate and hit tight windows with impressive bounce passes. While he averaged 3.8 assists per 40 minutes, he also averaged 3.1 turnovers, a ratio that is way out of proportion for a guy who will likely be asked to come off the bench and potentially orchestrate an offense.

Dozier isn't an elite ball-handler, getting loose with the ball at times, but he shows some shiftiness particularly in the open court where he uses his long strides and size to get downhill and finish at the rim. It is in the half court where Dozier struggles most in terms of creating offense. He ranked in just the 20th percentile in isolation offense, and scored just .58 points per possession via isolation situations. His first step is just average, and while he shows the ability to play with change of pace getting downhill out of ball screens, he struggles to create separation in one on one situations, and generally just relies on his size to shoot over defenders.
He lacks touch on his mid-range jumpers and is inconsistent with floater finishes, so when he can't get all the way to the rim he has a difficult time converting on scoring opportunities. His limited outside shooting really prohibits him in the half court, as defenses can go under ball screens against him and shrink the floor. His most efficient sources off offense at the college level came in transition, as a cutter, and as an offensive rebounder, where he could best utilize his size and physical tools.

The biggest question mark about Dozier on the offensive end of the floor is his lack of perimeter shooting ability. As a sophomore, he shot just 28.5% from deep, on 3.9 attempts per game, paired with a 59.7% free throw percentage that indicates the concerns about his outside shooting skills are definitely warranted. He showed slight improvement from the 23.3% he shot as a freshman, but overall his touch and mechanics leave a lot to be desired. Dozier shoots with a long windup and has a very handsy release, and while he showed some potential shooting on the hop with time and space, he struggled in almost every other aspect of perimeter shooting. He has an effortful high arching shot and often struggles to release the ball at the peak of his jump, resulting in a lot of very short misses as he lets the ball leave his hands on the way down from his jump. His long windup and extended release make it difficult for him to get comfortable looks in quick catch and shoot situations. His inconsistency as shooter allowed short closeouts, which were difficult for him to attack or create out of. He had his moments as a capable spot up shooter off the ball during his sophomore year, but his transition to the NBA 3-point line will be something to monitor as he looks to expand on his offensive game.

Dozier has his limitations on the offensive end, but his upside as a versatile defender is what is most intriguing about him as an NBA prospect. In a League that places high value on length and multi positional defensive ability, Dozier brings a ton of value in those aspects of the game. At his size and quickness, Dozier has the ability to defend both guard spots and should be able to defend some wings in the future if he can continue to get stronger.

Dozier is disruptive on the defensive end using his length to get into passing lanes and cut off smaller point guards vision on the perimeter. He averaged 2.3 steals per 40 minutes and caused numerous turnovers out of isolation and pick and roll defense using his size to smother ball handlers and force them to kill their dribble. He stays engaged both on and off the ball and does an excellent job avoiding clean hits on ball screens or trailing shooters coming off screens. He is also able to impact the game as a rebounder from the guard spot, particularly on the offensive glass, where he uses his size and instincts to create second chance scoring opportunities. If Dozier can maintain consistency as an impact defender, it will likely be his calling card in terms of earning him minutes early on in his professional career.

P.J. Dozier showcased his potential over the course of his sophomore year and during South Carolina's run to the Final Four, and he carried that over to the NBA Combine where he gave scouts a glimpse of his versatility on both ends of the floor. Dozier will likely never be a go to option on the offensive end of the floor, but if he can continue to develop as a big guard who can facilitate and impact the game on defensive end of the floor, he has the chance be able to carve out a utility role at the NBA level.
Read full article

Jonathan Givony
@DraftExpress
South Carolina combo guard P.J. Dozier started off the season on a very strong note, shooting over 40% for 3 in November and December while demonstrating impressive versatility with the ball in his hands. Like South Carolina in general, his productivity and efficiency fell off a cliff once 2017 rolled around, as his perimeter shot completely abandoned him and SEC defenses figured out how to neutralize him.

Dozier has impressive physical tools and looks the part of a top flight prospect on first glance, but still has plenty of work to do on his skill-level, feel for the game and shooting. A big NCAA Tournament showing, playing in his home state of South Carolina, would be a nice way to salvage this season and give him some momentum heading into the NBA Draft process, should he elect to take that route.
Read full article 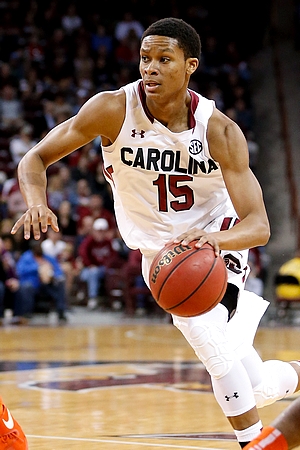 Listed at 6-6, with a sturdy 205-pound frame and nice length, Dozier certainly looks the part of a NBA shooting guard. A fluid, very bouncy athlete with decent quickness, it isn't difficult to see what made Dozier such a highly sought after recruit coming out of Spring Valley HS (SC) on first glance.

A regular starter until late in the season, Dozier finished sixth in points and third in assists for a balanced South Carolina team. Spending time playing both on and off the ball, Dozier struggled through some growing pains, scoring a dismal .636 points per possession, due to his 25% turnover rate and 23% shooting from beyond the arc. Nonetheless, he finished the year as one of just four SEC players averaging over 13 points, 6 rebounds, and 4 assists per-40 minutes pace adjusted.

The 19 year old rising sophomore is very raw on the offensive end at this stage. Though 44% of his shot came outside of the paint, he connected on just 26% of his attempts away from the rim, including 23% from beyond the arc. An unreliable set shooter who isn't too much more consistent pulling off the dribble, Dozier's mechanics don't look awful at times, but his lack of accuracy is the result of an inconsistent release point and lack of touch.

Able to use his physical tools to create a bit off the dribble, Dozier is a threat to finish impressively inside, and does show some ability to change speeds and create space, but his inability to make perimeter shots allows defenders to sag off him, making it very difficult for him to generate clean looks inside. Making 44% of his floaters and 53% of his overall half-court attempts in finishing situations, Dozier was most effective when he was able to catch his defender off balance and find lanes to the rim.

Dozier showed flashes of promise as a passer in the pick and roll, but his somewhat loose handle and unrefined decision-making limited his impact when creating offense on the whole. Seldom getting low on his drives and not showing much shake off the bounce, the young guard could stand to be more physical and patient both when slashing to the rim and when looking for the open man.

Defensively, Dozier fared far better than he did offensively in his first season in the SEC, as did the Gamecocks on the whole. An engaged defender with good size who rebounds the ball effectively, he gave up a bit more dribble penetration than one might hope, and uses his hands a bit too much on the perimeter, but played with a nice sense of urgency for stretches. His physical tools give him promising upside on this end, if he can cut down on his mistakes and improve his fundamentals.

P.J. Dozier is an interesting prospect with excellent physical tools who got the opportunity, for better or worse, to learn on the job last season. Frank Martin will look to Dozier to take the next step to help compensate for the departures of his team's entire starting frontcourt and three most efficient offensive players. It's a little early to speculate about what direction Dozier's game is heading. Whether his future is as a playmaker, or if he can take a page from the DeAndre Liggins playbook and rebrand himself as a lockdown defender who can spread the floor a bit, remains to be seen. With three years of eligibility remaining, Dozier has plenty of time to sort out those details and emerge as a viable NBA prospect.
Read full article