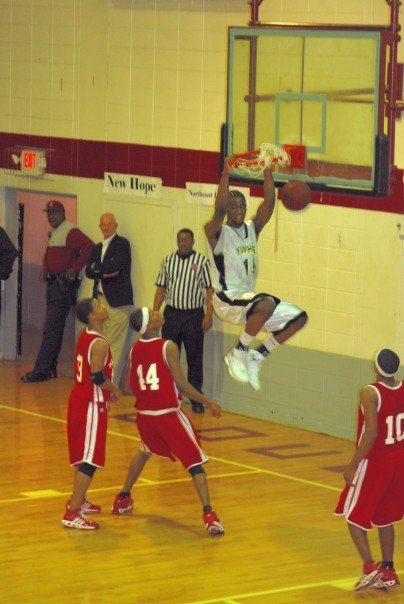 Joseph Treutlein
@DraftExpress
One of the higher ranked prospects at this showcase, Rashanti Harris (#17 Scout, #26 Rivals, # 37 ESPN) shockingly signed with Georgia State earlier this year, passing up high major offers to do so. Harris very much looks like a man among boys against this competition, being 69 with a thick and chiseled body, looking as physically mature as most college seniors. Hes very mobile, coordinated, and has excellent hands, while having pretty good explosiveness and quickness for a big man as well, being a very good athlete for a college big.

Harris makes his mark felt most on defense and the boards, where he shows pretty good focus, decent fundamentals, and is just able to exert his will against the competition. He frequently pulls down rebounds in a crowd, boxes out his man well, and on the defensive end, patrols the lane and plays tough post defense.

On the offensive end, Harris game is very much a work in progress, having an underdeveloped post game in terms of footwork and moves, often trying to just bull over opponents. He took a few perimeter jumpers over the weekend as well, but didnt have much success, though its something he could add to his game in time. Hes a threat in transition when running the floor, due to his size, mobility, and hands, but his conditioning is not superb, leaving many occasions where hes slow to get up the floor on either end of the court.

Many are questioning Harris decision to go to Georgia State in lieu of a high major school, and there is a lot of legitimacy to those questions, seeing how itll be tough for his post game to develop much against that level of competition, where hell rarely face a PF/C that is his physical equal in both size and athletic ability. It will be interesting to see how his game develops over his time in college, but its hard to see how playing against this level of competition will be better for his development than playing in a major conference.
Read full article

Jonathan Givony
@DraftExpress
We actually saw Rashanti Harris (#64 Scout, #112 Rivals) have one of his worst games at the City of Palms Classic, the day after battling Greg Monroe to a draw, so we got a bit unlucky in that regard. Regardless, we got the gist of what makes him a very interesting college prospect.

Harris has good size at 6-9, with an exceptional frame that already looks ready-made for college basketball. Hes a beast on the glass, showing great timing for offensive rebounds, a good second bounce, and very nice hands for a big man prospect. Hes a mobile guy who runs the floor well and can get off the ground to get after a rebound in or out of his area. Rebounding indeed seems to be his biggest strength at the moment.

A scrappy player defensively as well, Harris holds his own in the paint physically against anyone at this level and can come up with some on-ball blocks just by using his size and length. Hes not freakishly athletic or terribly skilled, though, relegating him to more of a hustle role unless he improves significantly over the next few years, which is not out of the question. Harris has average footwork and touch around the basket, but he didnt see much of the ball in the game we took in, as his guards were trapped nearly all game long and did a pretty poor job of feeding him inside.

Even with his obvious limitations, it was a bit surprising to see how low hes ranked by the recruiting services after the event (#112 on Rivals?). There are surely a lot of colleges who could use a big bodied guy like him inside, even just to play a Joey Dorsey type role at the next level. Guys like him arent exactly growing on trees it seems. Well have to see how he develops over the next few years before we know for sure if they were wrong.
Read full article

Rodger Bohn
@DraftExpress
Harris was surely one of the bigger surprises here at the LeBron James Skills Academy. Considered a borderline top 100 prospect by virtually every recruiting service out there, he came out and was absolutely fearless against big name players such as Greg Monroe, Samardo Samuels, and John Riek. Already owning an NBA body, the athletic big man was able to overpower nearly every opposing big man that he was pegged up against on the final day of the camp. He was the lone player who actually attacked the freakishly long Riek, attempting to go right through him and to the rim at every available opportunity. Harris lack of actual skill wound up hurting him at times however, as there were chances for him to take the taller Riek off of the dribble, but his lack of any resemblance of perimeter skills did not allow him to do so.

While Rashanti is not very polished at all on the low blocks, his combination of strength and athleticism immediately make him a name to keep in the back of your heads as time goes on. As long as he is able to develop one or two low post moves and a somewhat respectable jumpshot from 15 feet and in, there is no reason that Harris will not be on the NBA radar eventually.
Read full article